You are here: Home / Culture / Community / 6 Things to Do in Bend on Fourth of July Weekend

Summer is officially here. Kick off the season with these activities happening around Central Oregon this weekend. Here’s our list of favorite Bend Fourth of July activities, from classic traditions like the Pet Parade to watching the fireworks over Pilot Butte. 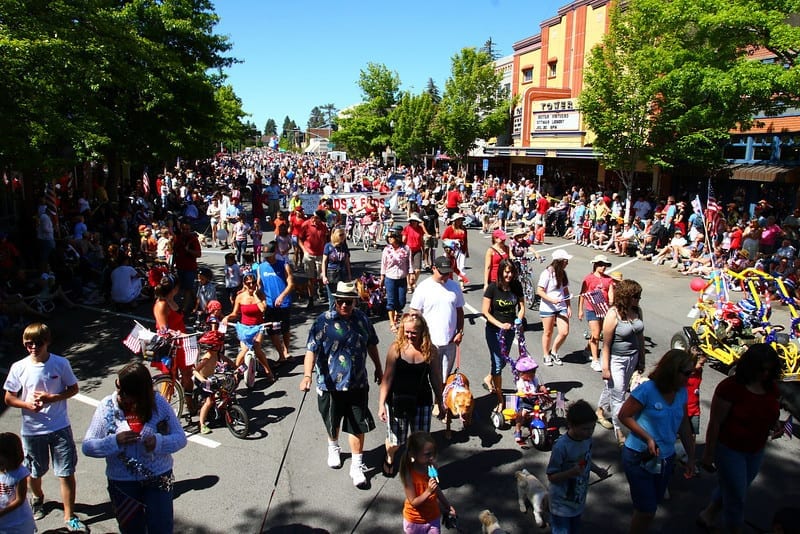 For the first time since 2011, Mt. Bachelor will open for JulySki, a special three-day weekend of skiing from the summit. Get your summer shredding fix at the mountain from July 2 to July 4. If you’re feeling adventurous, you can also trade your skis for your mountain bike and race around singletrack when you’re done.

Dogs and cats dressed up in Fourth of July gear is the just the beginning of the Pet Parade. You’ll also find horses, goats, alpacas, turtles, snakes and more through downtown Bend on the morning of July 4. The event is popular, so get there early, bring a chair and enjoy the parade of Bend’s scaly, furry and feathered pets, one of the town’s oldest traditions.

There are a couple of great options for music lovers this weekend that run the gamut. If you’re up for a road trip, the iconic Wheeler Bluegrass Festival begins Friday night and continues all day Saturday and Sunday. The festival includes music nearly a dozen acts, including Pitchfork Revolution and the Misty River Band, music, free workshops and more. The festival takes place on the grounds of the historic Wheeler County Courthouse in Fossil. Closer to home, the genre-bending Ween will appear at the Les Schwab Amphitheater for their only Oregon appearance. It’s party of a busy holiday weekend stretch at the amphitheater that includes appearances by Pink Martini on Friday, June 30 and capped by a July 4 appearance from hard rockers, the Deftones.

After the Pet Parade, make your way to Drake Park for the annual Old Fashioned Festival. Find arts and crafts booths from local artists and vendors, as well as games and outdoor activities that the whole family will love. Local food and drink vendors will be on site. Pick a spot in the grass and enjoy live music from local Bend musicians.

Locals know to avoid driving downtown on Fourth of July or risk getting in the middle of the Freedom Ride, Bend’s (unofficial) bike ride through the streets. Hundreds of people dress up in Fourth of July attire and ride bikes through downtown and the Westside to celebrate the holiday. You can join the Freedom Ride, too, which usually starts at Pioneer Park. If you’re around town on the day, you’ll probably run into the event anyways.

Each year, a fireworks show over Pilot Butte ends the Fourth of July festivities. With hot temperatures (especially this year), you’ll also be sure to see the encore presentation of the night: the ensuing fire that inevitably occurs on the side of the Butte. Not to worry, though, as the city’s firefighters are on deck to douse any flames. The fireworks can usually be seen from any high point at parks around Bend and is a perfect way to end the celebrations of the day.