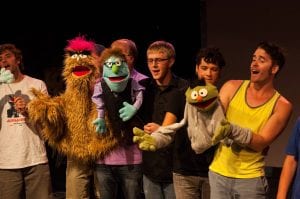 Ray Solley, executive director of the Tower Theatre Foundation, said that the annual Marquee Series showcases the best singers, dancers and musicians in Central Oregon. The musical score comes from the same composer as Book of Mormon. The script is by Oregon playwright Jeff Whitty, who also wrote Head Over Heels, premiering this season at the Oregon Shakespeare Festival. When Avenue Q made its New York debut in 2003, it won the Tony “triple crown” for best musical, best score and best book.

The show is a blend of human actors and puppeteers visible to the audience. The story follows a group of young adults—in particular a recent college graduate named Princeton—who live in a dilapidated neighborhood and struggle to find jobs, love and their way through life. The song, “It Sucks to Be Me,” sums up the situation. And peppering the plot line are two Bad Idea Bears that encourage irresponsible deeds.