You are here: Home / Business / Surfing on GolfBoards 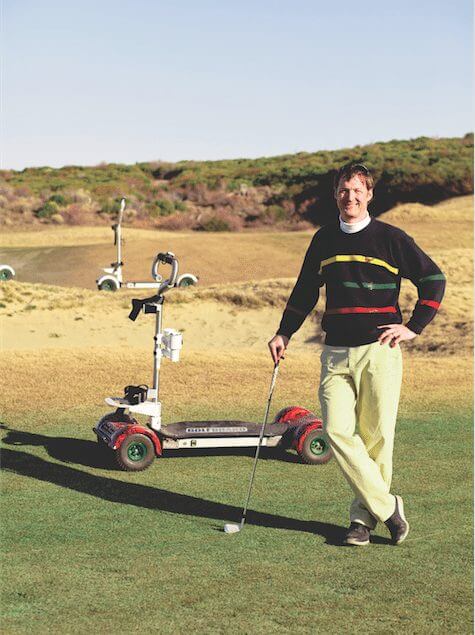 Jeff Dowell grew up in Bend, playing golf for Bend High School and Central Oregon Community College before moving on to Indiana State. His career in product innovation, technology and startups led him around the world and then ultimately back home nearly three decades later to his first love: golf.

Dowell became president of fast-growing GolfBoard in 2014. Originally inspired by surfing, the GolfBoard is a four-wheeled board that allows golfers to smoothly ride around the course, speeding up the game and adding another element of fun. In two years, the GolfBoard went from a relatively unknown product to a coveted novelty among hundreds of courses ordering up fleets of them.

“It’s been a crazy ride,” Dowell said. “We’ve had tremendous exposure and a significant amount of orders. Now we’re really crossing the chasm from early adopters into mainstream.”

The idea began with surfers who love to golf. Don Wildman, founder of Bally Total Fitness, and renowned surfer and athlete Laird Hamilton began experimenting with riding homemade electric boards around courses in Malibu and Hawaii years ago. They teamed up with Paul Hodge, a startup veteran who had moved to Central Oregon, as well as electric vehicle enthusiasts Star Faraon and Mike Radenbaugh, to help further develop the technology.

Hodge, a co-founder and board member of GolfBoard, described it thusly to American Golf magazine in 2013: “We initially used the boards for personal enjoyment, but every time we played on the courses, we were mobbed by people who wanted them. Eventually, we decided to develop a safe, fun, and easy-to-ride board that everyone could enjoy.”

The product has since gone through several iterations and improvements, Dowell says. The company honed in on the board’s safety, ensuring it was stable, and added a handlebar for balance. Most people get the hang of it within a few minutes. “It’s really intuitive,” Dowell said. 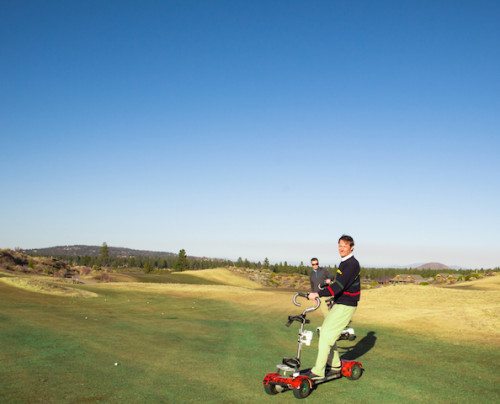 The concerns that Dowell initially fielded about the boards–that they’d be unsafe or hard to use—have abated after thousands of golfers have tried it and enjoyed it. None of the courses renting GolfBoards has reported injuries from them, Dowell said.

Indeed, the golf community appears to be embracing a product that not only speeds up the game, but has the potential to attract more young people to golf. GolfBoard has been featured on national television shows, has had a presence at tournaments, and is getting interest from international golf course management companies.

GolfBoard primarily sells fleets of the boards to courses and Dowell projects that nearly 200 golf courses will offer the product this year. Central Oregon courses include Tetherow, Awbrey Glen and Aspen Lakes.

Dowell anticipates that 2016 will be the company’s biggest sales year yet. “It’s been really well received, and people are excited about the potential for injecting new life and fun into the game.” he said.