You are here: Home / Culture / Community / Help Save Central Oregon’s Bees With A Backyard Bee Hotel

Each summer, many Central Oregonians plant and tend to butterfly gardens to attract beautiful butterflies to their yards. Yet there’s another backyard insect that, while often misunderstood, also can provide countless hours of entertainment in addition to helping pollinate plants. 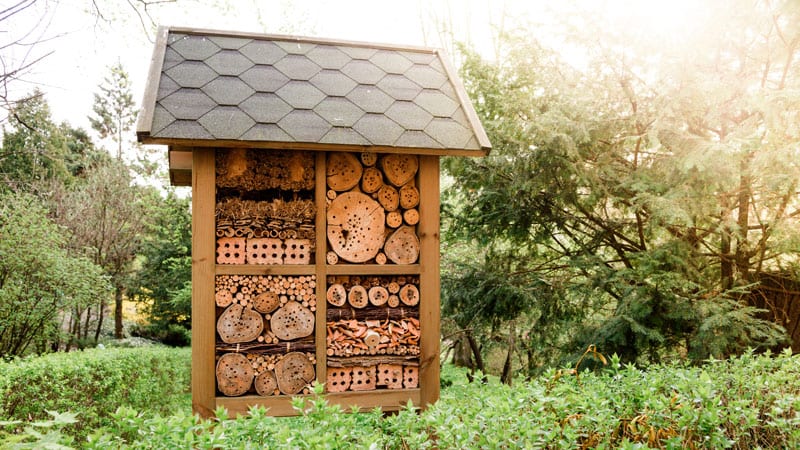 These are the bees, which often receive a bad rap, because they can sting. But Oregon State University Assistant Professor Andony Melathopoulos, a bee pollination expert, said most bees are not at all aggressive. And, he said bees could really use a helping hand from backyard gardeners to help them survive. 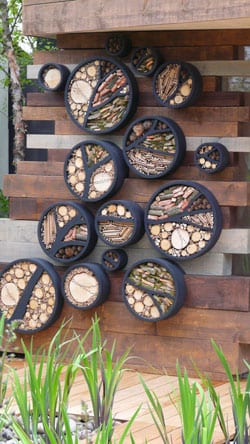 Bee hotels lend themselves to design elements like these circular shapes layered with color and texture, adding decor to your home exterior or other outdoor structure.photo the online Garden Planner, GrowVeg.com

One way everyday gardeners can do their part is to create a hotel—that is, a bee hotel.

“We have at least 900 bee species in the Pacific Northwest, with about 500 species native to Oregon,” said Melathopoulos. “Honeybees, which live in hives, are just one species. But 90 percent of bees live in hotels, which can be structures as simple as hollowed out reeds, or holes in the ground or an old log.”

These bee hotel spaces are typically found in nature, but as mankind encroaches and builds on more wild lands, bees are being displaced. Many are exposed to viruses and parasites that can wipe out whole bee populations.

Melathopoulos says we need to care about the fate of bees, because all bees are vital as pollinators—one out of every three pieces of food we eat is dependent on these pollinators.

Building a bee hotel is simple and can be as easy as using scrap wood or getting some old branches and drilling hotels in them. “The reason the bees need little holes or ‘rooms,’ is because each egg the female lays will be put into a separate cavity and then sealed with mud, resin or leaves, depending on the type of bee,” explained Melathopoulos, who said the mother bee will die off before she sees her offspring. “The bee will emerge from the hotel room or this cocoon in about a month, and the cycle starts all over again. People will be astounded when they slow down and pay attention to these bees in their hotels.” 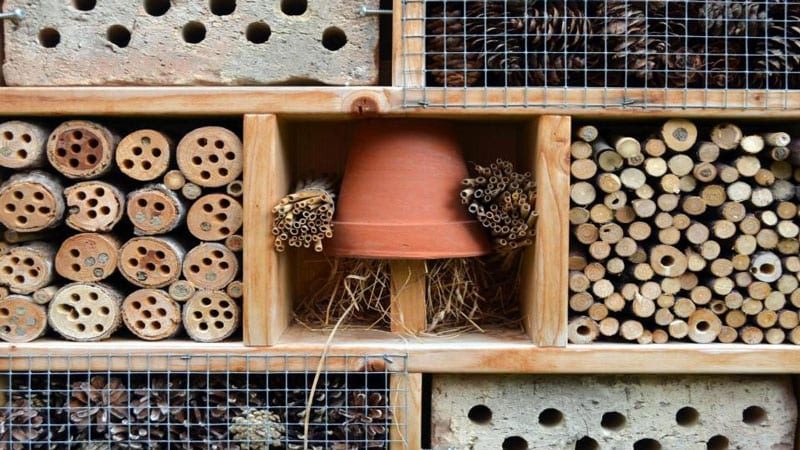 In one bee hotel, backyard gardeners may find several varieties of bee species. The bees all get along, taking rooms that are vacant and going about their business. Melathopoulos does caution that after the bees hatch or emerge from their rooms, you may want to clean the rooms or start new hotel rooms because viruses and parasites left behind in the rooms might endanger the next generation of bees.

Worried about inviting bees to share your backyard? Don’t be, Melathopoulos said. He points to several examples of bee hotels on the Oregon State University campus, and stresses the bees are very docile and don’t swarm or sting visitors to campus.

Bee populations have been declining globally. The United Nations National Assembly declared May 20 as World Bee Day to raise awareness of how important bees are for the world’s food supply. By its estimation, bees and other pollinating insects have a global economic value of about $150 billion.

Interestingly, scientists have found the recent world-wide shutdown because of COVID-19 has resulted in a beneficial environmental impact for bees, including a reduction in air pollution and degradation on natural bee hotels and habitat. As the world begins opening up, bee conservationists, like Melathopoulos, say helping our bees survive will be critical.