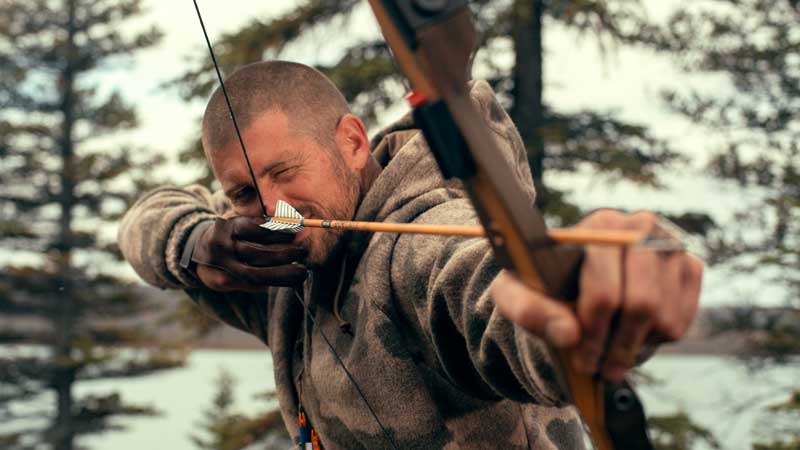 Photo courtesy of the history channel and A+E Networks®

If you consider yourself outdoorsy and haven’t caught an episode of the History Channel’s Alone reality TV series yet, which you can watch on Netflix and Hulu, you’re behind on your studies. The premise of the show is simple but stressful; ten people get dropped off at separate sites deep in the wilderness with ten items of their choosing, with instructions to survive for as long as they can or until a medical team says they must quit. What these bushmasters do to find food, stay warm and not go absolutely mental in the supreme solitude makes your Three Sisters through-hike look like a staycation at Loge.

Given Central Oregon’s outdoorsy cred, it is only fitting that someone from the area actually made it onto the series. About this time two years ago, Joel van der Loon, a survival skills teacher living in Sisters, was in the middle of season seven, holed up on a remote corner of Canada’s Great Slave Lake in the subarctic trying to live on his own for 100 days, which was the longest any contestant on the show had ever done up to that point. The prize for doing so? $1 million. 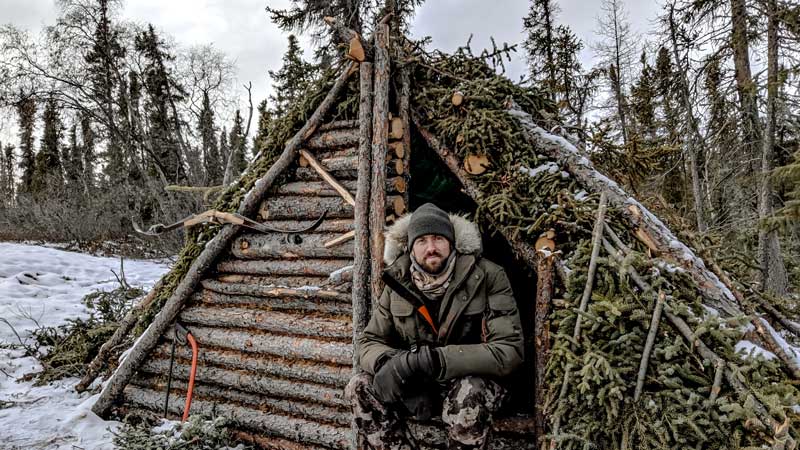 Cast members of Alone crafted their own shelters by hand using few tools and the natural materials available to them. Photo courtesy of the history channel and A+E Networks®

“I was just elated to be out there, like a kid in a candy store,” says van der Loon, now 36. “It was this amazing opportunity to combine all of my skills in this area that sees very little human presence with this fantastic safety blanket. If anything goes wrong, you can push a button and someone comes and picks you up.”

Adventure is nothing new to van der Loon, who approaches nature and bushcraft with an almost spiritual connection to ancient cultures. He grew up bouncing between a small sugar cane community in South Africa and off-the-grid in the Tanzanian bush before moving to Sisters via California four years ago. Learning how to survive in the wild as our distant ancestors did has been a passion of his since he was at least five years old. That’s when his grandfather, Desmond, gave him a bow from the San Bushmen of the Kalahari Desert that ignited a curious spark. 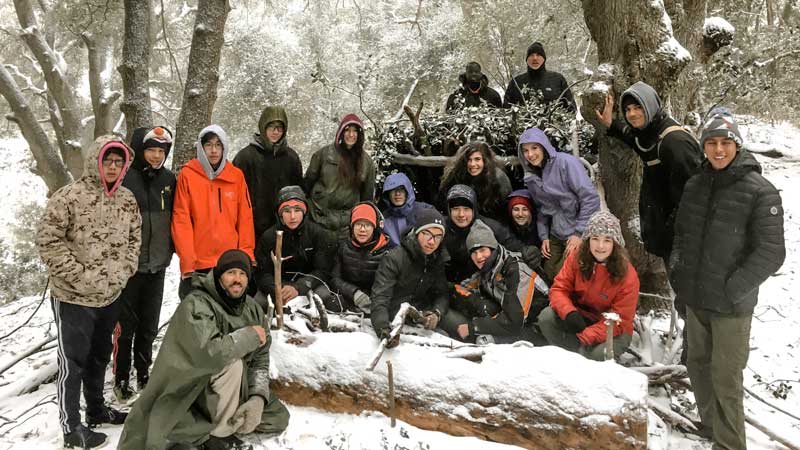 Joel teaching a class of school kids winter survival skills at on the Los Coyotes reservation of the Cahuilla and Cupeño tribes. Photo courtesy of the history channel and A+E Networks®

I was just elated to be out there, like a kid in a candy store. It was this amazing opportunity to combine all of my skills in this area that sees very little human presence with this fantastic safety blanket. If anything goes wrong, you can push a
button and someone comes and picks you up.

That spark turned into an inferno later when his father, John, a cave diver who survived being lost at sea, separated from his mother, Michele, a professional bodybuilder, and built a home in the African bush. To keep the wild animals off the property, his father hired Maasai guards who began to teach van der Loon how to hunt, track, start a fire and other survival skills.

“I was just fascinated by them,” he says. 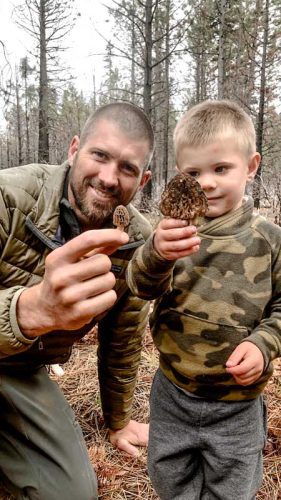 Joel lives in Sisters with his wife, Leah, and their four-year-old son, pictured here on a Central Oregon morel mushroom hunt. “Mushroom foraging is a great way to get kids engaged in the forest.” Photo courtesy of joel van der loon

For three years van der Loon ran a full-time survival school in California—he still teaches once a month while working as a heating and cooling technician—but it wasn’t until 2017 that Hollywood noticed his skills. Producers at Discovery Channel tapped him to be a participant on a show called Bushcraft Build-Off, whereby he and two friends had to build a boat using only an axe, a chisel and the natural materials in their immediate surroundings. “It was a great experience but not a survival experience,” he says. “I mean, we got fed.”

That wasn’t the case on Alone. A friend of his, Dave Nessia, had appeared in season three of the show and recommended van der Loon as a candidate for a future season. van der Loon jumped at the chance. Of the thousands of people who applied, he was one of dozen to make the shortlist and one of ten to actually participate.

Van der Loon had no idea where he would be sent until about a month before filming began. In preparation, he packed on as much body fat as he could. Participants were then randomly assigned sites around Great Slave Lake and given a very brief helicopter tour of the area. Crews staying at a fishing lodge in the region would physically come out to check on him every ten days, and he had mandatory morning and evening check-ins via a satellite device. Otherwise, he was there alone and filming the experience himself with broadcast-quality camera gear he had to lug around everywhere he went. “A pain in the butt,” he said.

The show is strangely addicting. Throughout the course of it we watch van der Loon build a shelter straight out of eight-year-old boy dreams. We see him catch a surprising number of fish. And
then we watch on tenterhooks when a wolverine, well…let’s give
away no spoilers here.

And would he do it all over again?

To learn more or sign up for a survival class with van der Loon, see bushsurvivaltraining.com.