Gearhead. Gear junkie. Gear nut. No matter what you call it, outdoor enthusiasts love their gear. But how much gear is too much gear? Across the clothing industry, it’s estimated that more than 100 billion items of clothing are produced each year across the globe. That’s nearly fourteen items for each person on the planet. Sadly, fewer than one percent of these items are made from recycled garments, and many are discarded without ever being worn. According to a report by the Ellen MacArthur Foundation, over ninety-two tons of textile waste are sent to landfills each year—roughly one garbage truck every second of the day. 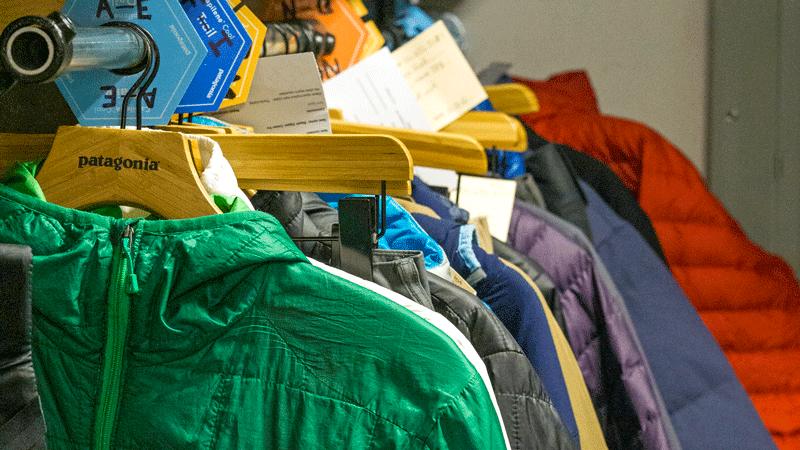 Though much of the waste in textiles is produced by fast fashion, the outdoor industry produces its fair share. But the good news for gearheads is there are environmentally friendly ways to still rock more than one puffy. In fact, it’s something many of us were taught in grade school—Reduce, Reuse, Recycle.

It’s this second ‘R’ (reuse) that’s been gaining momentum for several outdoor businesses in Central Oregon. Upcycling, consigning and repairing used outdoor gear is a good business model because—let’s be honest—outdoor gear is expensive and there’s a demand for cheaper quality alternatives. But more than that, it’s a way for people to feel good about making choices to extend the life of outdoor apparel and make an impact on the planet through their purchasing decisions.

Here we profile four local businesses making a difference by giving garments a second chance—and giving some outdoor enthusiasts a first chance in the process.

Launching Rugged Thread out of her garage in 2019, Kim Kinney first wanted to remove the stigma to being a seamstress. “There was always such a negative connotation,” she said. “I wanted to bring sewing back as a legitimate skill.” 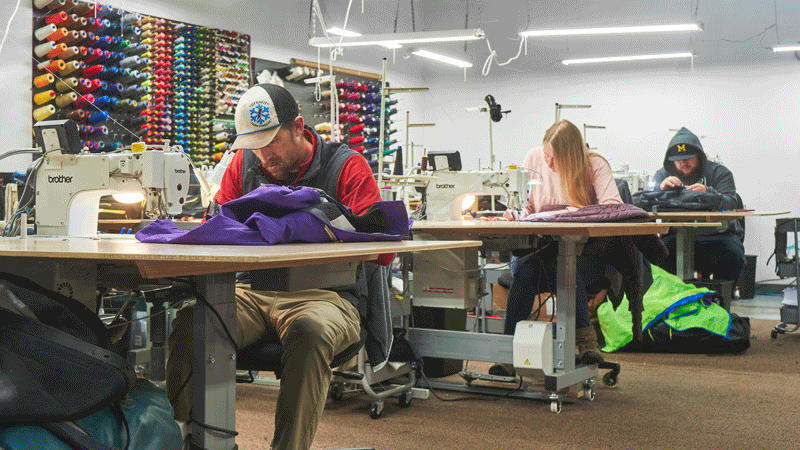 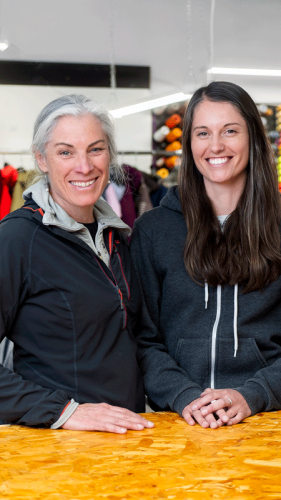 Kinney did that and then some. Rugged Thread now has six full-time employees and is repairing gear for consumers around the country, as well as serving as the repair shop for established outdoor apparel brands such as Burton, Trew Gear and Descente, among others. Kinney said she focused on creating a scalable model through detailed, standardized repair procedures and streamlined processes. “We have in-depth training programs so people can become some of the best technicians in the country,” she said. “This allows us to pay family wages and provide opportunities for people who may have otherwise not had access to those skills.”

Whereas Kim’s passion lies more on the social end, her daughter Josie, the company’s director of development, has her eyes—and heart—set on the environment. “There is an overwhelming need for businesses to reduce the impacts of climate change,” she said. “I’m always inspired to see businesses change from a linear model to a more circular one.”

Josie said Rugged Thread puts this into practice by helping both consumers and brands extend the life of the gear they love and use. To date, she estimates that Rugged Thread has saved around 40,000 pounds from going to the landfill. “People get attached to their gear, and the interesting thing is that if you repair a garment instead of replacing it, it helps with the over extraction of raw materials, overconsumption and over production, which helps to reduce the overall CO2 emissions.” In short, a win for the consumer and the environment.

Owner Josh Simms’ passion for the outdoors was ignited as a youth when in sixth grade he attended an outdoor program through the Oregon public school system. The experience was a transformative one and set the foundation for a career in the outdoor industry. In his 20s, Simms worked at Repeat Performance Sports, one of Bend’s earliest gear resellers whose focus was sales of used team sports equipment, such as golf clubs, baseball bats, racquets, etc. While working there, he saw an opportunity to upcycle more apparel and specifically that of outdoor brands. After multiple conversations with the owner, Simms eventually bought the business in 2008 to try his hand. 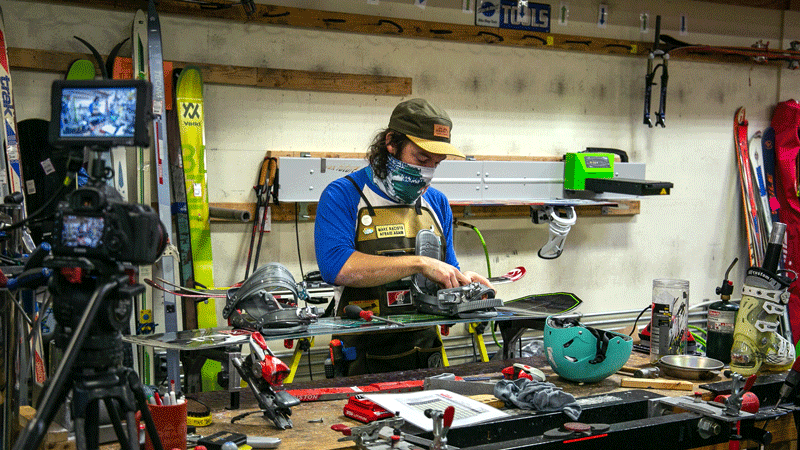 Ski shop at The Gear Fix

Simms said from the beginning he wanted the business to be about accessibility and getting people into the outdoors. “I wanted other people to be able to see how transformative outdoor experiences could be,” he said. “Gear is a big part of that experience.”

Eventually, Simms changed the name to The Gear Fix, shifted the model to focus more on reselling and repairing outdoor gear, and the strategy worked. Today, The Gear Fix has twenty-five employees, includes a large retail space selling used outdoor gear, a bike shop, ski shop, shoe/boot repair and apparel repair. Since the shift to The Gear Fix in 2014, Simms said the business has upcycled over 800,000 items of outdoor gear and repaired more than 40,000.

Mapping back to Simms’ original goal of getting more people outdoors, The Gear Fix also works with local nonprofits through its give back program, in which consigners can direct the proceeds of their used gear to a 501(3)c. To date, The Gear Fix has donated more than $100,000 and rehomed more than 5,000 items to dozens of community organizations in Central Oregon. The success of the program also spawned a similar partnership and program with Cairn Inc., now part of Outside Media Group, called Gear Up Give Back, which recently received a prestigious Innovation Award at the Outdoor Retailer Show in January 2022 for the roughly $100,000 raised for national nonprofits during the span of 2019 – 2021. 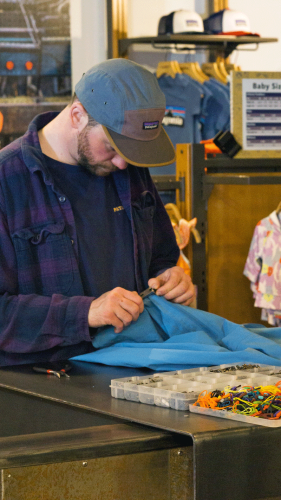 When store owner Rod Bien partnered with Patagonia to open the first privately held brand store in 2003, he was fully bought in all fronts of the outdoor apparel brand. “We really tried to adopt all the programs that Patagonia had, including Worn Wear when it was introduced,” he said.

Worn Wear originally started as a series of pop ups around the country but the success and reception eventually led to its permanent online launch in 2017. Doing repairs, upcycling into “recrafted” gear (new gear created from used materials) and trade-ins, Worn Wear has quickly grown into a massive operation. So big, in fact, that Patagonia now operates the largest apparel repair facility in North America.

Bien said the program works similarly at the Patagonia Bend store. “If someone’s not using their Patagonia gear, they can bring it in for credit at our shop, or trade it in online at the Patagonia website or the Worn Wear website,” he said. “We average between 100 and 200 units a month that we send back to Patagonia to be given a second life.”

According to Patagonia’s website, purchasing used gear extends a garment’s life by approximately two years, which in turn cuts its combined carbon, waste and water footprint by 82 percent. Bien said that Patagonia is always trying to close the loop. “They’re awesome working with us,” he said. “Anything they can do to help they’ll do it.”

Stand on Liquid owner Rob McDonald was looking for a way to keep his employees staffed and busy during the winter months. When he found himself looking for deals on gear to outfit his three competitive ski-racing daughters, he realized the idea was right in front of him. 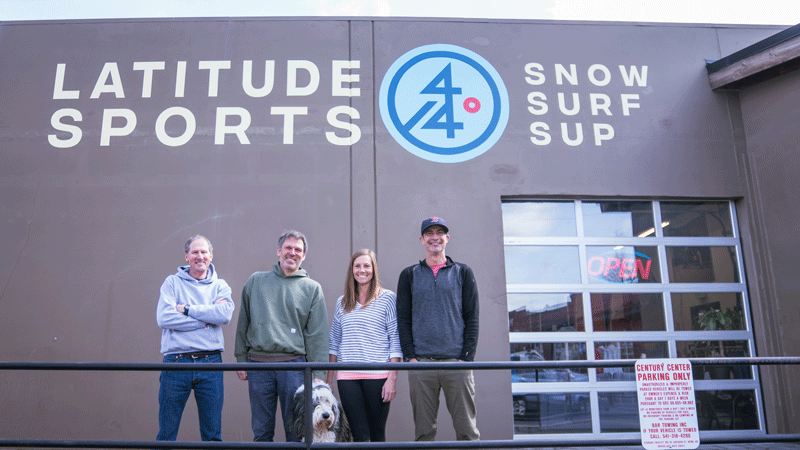 “Every year, youth need new sizes and new equipment,” he said. “I found myself looking for quality gear every year but needing something less expensive than buying it new.” McDonald said the realization led to expanding Stand on Liquid to include Latitude 44 Sports, a used gear and consignment shop focused specifically on winter gear and apparel.

McDonald said the store prides itself on quality gear that will last for consumers. “We have a slogan: ‘No funk, no junk.’” he said. “The gear must be clean and functional. We want a certain quality.”

He said he’s seen the store and interest grow each season since Latitude 44’s opening in 2018 (Stand on Liquid opened in 2010), and it’s rewarding to extend the life of good gear. “I love my business,” he said. “Helping people make money on their gear and getting more people outdoors is what it’s all about.”

• Fix and repair your gear! And maybe learn a new skill in the process.

• Buy secondhand gear for yourself and your family. Central Oregon has so many options!

• Proper washing and care. Seems simple, but it’s worth saying: your gear will last longer if you follow the instructions on your label.

• Lighter is not always better. Lightweight gear tends to break down faster and need to be replaced faster. Consider the heavier weight garments to make it last.

• Waterproof your Gore-Tex, Tyvek and coated nylons every six to twelve months to make them last longer. A variety of economic waterproofing sprays and washes are available at most outdoor stores.