You are here: Home / Culture / Community / A Breed Apart: Dolly DeCair Was Born To Ride, And Ride Fast 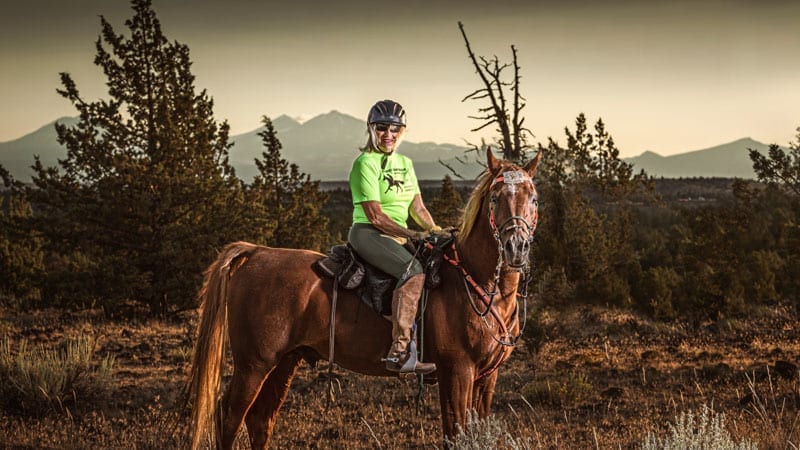 A slim, five-foot, four-inch-tall, platinum blonde with hot pink lipstick, red, fitted t-shirt and lavender riding tights slides her boot into the stirrup of a chestnut stallion, his muscles rippling. She whispers in his ear, “Mama’s gonna try and not scream now,” as she throws her leg over the latest in her line of champion stallions, which in the last forty years she’s raced roughly 7,500 miles. Simply mounting the Arabian reminds Dolly DeCair of her two hip replacements, the most recent done last year.

But at 83, with 100 top-ten endurance race finishes — including a second-place finish at age 65 in the world renowned 100-miles in twenty-four-hours Tevis Cup — to her, there’s no other option than to push through the pain. She was born to ride, and ride fast — even on Tevis’s narrow trails through remote mountain wilderness, with riders racing to the finish in the dark.

Known for her speed, her flair, and for slowing down to help others on the trail, the Crooked River Ranch “blonde at the O.K. Corral” as friends call her, has been inspiring riders throughout the West’s endurance racing community. That includes locals who’ve gone on to dominate in Tevis, known as the world’s most difficult endurance ride.

DeCair even sped into the world, born prematurely, and was called Dolly because of her toy-like size. When she was five, her mother died of kidney disease, leaving her father to raise his three children on his own in Central Park, Washington. He worked constantly as an electrical engineer for a lumber mill and was strict.

“He was the kind of dad that ‘no’ meant ‘no,’” DeCair said. “But I never gave up on a horse.” When she was 12, they saw one for sale, and he let her take it for a ride. The only way she could get the horse to stop was to run into the side of the barn. She seized her opportunity and told her father she loved the horse, although she never could teach her to stop. “I’d just bail off.”

She never had the money for lessons. “I just got on and rode,” she said. “The only thing I had going for me was that I wasn’t scared.”

It’s the 1980s, and Dolly and her husband Bill DeCair are living in a one-room bungalow at Ace in the Hole, a boarding facility run by a gambling addict in the Almaden Valley of San Jose. Endurance riding legend Virl Norton is living across the street and taking on horses that people gave up on. “It was his place or the meat factory,” said DeCair, “So he’d call them ‘Alpo’ and ‘Thriftway,’’

“I learned so much from him. I rode all his insane horses ’til I got one.”. 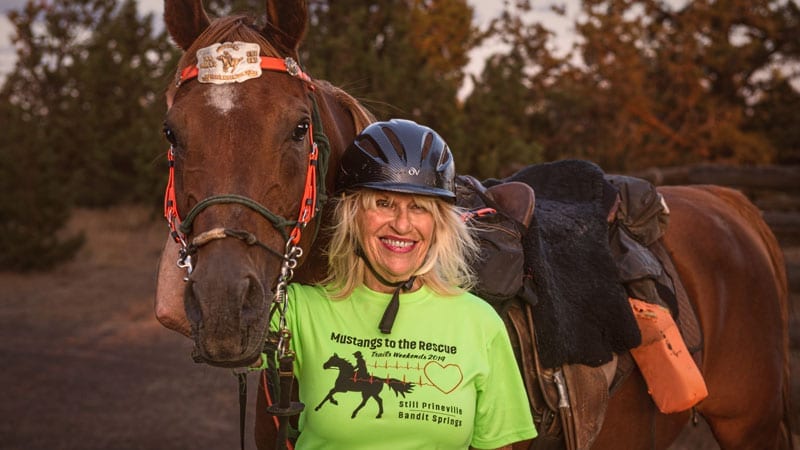 She sees Wazir’s Karahty, a five-year-old, copper colored chestnut Arabian stallion with a long mane, tail and athletic physique. He’s completed several endurance races, but the owner doesn’t think he’s fearless enough to ride the horse to its full potential. “He said, ‘Well, I know you’ll ride the piss out of him, and he won’t want for a better home,’” said DeCair.

Wendy Lumbert, who writes for Endurance News, a monthly published by the American Endurance Ride Conference, called Karahty “the greatest U.S. Endurance racing stallion that ever lived. Even though Wazirs Karahty and his remarkable owner and rider, Dolly DeCair are not highly publicized, statistics prove that both were superstars.”

Karahty’s last finish was in 1992. He completed 54 of his 55 races (an achievement, considering races such as Tevis Cup have a roughly 50 percent drop-out rate). Together, DeCair and Karahty had thirty wins with twenty-one Best Condition awards (based on designated check-ins given along the trail by a team of expert equestrian veterinarians). These were in prestigious fifty- and 100-mile races: Karahty won the North American Championship at Swanton Pacific riding against the famous world champion horse, Rio. DeCair rode with broken ribs.

DeCair recalled taking second-place in the historic Tevis Cup in 2000. She stopped at the final vet-check, seventeen miles from the finish at Francisco’s, a two-acre, natural meadow overlooking Oregon Bar, named for a party of Oregonians who found gold there in the summer of 1848. The vets had checked Amadeus’ pulse and respiration and DeCair was cleared to go. “I knew I had my chance,” she said. “But he was so hungry, I couldn’t get his head out of his mush.”

When they got back on the trail, they began fording the American River, with DeCair putting her legs atop the horse to keep from getting wet. She could see the headlamp of her rival ahead in the pitch darkness, the moonlight obscured by trees. “Most riders say it’s the scariest part,” DeCair said. “It’s the funniest sensation, going full blast in the dark. You have to trust your horse. You can’t see, but they can.”

She knew Amadeus’ competitive nature, and that only something serious would let him tolerate another horse ahead of him. “I could never forgive myself if I’d ignored what he was telling me,” DeCair said. Your first responsibility is to your horse. You can kill yourself if you want, but don’t kill your horse.” They finished in twenty-three hours, sixteen minutes — eighteen minutes behind the winner.

Wendy Lumbert, an endurance rider in Cool, Calif., and formerly of Alfalfa, said, “The really amazing thing about Dolly, however, is her perseverance. She has ridden fifty miles with a broken arm. One year she broke her leg badly, and as soon as it healed, she was back in the saddle. Hip replacement, terrible injury to her forearm, back surgery, loss of her beloved husband and now, in her 80’s, Dolly is still out there competing on a stallion.

“She works through the pain, the loneliness, the brutal work of conditioning horses in Bend winters and hot summers,” Lumbert said. “Her love of horses and endurance racing carries her through. You have a real living legend there in Central Oregon with Dolly, 83 and still racing her stallion on twenty-five-mile rides. Amazing.”

“Dolly was trotting along about eighteen miles per hour. My horse was galloping so fast the wind in my eyes made them fill with tears, but he wasn’t catching up. Dolly turned her head and yelled back at me, ‘Do you want to canter now?’ I laughed so hard I nearly fell off, and yelled back, ‘You go ahead Dolly!’ and they took off like being shot out of a cannon.

“That’s what happens when you take your VW to the Indy 500,” said Lumbert. “And yet in the two decades I’ve known Dolly, she has never bragged or said anything more than what an honor it’s been to have had her fantastic horses. What an inspiration.”

Wasch Blakeley of Terrebonne met DeCair shortly after she moved here from California in 2001. Blakeley, a Jehovah’s Witness, was going door-to-door, spreading the faith. He knocked on DeCair’s door, not knowing she was already a devoted follower. Instead, it was DeCair who did the preaching—about endurance riding. 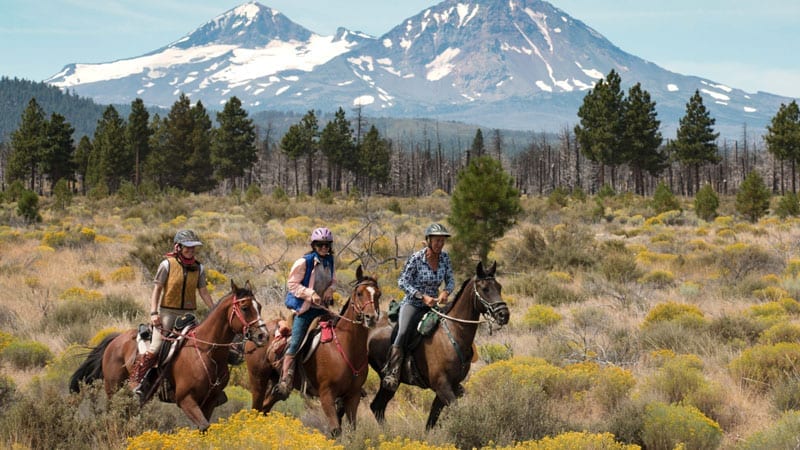 “It sounded awesome,” said Blakeley. “I’d just done pleasure riding. A year or two after meeting, we did our first twenty-five-mile race and then we were just hooked. We thought, ‘Wow, this is a lot of fun.’ We could hardly walk up our stairs at night.”

The Blakeleys have gone on to Tevis Cup success. Blakeley’s wife, Gabriela, finished second and Wasch finished third last August. Their son Barrak, 20, finished fifth last year. In 2014, as a junior racer, Barrak won the event’s other major trophy, the Haggin Cup, awarded to the rider whose horse is in the best physical condition of the first ten finishers. The Blakeley’s daughter, Sanoma, 18, competed with the rest of the family when she was at the minimum race age, 12.

Nina Bomar of Malibu recalled the impression DeCair made on her when she was a teenager at a Southern California endurance ride about forty years ago. “She was known as the wild and crazy girl who rode fast on a stallion and won most of the time,” she said. She thought Karahty was magnificent and DeCair’s bright red spandex riding pants were fun.

“Most outstanding of all, she wore a big beautiful smile and had a visible, hyper energy that surrounded her … The next day, Dolly won that ride and I got to see her for a few brief seconds on the trail as she and her horse thundered by us as if we were standing still. I’ll never forget the energy I felt from their presence — it was powerful. I recall thinking that they could have swept me and my horse off the trail and sucked us into their tailwind as it was that strong.”

For DeCair, the bond between a horse and rider during fifty and 100-mile races is incomparable to other riding events. “You overcome so much in yourself and your horse — the heat, the weather, the trail, you can’t give up,” she said.

Today, she finds that acting as her own support crew for twenty-five-mile rides, keeping her truck and trailer running, plus paying the entry fees, is almost as difficult as racing the Tevis Cup. “It’s a humbling thing,” she said. She pointed to a meme on Facebook that read: “I ride to escape this world. I ride to find peace with myself. I ride to feel free and I ride to feel strong.”