You are here: Home / Home / A creative pole-barn conversion inspired by the desert environment

Architect Pauline Lyders landed the job of her lifetime—designing the dream home for her family. “We succeeded in creating something unique to us but very livable,” she said of the renovated pole barn that she and her husband, David Neidorf, along with their two daughters, moved into last year. “There’s nothing precious about the materials we used—it is just what it needs to be,” she said of the elegant, modern-minimalist dwelling. 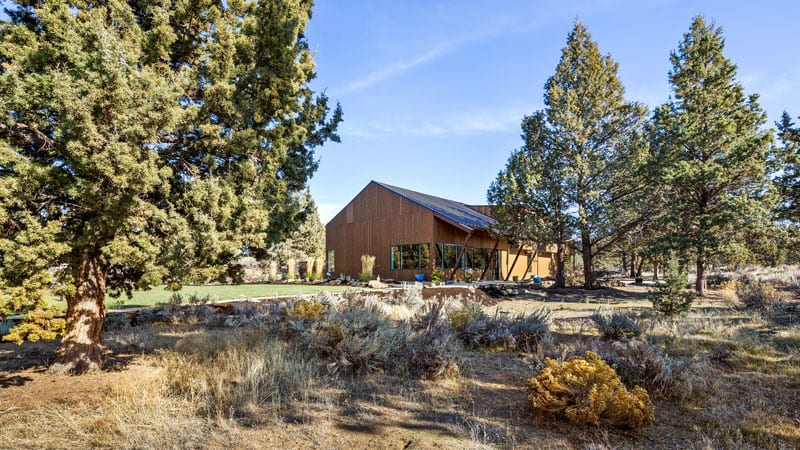 The couple moved to Bend from Los Angeles in 2011, and bought the barn, situated on ten acres off the Old Bend Redmond Highway, in 2016. Instead of seeing a plain structure amid the junipers, they imagined a living space integrated into the environment. Neidorf credits his wife for achieving their goal, but she sought his input throughout the process. “Truth is, David was my client,” she said.

The third partner in the conversation was Jason Duckowitz of Contour Design Build. “It was really important to Pauline to have a builder with an appreciation and understanding of design and who was part of the project from the beginning,” he said. “The three of us had a nice back and forth. I’d sometimes tell Pauline that a design might not work from a construction perspective, but she’d hold onto a concept, and she was usually right.”

The two-story layout is conventional in some ways, with a large, open room on the main floor incorporating the living, dining and kitchen areas and master suite with a private patio. The upstairs has kids’ rooms, an office, studio/guest bedroom, lounge and a deck. But creative flourishes abound in the 3,900-square-foot home, making it unique to the Lyders-Neidorf family. 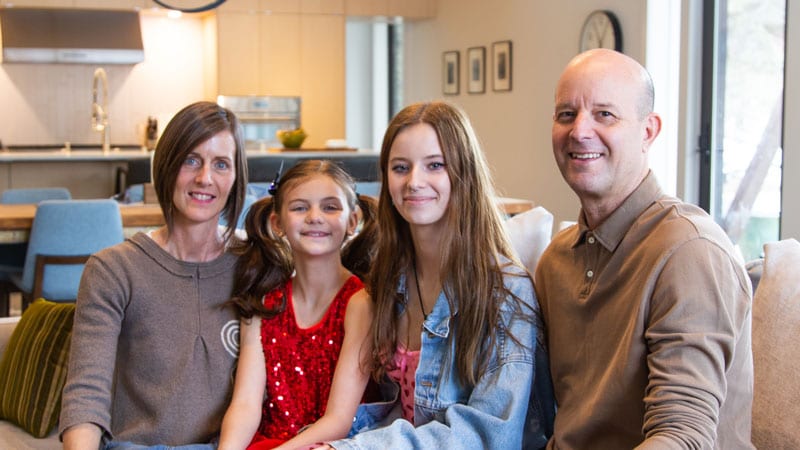 When Neidorf heads to his office, he gets there from the master bedroom up a winding staircase. This unique and private entrance is for him alone—a place from which he runs his own property management company, Full House Consulting, Inc. He loves the office with its large north-facing window overlooking another beloved feature—an outdoor hot tub accessed either from the bedroom or directly through a sliding LaCantina door in the master shower. 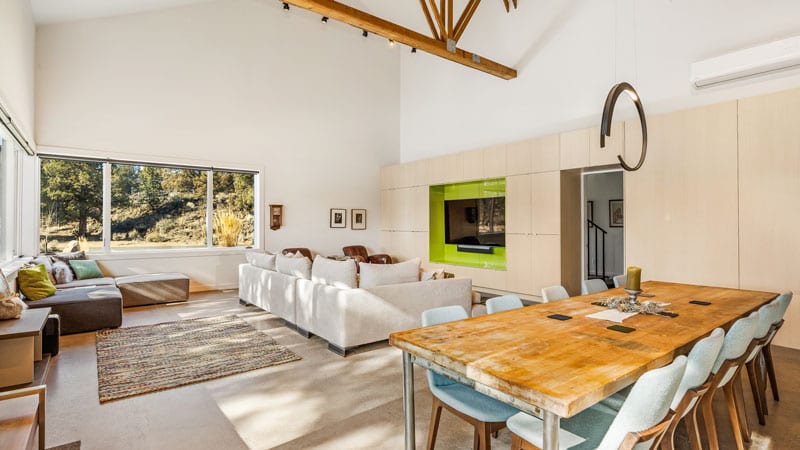 An open aesthetic blends the living and dining areas on the main floor.

Duckowitz says it’s the first time in twenty years of building homes that he’s seen a sliding door in a bathroom. “It was important to Pauline to maintain an indoor-outdoor connection, both visually and physically to the space outside. The door through the shower was the simplest way to achieve that,” he said.

Without an attic, Lyders was free to design the second-story rooms with a combination of sloping roof and 10-by-10-foot cutouts or dormers, allowing for insertion of 10-foot-wide windows in each room. “When you sit in one of the upstairs rooms and look out those full-height windows, you feel like you’re outside,” Duckowitz said. 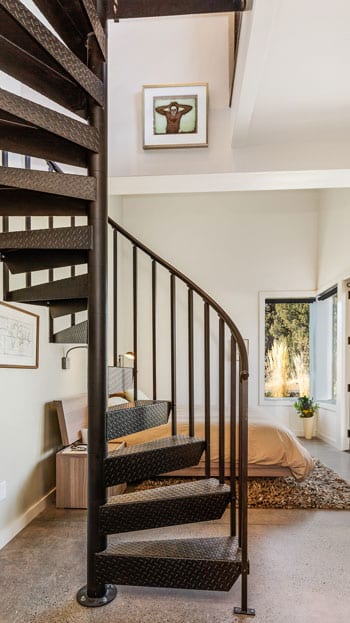 The couple’s daughters, Adin, 15, and Stella, 9, have bedrooms the envy of any child. “I tell my daughters they have the nicest rooms any kid ever had,” Neidorf said. Each is expansive, providing space for a queen bed, sofa, desk and areas for projects, games and music. Their mother also incorporated perhaps their favorite feature—a sleeping loft up a vertical staircase (Adin’s ladder is tucked in her closet). A small “sky” window in Stella’s room looks down into the living room and “gives her a sense of comfort and connection to be able to see us,” Lyders said.

The kitchen, dining and living rooms are spacious, with two of the barn’s original trusses exposed to honor the structure’s history. A series of tall windows faces the outdoors on two sides. Along the living room wall, a lichen-green recess houses the TV; another lichen-colored recess next to the dining room is for a bar and espresso machine. The bright green color matches the lichen that grows on junipers. A recess with neutral white vertical tile in the kitchen is for the range, oven and hood. A 14-foot, Caesarstone island divides the kitchen from the dining room where the family enjoys meals at the long antique baker’s worktable. The wool dining chairs are the color of blue juniper berries.

Large portraits of the daughters hang high on a wall and “make the room,” according to Neidorf. He commissioned Xander Berkeley, a well-known character actor and friend of Neidorf’s when he worked in film and TV, to paint the girls.

One of the family’s favorite spots is a covered deck off the second floor looking east over a pristine desert landscape. “It’s a place to meditate,” Lyders said. “Downstairs is about moving and engaging with each other. Up here it’s about witnessing nature.” The spiral stairs from the deck match the green-gold moss growing on rimrock. “It’s an escape hatch for my teen,” Lyders joked. 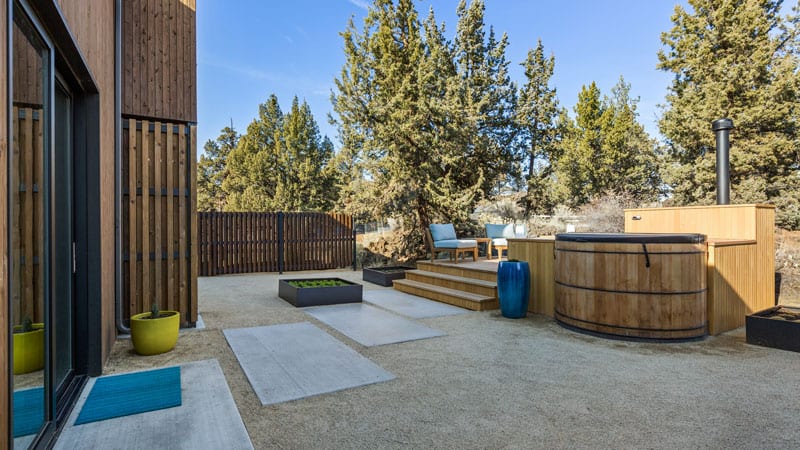 The pole barn’s exterior gable shape remains largely unchanged, although the new design lengthened the structure by 36 feet to include the garage and deck addition. “The easiest way to stay true to the structure and create a covered walkway from the parking lot to the main entrance was to follow the pitch of the existing roofline to the ground,” Duckowitz explained. “It tells a story of what the house was built from and draws you to the entrance.” With another nod to nature-inspired colors, the dark brown cedar siding was chosen to blend with the bark of juniper.

The creative collaboration between builder, architect and “client” resulted in a family home unique to its inhabitants while honoring its placement in the environment. “I live in my dream house that my incredibly talented and beautiful wife created,” Neidorf said.