You are here: Home / Home / A Riverside Home Remodel for Bend’s Bowerman Family

It’s hard to imagine a home more perfectly aligned with a family’s narrative than the Jayson and Megan Bowerman home located on the Deschutes River between the Bend Whitewater Park and Drake Park. The renovated residence blends a historic Craftsman bungalow with a contemporary addition for a home befitting their love of the river and the eclectic neighborhood of “Whiskey Flats” in the heart of Bend. 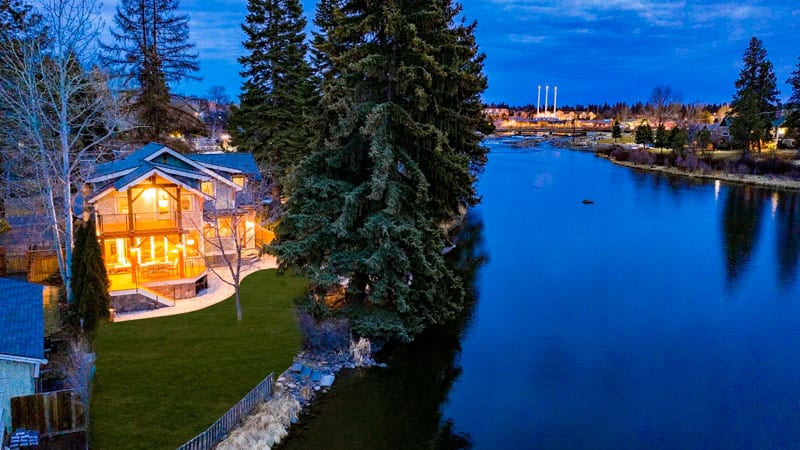 “I literally grew up in the bottom of a canoe,” said Bowerman, who was raised in Sunriver. “The Deschutes River has been my teacher my entire life, as well as my training grounds when I was a competitive whitewater kayaker as a young man.” As a member of the Bend Paddle Trail Alliance, he helped raise community support and funding to build the whitewater park before its completion in 2015.

Megan and Jayson met while Jayson was living near Tumalo, from which he felt “enslaved to my steering wheel while driving to Bend all the time.” Meg was living only blocks from where they currently reside, and Jayson realized that he had a “deep need” to be back in the heart of the community.

The couple bought the home in 2013, believed to have been built by Bend ski pioneer Nels Skjersaa in 1917. They loved the location and the structure’s historic roots, despite the dilapidated kitchen and the cottage’s small size (1,040 square feet). In 2016, with their first child on the way, they hired longtime friend and home designer, John Jordan, to envision a remodel that would preserve the original house as much as possible, while integrating a new two-story addition. 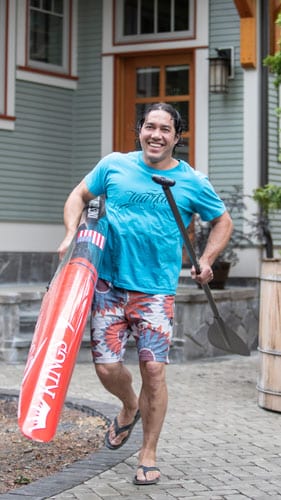 Creating enough space for a growing family would hardly be a straightforward task since the footprint of the dwelling would be tightly constrained by the small lot size and a forty-foot riparian setback from the river’s steep, diagonal bank, as required by Bend city code.

The first major decision was what to do with a beloved detached “boathouse” near the water’s edge. In 2015, the boathouse had flooded, and Jordan suggested that if they demolished the structure, new design opportunities would open up. The Bowermans decided to tear it down.

The next big decision was what do with the century-old house—demolish it too, and start anew, or preserve the old? The structure wasn’t square to the property lines, it had been sitting on soggy, water-table soil and a new roof installed in the 1990s was underbuilt. The builder they chose, Dean Edleston of Monolithic Builders, faced many logistical challenges, including finding a drop site for materials and tools, parking for subcontractors and bringing crane to the site multiple times to supply the addition.

But the character, history and appearance of the home were important to the Bowermans, and consistent with the neighborhood, so they decided to build an addition that would straddle a second story over the original craftsman and create new space extending off the backside.

Jayson said they spent two years developing plans and let the architectural vocabulary of the early craftsman—from gables and molding to door styles—dictate overall design. To tie the two structures together, the design would match roof pitch, siding and windows and copy bracing and other features of the original home but in a larger, more contemporary format throughout the addition.

In 2018, with permits in hand, they demolished the master bedroom, kitchen and sunroom. They removed some of the original lath and plaster walls and parts of the hand-stacked foundation to incorporate structural steel framing to support the second story. “It was a big job,” Edleston said, adding that Bend Welding spent a couple days bolting the steel supports to the foundation.

The remodeled home would end up with 2,700 square feet of combined space encompassing four bedrooms, three-and-a-half baths, laundry and mud room, with river views from nearly every room, as well as two covered decks.

Exterior colors—aspen bark and red clay for trim and sage green for the body—create a seamless impression from front to back. “The plan was to make the new and old look like they’ve always been there,” Edleston said. “Kudos to John and Jayson who spent a lot of time on the initial designs.”

The final layout retained the front porch and front door, which lead to a “pick-n-parlor” music room. Jayson completed a luthier apprenticeship with Kim Breedlove in the mid-1990s and after fifteen years at Breedlove Guitar Co. went on to form Bowerman Guitars. Today he handcrafts custom guitars, mandolins and other string instruments for musicians worldwide.

The historic first floor also includes a guest bedroom, bath, mechanical room, and utility and laundry room. A hallway ushers guests out of the traditional bungalow into a contemporary craftsman structure with 21st century amenities and upgrades. The wood-beamed great room is cozy yet open. The panoramic four-panel glass (yes, glass) door opens wide to extend the living room outside to the covered deck in warm weather. A mudroom with lockers for each family member is conveniently accessed from the kitchen and leads to the garage and backyard. The second story, which overlaps part of the original structure, contains three bedrooms and a deck off the master. 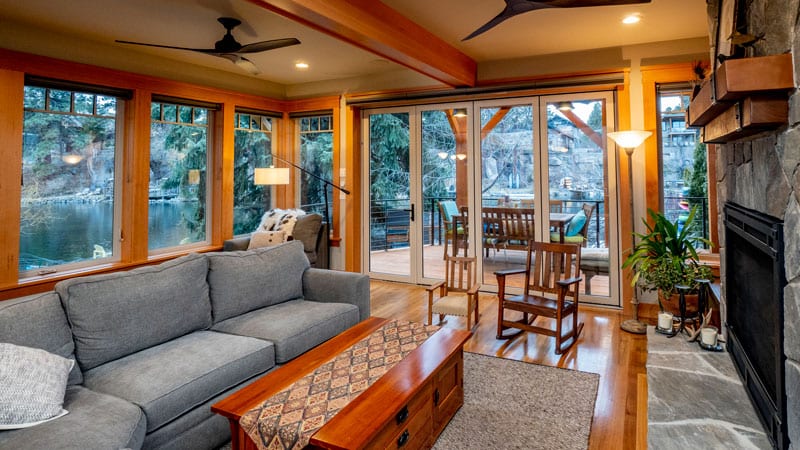 The Bowermans’ personal touch and stories permeate the remodel. The window, door, baseboard and box-beam trim came from reclaimed fir bleacher boards which Jayson found in Seattle and hauled back to Bend in a trailer during the “snowpocalypse” of 2018. “We spent days scraping miles of bubblegum off the wood,” Edleston said with a laugh. He estimates that they plugged about 1,500 bolt holes, but the result is trim that “looks historic and will age beautifully.”

The couple retained the original front door, including its skeleton key lock. And instead of ripping out the old fir floors, they stripped the fir and chose a compatible narrow-plank white oak for the new section. 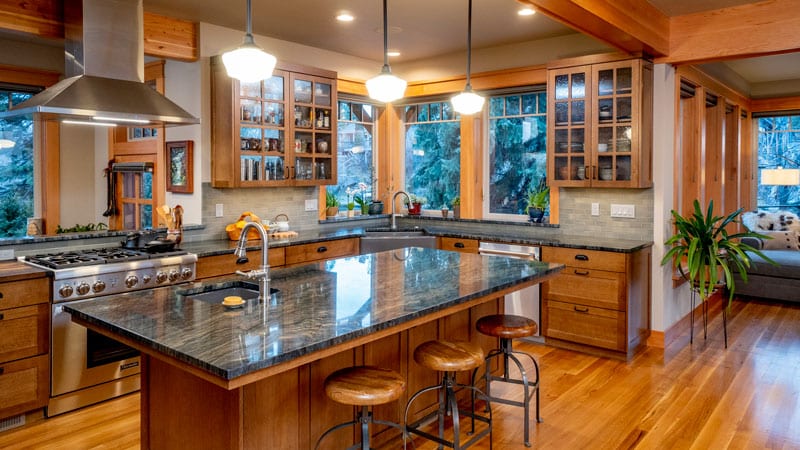 “Those guys have really good taste,” Edleston said. The family searched out vintage fixtures for the old house, including a cast-iron enamel laundry sink from the historic Dalles Hotel, and rejuvenated the plaster walls with age-appropriate push button light switches.

The couple built the fireplace mantel and kitchen pantry shelving from a windfall maple salvaged from the farm of Bill and Barbara Bowerman, Jayson’s grandparents. The two decks are wide-plank Port Orford Cedar, a durable Oregon timber that Jayson says never splinters and remains soft to bare feet.

With the help of interior designer Kelly Warner, the couple chose slabs of quartzite that mimic the river. Edleston said it’s “the most beautiful quartzite I’ve seen in my life.” The kitchen also has a unique window cabinet through which the outside shines through.

The couple is grateful to its team of designers and builders who persisted through various challenges. “We have an addition that is both beautiful and functional while meeting our design goal of being a modern home which received its architectural bloodlines very clearly from the old mill house,” Jayson said.

In late 2019, the Bowerman family, which now includes their second child, moved into the home. They look forward to daily canoe paddles with their two young boys. And anyone who knows Jayson suspects it won’t be long before his kids are riding the waves with him. 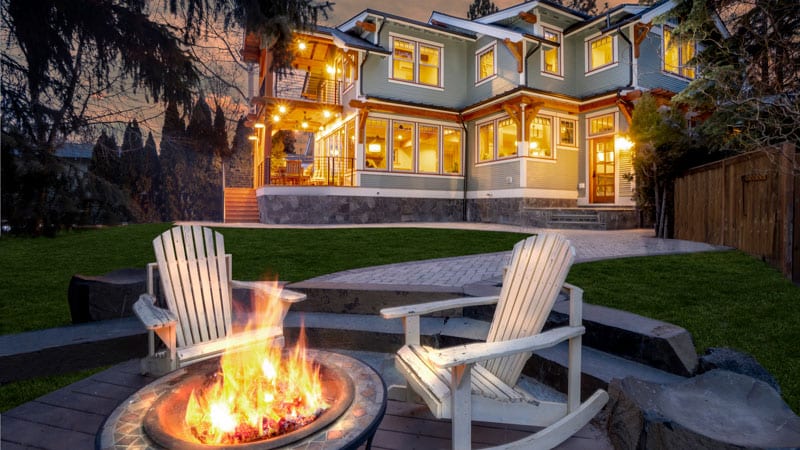