Bend’s Alice Drobna has rewritten the ultra-endurance record book—and she’s not done yet. 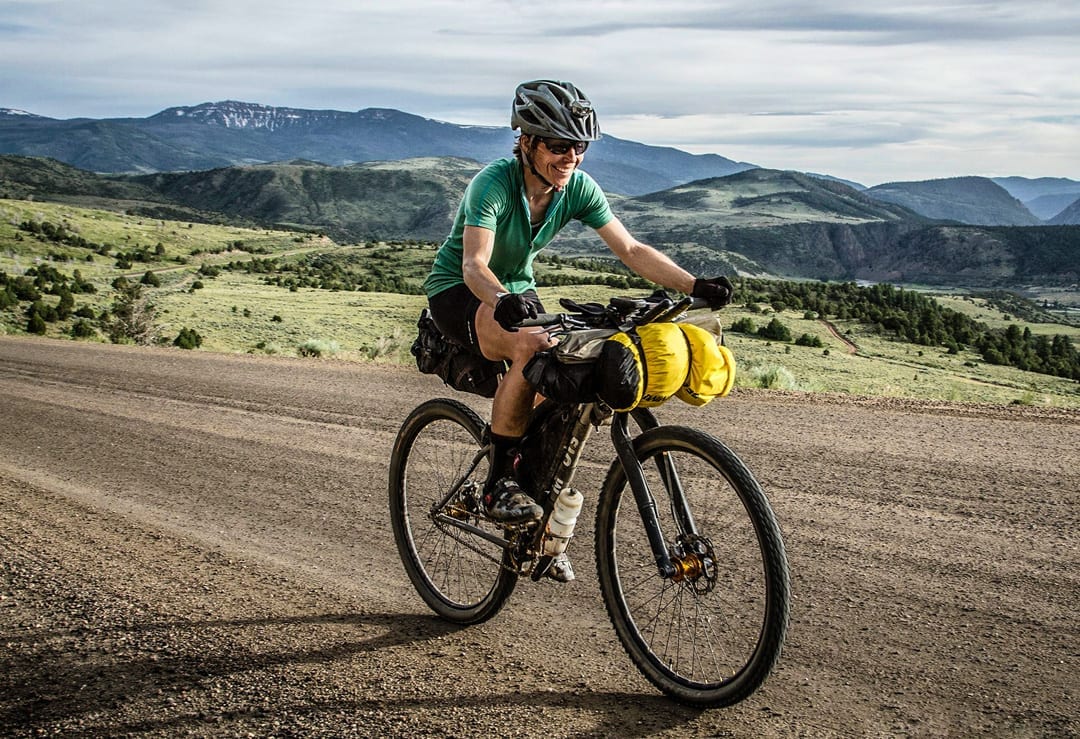 Alice Drobna, an understated 43-year-old graphic designer for Hydro Flask, is arguably the nation’s toughest long-distance mountain biker. She is certainly the most dedicated. After completing five 100-mile mountain bike races in 2013, she still wanted more. As in, more miles, more solitude and more challenge. Drobna is the first—and still only—woman to complete the trifecta of ultra-endurance mountain biking, known as the Triple Crown Challenge of bikepacking. She’s also the only mountain biker, man or woman, to do so on a singlespeed.

To claim this rare distinction, riders must finish all three of the sport’s classic dirt events, the Arizona Trail, Tour Divide and Colorado Trail, in the same season. This is a Herculean challenge in terms of total time in the saddle as well as the short recovery time between races.

The 750-mile Arizona Trail takes place in April; the Tour Divide, which spans 2,745 miles from Alberta to New Mexico, begins in June. Approximately three weeks after finishing the Tour Divide, would-be Challenge finishers must complete an arduous 500-mile journey gaining 70,000 feet through the Rockies from Durango to Denver.

Drobna’s record-setting time set in 2015 still stands at thirty-six days, six hours and fifty-six minutes, in which she rode 4,080 miles and logged 380,000 feet of climbing. (That’s about 10,500 feet of elevation gain per day, or riding from Bend to Mount Bachelor three-and-a-half times). She joined nine men on the list of cyclists who have accomplished this brutal feat.

Born in what was then Czechoslovakia, Drobna came to the United States in the early 1990s to attend college. She stayed, gained citizenship and bounced around the country before landing in Park City, Utah. There she met Ross Windsor, her longtime boyfriend (and three-time U.S. trials bike champion) who in 2008 introduced her to mountain biking on a single-geared bike.

“Riding singlespeed just made perfect sense to me,” she said. “It was quiet and light, and I got strong really quick.”

Her mountain bike racing career began with cross-country and then marathon distances, and she won a national title in 2011. She followed that up by completing five 100-mile mountain bike races in 2013. Still, Drobna wanted a steeper challenge. 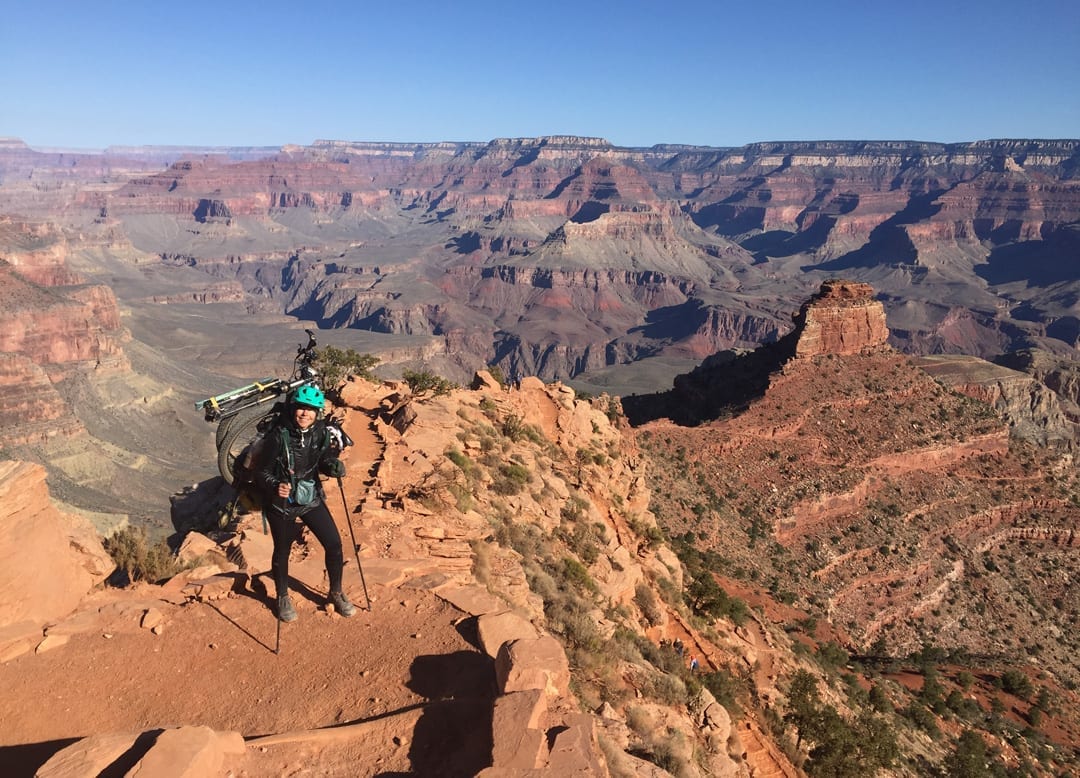 Drobna a few hundred feet below the South Rim in Grand Canyon on the Arizona Trail Race in 2018.

“I found that I felt more at peace going slower and farther,” she reflected. “What I really like is being all by myself. For some reason, I was still searching for something longer. That’s when I started researching the Tour Divide. I thought, ‘If I can ride 100 miles, why not try to ride 100 miles every day?’”

Competitive bikepackers race alone and unsupported. They carry a GPS device to navigate the route, and to keep all competitors honest, along with their own food, water, tools and gear for camping. It’s this self-reliance and solitude that attracts Drobna to these extreme events. That, and the simplicity of it.

“You can go days without seeing any people,” she explained. “It’s like you almost live a different life. You leave everything you do at home behind—responsibilities, relationships, work. It’s just you and the trail and the bike. You’re in the moment all the time.”

In bikepacking events, Drobna’s custom-built titanium singlespeed—carrying food, water and gear—weighs in at forty pounds. She typically pedals sixteen to seventeen hours each day, including a few hours in the dark. Depending on the trail, she might cover 170 miles during that time. If the route is particularly steep or technical, or requires more hiking, she might log only eighty—all the while burning 10,000 to 12,000 calories.

Since her record-setting season in 2015, Drobna continues to enter long-distance bikepacking events but with less frequency. Despite vowing not to, she’s been back to the Arizona Trail twice, with the aim of besting her 2015 record time. This past April, she won the female division again, but failed to beat her record-setting time.

Of all the racing she’s done, Drobna describes the Arizona Trail ride, which stretches from the Arizona-Mexico border to the Utah state line, as the “most brutal.” Part of the difficulty is the twenty-four-mile portage across the Grand Canyon, which requires riders to disassemble their bike, affix it to a pack, and trek down and then back up the canyon wall.

That, and the weather. “There’s no shade, and there’s constant sun beating down on you,” she recounted of the 2018 race. “I was having a hard time staying hydrated. I was drinking seven liters a day [more than three-and-a-half gallons], and it wasn’t enough. When I climbed out of the heat into Flagstaff, the coldest night was fifteen degrees with fifty mile per hour winds. I was worried about being hypothermic. It was incredibly brutal conditions, from one extreme to the next.”

Despite this, Drobna now holds the two fastest finish times among women.

“One of the things that draws me to [ultra-endurance cycling] is it’s never the same,” she explained. “One time I ran into three bears in two days, I almost hit a moose during a night ride, almost kicked a rattlesnake with my pedal. You just never know what’s going to happen, and that’s exciting to me.”

For the remainder of this year, Drobna is taking a break from racing, but hasn’t written off resuming her ultra-endurance career. “It’s crazy hard,” she said, which seems like a gross understatement. And then added: “But you can’t get mad when you’re out there, because you’re in the most beautiful place.”