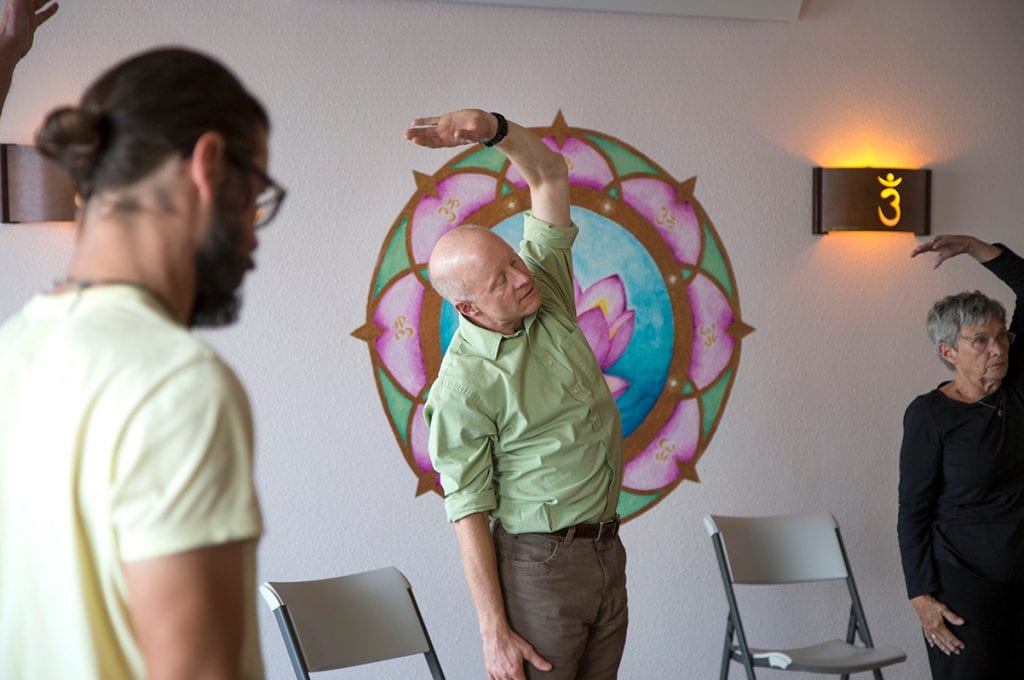 Standing in a relaxed, yet tall stance, eight people raise their arms to shoulder height, graceful and ethereal as long-legged, long-necked cranes. As if moving through honey, striving for quality of movement, they take unforced, diagonal steps, shifting their weight, back to front. In a ponderous, powerful, plié of sorts, they take on the wide stance of the bear, heavy, with hidden agility. Traversing the room like playful monkeys, they extend upturned palms from under their chins, as if offering fruit.

In this qigong class, a dozen students, ranging in age from 20s to 60s, follow the lead of instructor Mark Montgomery. He founded Bend Community Healing in 2014, which now operates out of a small office/healing center off Century Drive on Bend’s west side. He offers meditation classes and acupuncture, community-style, in which a group receives the treatment simultaneously, provided on a sliding scale. Each person pays what they can, $20 to $50, no questions asked, and a $15 intake fee at the first visit.

Montgomery, who has studied with master acupuncturists and qigong instructors throughout the U.S. and in China, has long supported the community acupuncture model, believing that it doesn’t have to be expensive. In a stressful, conflict-filled world, we need spaces where strangers can turn off their phones and rest side-by-side, healing together in comfy recliners in a large room, amid soft, therapeutic background music. Community itself is a potent healing force, he said, and the way to popularize acupuncture’s effectiveness—from calming the mind to helping treat injury and disease—is to make it readily available.

Healing, energy-enhancing, calming practices such as meditation and qigong are free and easy to learn, Montgomery said. Qigong (pronounced chee gung) combines the Chinese words qi (life force or vital energy) and gong (cultivation or skill). The gentle movements, breathing techniques, and mental concentration are aimed at circulating, strengthening and purifying the qi.

“What’s frustrating for me is that most of the people who come in have things going on that are the result of never having been taught to tune in to, and feel and tend to their own energy, and for me, living in the 21st century, it is a non-negotiable,” said Montgomery. “We have to learn to bring our awareness of ourselves in the world into alignment… There’s a way that we can actually tune in and feel not just structure, but energy, and the more we can hone awareness, that ability to attune, the more we can start to take care of ourselves in a much more profound way.”

Ryan Redmond said he joined the qigong class six months ago to build on his experience in a similar practice, tai chi. Qigong has taught him how to stay in tune with his mental and physical energy in a distracting world. The 41-year-old said he respects Montgomery’s commitment to his clients, the sliding scale and welcoming space, in which clients share not just “rainbows and unicorns” but also their struggles. “People in class are experiencing genuine community,” he said.

Sophie Bijjani and Florian Pappafava discovered Bend Community Healing while visiting from Quebec and considering moving to Bend. Bijjani, 25, said she appreciated the time at the beginning of the qigong class for people to tap into their feelings and to focus on an intention throughout.

“It quiets the mind and gives an opportunity to focus on your body, and not just on what you have to do, what’s next, what’s best for your career or your kids,” she said.

Pappafava, 32, said, the class creates an inviting space for exploring your own energy. “I get something through living the movement rather than just doing it mechanically; it was nourishing to think and just live the movement. You are present.”