You are here: Home / Culture / Community / Catch the “Songs for a New World” musical in Bend 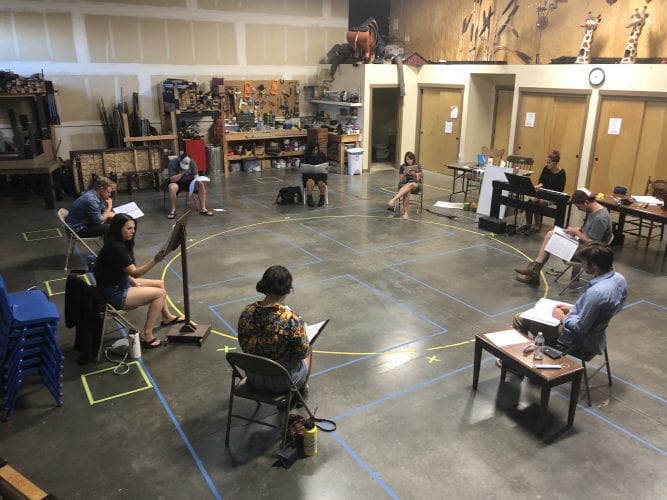 During a time when many theater productions have been stalled or cancelled, Bend’s Musical Impressions Studios has taken a unique approach that’s allowed the production of a musical with a local cast of performers. This will give the community a unique opportunity to enjoy not only one, but two performances.

Musical Impressions Studios is presenting a social distancing drive-in musical at 7:30 p.m. Friday, August 14. The musical, “Songs for a New World” will be performed live and on a stage in the parking lot at New Hope Church in Bend. This will be Bend’s first drive-in theater performance of its kind since the COVID-19 pandemic began impacting the area. Another showing will be followed on August 21 at the Les Schwab Amphitheater. 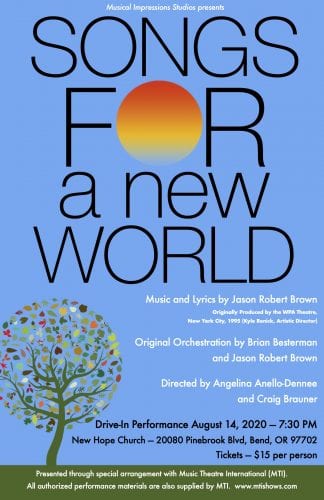 Co-director Craig Brauner notes the production will be the first theatrical performance on the stage at Les Schwab.

“We are ecstatic that our cast and team of local talent will have the opportunity to grace this landmark stage in our community with this special show,” Brauner said.

“Songs for a New World” is a musical written and composed by Jason Robert Brown, and there are no set characters, narratives or even an overall plot. SInce there is not a lot of dialogue in the musical, the songs and incorporated dances make up and tell the story.

The arts, as many theatre performers believe, have the powerful ability to connect and heal people. Brauner and co-director Angelina Anello-Dennee picked “Songs for a New World” because of its message of hope and its theme of connection in a time of disconnection.

“We recognize that our world and local community is in a time of unprecedented change and defining moment after defining moment. As creators and passionate community members, we believe a message of hope in the form of theatrical entertainment is worth gifting to our community,” Anello-Dennee and Brauner said.

When it comes to rehearsing before the big night, there have been many differences that have challenged the production of the musical. Actors and the creative team must wear masks, sanitize their hands before rehearsals and can only take off their masks if singing. A chair and microphone are given to each actor for only them to use, and the cast members keep six feet apart.

The biggest challenge for the team has come down to following social distancing guidelines. Brauner said theatre is intimate in that lovers typically physically embrace, and dance and other forms of contact take place.

“Whenever I find myself stuck, I refer to Jason Robert Brown’s advice to directors staging the show, saying it is ‘most powerful when the audience can feel and see those journeys take place,’” Brauner said. Both directors were shocked with how adding in the social distancing guidelines strengthened and deepened the story. Brauner credits the musical performers for bringing in that change.

Anello-Dennee and Brauner said that they are fortunate to have the opportunity to stage a production during COVID-19, while also getting the chance to show their appreciation through the musical for anyone that has supported them. The duo said they recognize that many artists and creators do not have this chance and are struggling with unemployment, not knowing if or when they will work again.

“With this in mind, the cast and creative team politely ask that those who love and support the arts continue doing so by supporting community artists, like us, and to consider a donation of any amount to the following artistic support funds: Oregon Cultural Trust, The Actors Fund and Americans for the Arts,” Brauner said.

Audience members planning to attend the drive-in show will be guided in their car to a parking spot when they arrive. They have the choice when the show starts on whether to roll down the windows or to listen to the show on the radio.The audience can bring lawn chairs but must follow social distancing guidelines.

For more information and to purchase tickets, click here.