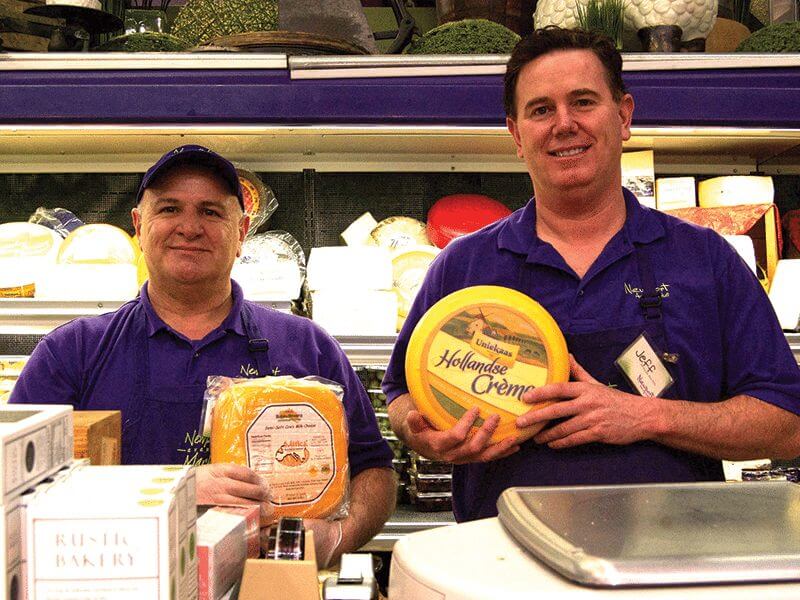 Love Great Cheese, but don’t know how to shop for it? Meet Jeff Holden, Newport Avenue Market’s resident cheese expert of eight years. Jeff knows cheese like a brewer knows beer. Most days you’ll find him guiding customers through the market’s many offerings. The cheese case is brimming with nearly two hundred types of fermented goodness from the best creameries around Oregon, the nation and the globe.

“If you don’t know about cheese, it can look intimidating,” Holden said. “It’s like a wine list, so we let customers try lots of samples because every person likes different things.”

Among other things, Holden can suggest some top seasonal varieties. Cheese crafted from the milk of cows fed on summer’s fresh grass and flowers exudes earthy, straight-from-the-farm flavor.

“My favorite cheeses in summertime revolve around the fresh Oregon produce we start seeing. I really like Burrata and Bufala mozzarella for caprese salads,” said Holden. “Oregon-made Rogue River blues are also great on any salad.”

This summer, the market’s cheese team plans to attend several national food shows and take a road trip to small dairies across Oregon where it will source artisan, hard-to-find cheeses. Next time you’re on Newport Avenue and in need of last-minute foodstuff for a party, stop in and ask Jeff to introduce your palate to a few bite-size samples. –Mary Hinds

Fifteen percent of all cheese at Newport Avenue Market hails from the Northwest. The offerings include these three Oregon curds.

Rogue River Blue
Rogue Creamery, Central Point
Made from raw cow’s milk and wrapped in pear brandy-soaked grape leaves, this creamy cheese was recently voted one of the top sixteen cheeses in the world in all varieties.