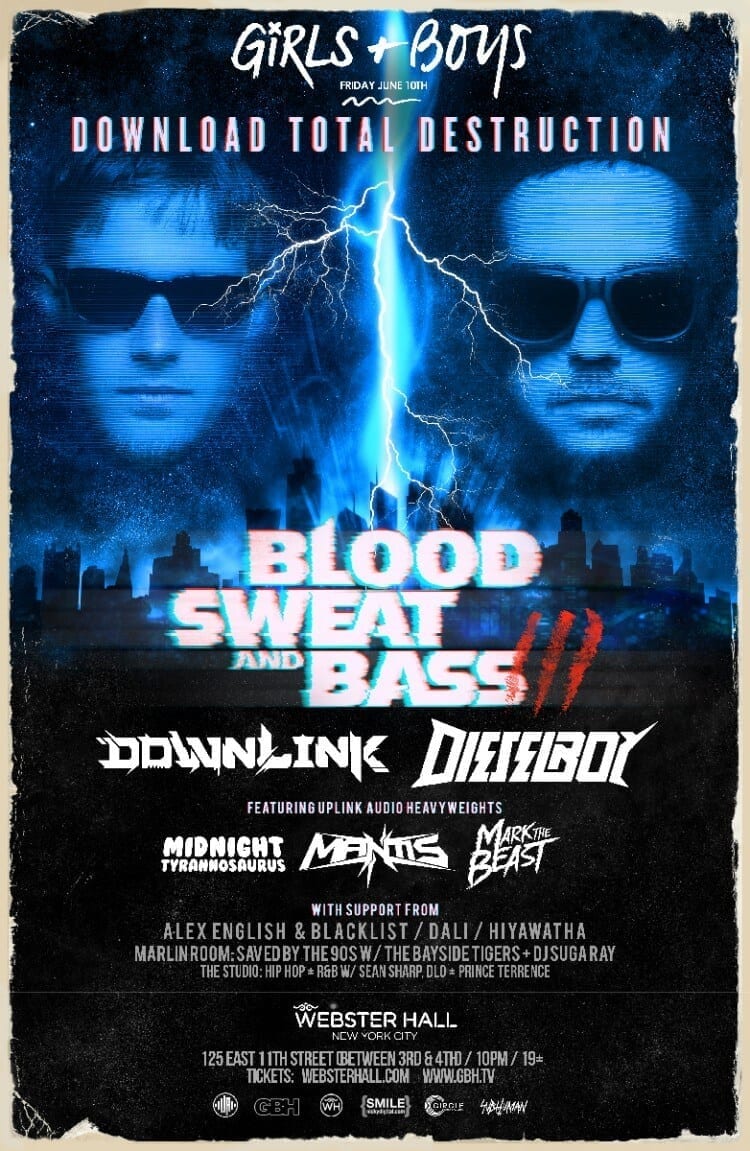 Diesel Boy – At a time when headline “DJs” shamelessly play pre-programmed – even pre-recorded – sets and the masses mindlessly embrace the charade, Dieselboy – The Destroyer – stands out as a rare virtuoso of the art and craft of live DJing. His complex, high voltage, take-no-prisoners sets have created legions of loyal die-hard fans around the world. Arguably no other DJ mixes live – on four decks – with more precision, imagination, intensity, energy and finesse.

In the history of electronic dance music, no one comes even close to matching his legacy of epic dramatic mixes, each a timeless star in his signature constellation. Dieselboy – one of the world’s finest technical DJs –  has, in fact, elevated the themed DJ mix to the realm of fine art.

For over two decades one of the world’s most influential ambassadors of drum and bass, Dieselboy (Damian Higgins) is America’s most iconic underground bass music curator and pioneer.

Dieselboy is also a passionate connoisseur of books, film and food. He has written about and been interviewed about his obsession with food, and since 2014 his cooking skills have been displayed in professional kitchens around the world including pop-up hamburger events at restaurants in the Netherlands. He has collaborated on an artisan beer and a gourmet hot dog, and has a cocktail published in Robert Simonson’s (New York Times cocktail writer) new book “The Old-Fashioned.”

Dieselboy was the first drum and bass artist to chart a single on Billboard’s dance chart with “Invid” in 2000, and was the first American voted into the UK-based Drum & Bass Arena Top 10 DJs online poll in 2004. He’s been featured on magazine covers, interviewed for documentaries, TV and radio, heard on MTV, ESPN and action/adventure video games, and sponsored by DC Shoes and Pioneer Pro DJ.

In 2002 Dieselboy founded Human Imprint, North America’s most prolific, dynamic and innovative drum and bass label, and is co-founder of SubHuman (dubstep, electro, trap), under the umbrella of Planet Human. Planet Human is beloved by its fans for the quality of its next level high energy releases by international vanguard artists including Bare (US), Mark Instinct (Canada), Mayhem (US), Muffler (Finland), Nerd Rage (US), Nightwalker (UK), NumberNin6 (US), Pixel Fist (UK), Subshock (Spain), Zardonic (Venezuela), and Faces of Def (Dieselboy’s collaboration with Mark the Beast).

Dieselboy’s DJ career began in northwest Pennsylvania DJing high school dances. While a student at the University of Pittsburgh he learned to beat-match vinyl live on college radio and played trance, happy hardcore and breaks at house parties. His 1994 mixtape “The Future Sound of Hardcore” led to out of town bookings and his expanding popularity and technical skills led to the honor of being the first American asked by a British drum and bass label to mix a compilation (“Drum & Bass Selection USA,” 1996).

In 1997 Dieselboy moved to Philadelphia to be drum and bass buyer and T-shirt designer for seminal rave culture/record store 611. In 1998 Dieselboy was the first American drum and bass DJ to be nominated for Best Drum & Bass DJ at the Global DJ Mix Awards and tied with LTJ Bukem. From 1998 to 2004 Dieselboy hosted North America’s premier drum and bass weekly “Platinum” at club Fluid.

Dieselboy continuously raises the bar for the DJ mix as an art form, and each of his from 1992 to his latest tour de force “Dieselboy – The Destroyer” stands the test of time. State of the art showcases of producers and graphic artists of each respective musical era, Dieselboy’s mixes have been described as “cinematic” and “intoxicating.”

Dieselboy’s goal in creating each mix is “to make the most intricate, layered, nuanced, amazing drum and bass mix ever done. Period.” His sixth sense for sublime exquisite blends – “the sound of heaven crashing into hell,” as he once described it – is as transcendent as it is legendary.

In his dramatic intros (a Dieselboy trademark) his narrators [;;who include movie trailer voice legend Don LaFontaine, Peter Cullen (“The Transformers”‘ Optimus Prime), Lynanne Zager (“Lost,” “Fantastic Four”), and Corey Burton (Disney) describe epic – from sci-fi fantasy to post-apocalyptic to grindhouse scenarios. (His intro to “Wake the Dead” is a thinly veiled reference to the death of the art of DJing – a theme that resonates amongst fellow technically skilled DJs, fans and dance music aficionados.)

An inspiration for generations of DJs, Dieselboy’s longevity and relevance in a mercurial industry is a tribute to his relentless drive to create “amazing” experiences for his fans in their iPods and at his infamously explosive live shows.

Dieselboy fans praise his skills as “genius.” Says The Destroyer:  “I don’t fuck around.

Downlink – A name firmly cemented in the hearts and minds of the bass music community. This native of Western Canada is respected the world over as a producer of the highest quality dance floor bangers. He has had numerous #1 hits on Beatport and continues to crush the charts time and time again. His abili
ty to craft uniquely awesome bass sounds and his versatile composition skills have made him stand out, driving his career in exciting new directions. Whether its mixing records for bands like Korn, shredding as an alien bass lord in side project Destroid, or working on new material for Downlink, this tireless producer is always cooking up something heavy. For over 5 years now he has been touring the planet, leaving a wake of awe-struck audiences in his path. To see him live is to witness one of the tightest technical DJ’s in the game. His 4 deck live mixing and infectious stage energy light up venues turning crowds on their heads time after time. Expect lightning fast mixing on a journey through a wide variety of bass music. All tempos are fair game but prepare for underground vibes and dirty bass.  Downlink is not one to be pigeon-holed and is constantly on a quest to evolve and refine his sound. With this in mind, one thing will always remain constant – a pure, unadulterated, heavy listening experience…

No refunds. If you can not attended the concert you may sell your ticket it transfer it to a friend.