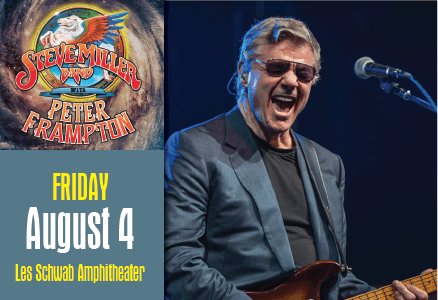 One of rock music’s all-time greats, the Steve Miller Band has sold more than 30 million records in a career spanning more than 40 years. Their trademark blues-rock sound made them key artists in classic rock radio.

Peter Frampton remains one of the most celebrated artists and guitarists in rock history. His fifth solo album, the electrifying ‘Frampton Comes Alive!’, is celebrating its 40th anniversary this year and remains one of the top-selling live records of all time.

Both veteran rockers will be taking the stage for one unforgettable night! Doors open at 5:00 PM, show starts at 6:00 PM.