A quick glance into the riverfront home designed by Karen Smuland Architecture and visitors see a home washed in brilliant light and stunning views of the Deschutes River. The crisp lines of the concrete countertops and the white oak floors are anchored by a growing trend in architecture and design: a large and foldable glass door. Unlike the smaller, two-panel sliding glass doors of the past, these glass doors fold together like an accordion, offering a seamless transition from indoor to outdoor, merging nature with architecture. “Maintaining a connection to the outdoors just makes people happier and healthier,” Smuland said. “And so people really are trying to have that kind of indoor-outdoor connection, regardless of how big their yard is…they want to be able to have that flow.” 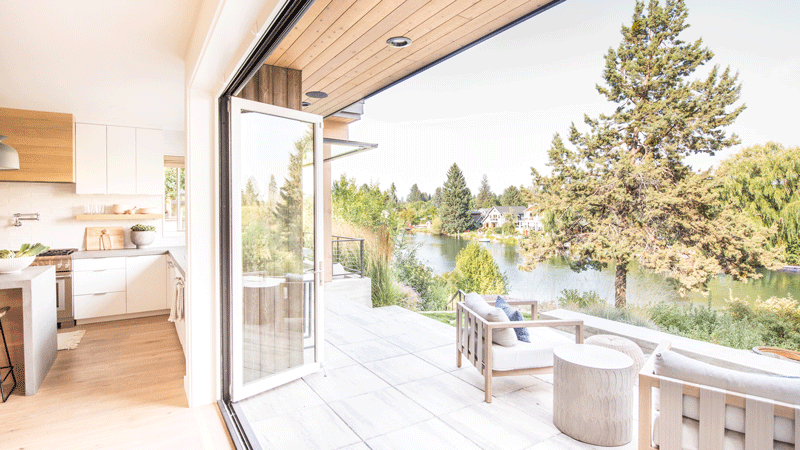 The wide glass door opening of this riverside home beckons guests down to the Deschutes River. The home was designed by Architect Karen Smuland and built by Trevin Duey Construction, with interior design by Harper House. Photo Kayla Mckenzie Photography

A large glass door with a picturesque view of the Cascade Range is also a defining feature of a new Awbrey Butte residence by Brandon Olin Architecture. The opening leaves visitors feeling like they can reach out and touch the mountains. “[Moveable glass doors] have a certain sense of drama,” Olin said, “And just make a real impact on what the house looks like.” According to Smuland, these doors can be well worth the cost with a good view. “If you’re going to have a wall there, you’re going to have windows in it or something,” she said. “It’s more expensive than windows but the benefits really outweigh it, if you have a view.”

During the pandemic, many sought a deeper connection with the outdoors and nature. This is easily seen in the continued interest of implementing plants into home design, and the increasingly popular hiking trails and camping spots around Central Oregon. A connection to nature continues to be a recurring theme in architecture and home design. “Scientists are becoming more aware of the connection to the outdoors, even visually, just makes people more productive, happier, healthier, etc.,” Smuland said. “Lots of office buildings are capitalizing on that, trying to retain workers and make them more productive.” 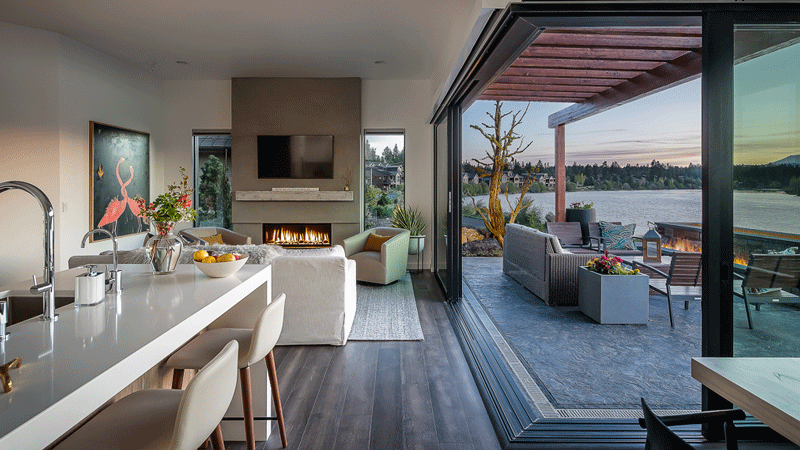 Additionally, access to these doors has also increased. According to Olin, these features used to be produced only by some of the highest priced window and door manufacturers. Now, they’re built by more manufacturers which has made them easier to acquire. At the same time, Olin said, the technology and performance of these features have improved from an energy standpoint which has helped them meet energy codes. “From a pragmatic and a practical standpoint,” he said, “those are probably the two reasons why they’ve become a little bit more commonly used.” 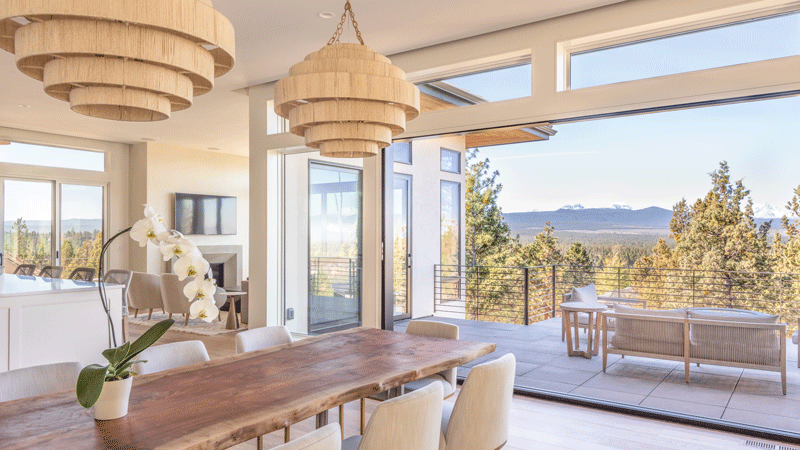 While moveable glass doors can dramatically impact a home’s design, there are a few common concerns as well, namely privacy and environmental factors. The most popular solution to the issue of privacy is to mount rolling shades above the doors. Duey mentioned that every home they’ve built with a moveable glass door has included these shades. Olin said they try to address the issue of privacy through the design as a whole, and how they orient the outdoor spaces and landscaping. Often, the glass doors will face a more private courtyard or patio, rather than opening in full view of the public—but, homeowners may need to be comfortable sacrificing some privacy for stunning views. Other lesser concerns include bugs entering a house or a gust of wind knocking something over inside, both issues that optional screens can help address.

For those with the means and desire for these glass features, it can be the perfect way to fuse a home with the outdoors. “They’re stunning,” Olin said.