You are here: Home / Home / Deserving Homeowners Settle Into a West Side Bend Habitat for Humanity Home

In the best of circumstances, the road to homeownership can be complex, and the day the keys are finally handed over can be life changing. In more challenging circumstances, it’s hard to put into words what it means. “It’s night and day,” said Eryn Sisson, who moved into her new home on Bend’s west side in late July. “We feel safe and sound and secure and spoiled.” Sisson and her son Paxton are the proud new owners of a two-bedroom, two-bath home in northwest Bend, in a mini neighborhood full of other new homeowners. The single mother and her son are just some of the faces of the latest Bend-Redmond Habitat for Humanity development, an eleven-home neighborhood off Northwest Juniper Street. For Sisson, the opportunity to buy a home through Habitat for Humanity couldn’t have come at a better time. 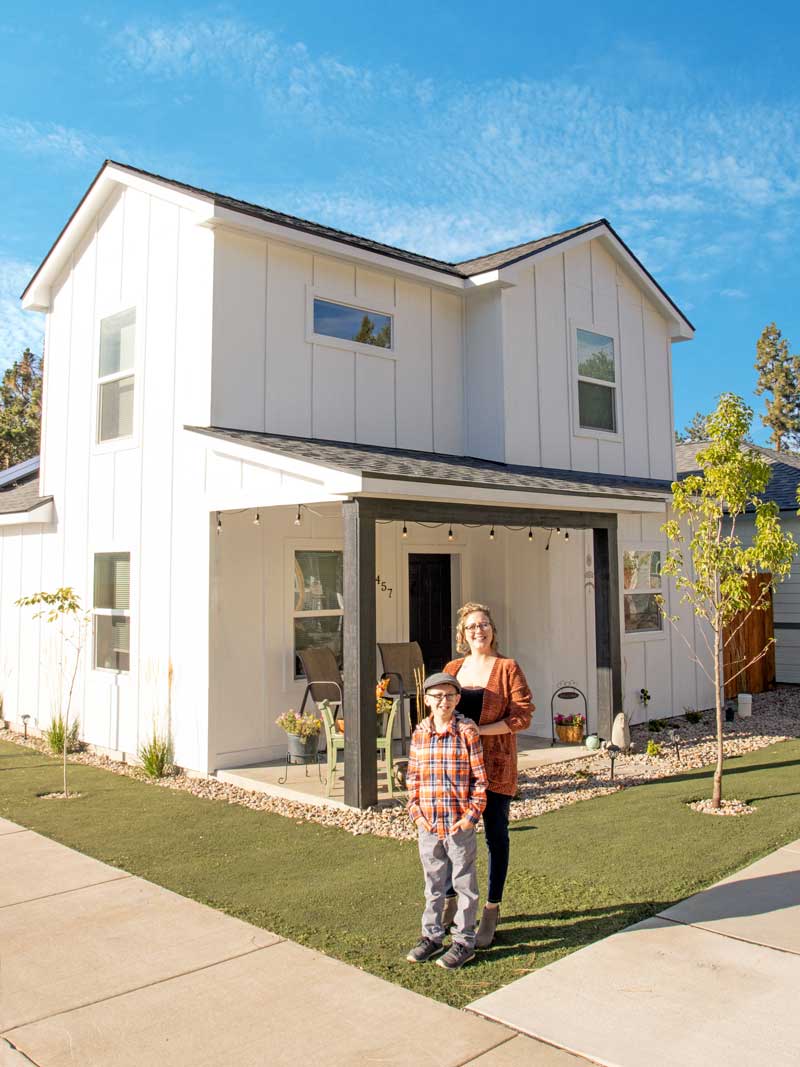 Sisson and now 11-year-old Paxton learned in March 2020, just a couple of weeks before the pandemic set in, that their northeast Bend rental was under foreclosure. They’d paid the rent each month, but the owner hadn’t kept up with the mortgage, and the bank was ready to step in. While Sisson scrambled to find another rental, a friend reminded her of Habitat for Humanity. She’d applied in the past, but never had quite the right qualifications to move forward. In order to pursue homeownership with Habitat for Humanity, applicants must fall into a specific income range, making more than what would qualify them for any public assistance, but less than seventy-five percent of the area’s median income when applying. Applicants must also have a solid credit score, have a steady work history, agree to 150 hours of volunteer work and help pay closing costs. Once they move in, they’re expected to pay a mortgage that matches thirty-three percent of their income at the time they enter the program. “It’s a massive commitment,” Sisson said. “And meant for people who are living way below their means.” Sisson has spent the past seven years as a paralegal, and with a steady work history and just the right circumstances, this time she was approved. 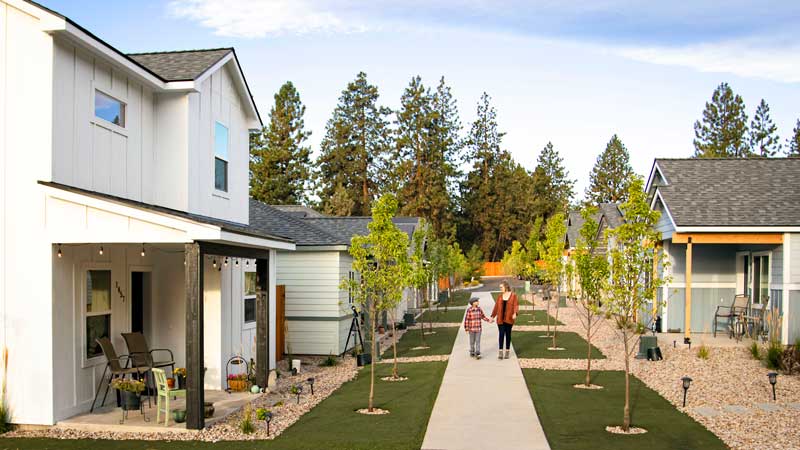 The next eighteen months were kind of a blur. Sisson and her son spent time volunteering at the ReStore, Habitat for Humanity’s secondhand store for home goods and tools. When construction started on their future home, they also pitched in on Saturdays, helping to literally raise the walls of the residence. Sisson learned about homeownership and budgeting through online classes and Zoom meetings organized by Habitat. In the meantime, Sisson continued her full-time job and Paxton stayed busy with remote schooling while the two lived in a temporary rental.

Eventually, near the end of the process, Sisson and her son visited a park in Bend where they were introduced to many of their future neighbors. Many have shared stories of overcoming hardships, but together Sisson envisions they’ll become a tight-knit group of neighbors who support each other and recognize how significant the opportunity of homeownership is for them. “I can’t even explain it, we are so grateful,” she said. “And we deserve this, and I think every family in the neighborhood deserves this.”

In Central Oregon, Sisson and her son are one of many families struggling with the region’s lack of affordable housing, according to Robin Cooper Engle, vice president of resource development for Bend-Redmond Habitat for Humanity. The local organization, which is affiliated with the greater Habitat for Humanity but operated and funded independently, tries to plan a few years ahead on inventory of homes, but even with dozens of homes in the pipeline, the need is far greater, Cooper Engle said. “There are a lot more applicants than we can serve,” she said. Habitat works with local cities, foundations, businesses and private donors to raise money for land and construction, and generates money from the ReStore, but the organization is always seeking more funds to keep up with demand. In the case of the west Bend development, the undeveloped land was donated to the organization, and Habitat will own and lease the land to the new homeowners, with an agreement that if the homeowners wish to sell, they must sell back to Habitat to ensure the home ends up in the hands of another applicant. “It’s just really about serving people with housing,” Cooper Engle said.

Cooper Engle and her daughter Carly went through the Habitat program themselves eleven years ago, when Cooper Engle was a single mother and Carly was three years old. The experience gives Cooper Engle a unique perspective and deep appreciation for the organization she works for. “Giving people an opportunity for homeownership is so transformational,” she said. 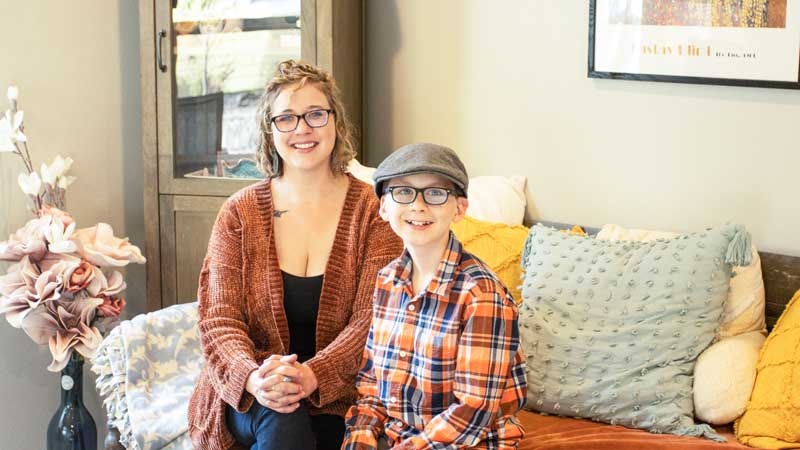 Sisson and Paxton moved into their new two-story home in late July. It’s 1,200 square feet (including a garage) and is just the right amount of space for the duo. Paxton, a sixth-grader at Pacific Crest Middle School, settled into the downstairs bedroom, and his mom moved in upstairs, taking advantage of a small walk-in closet and her own upstairs bathroom with a tub. The home has white cabinetry, light finishes and neutral walls, allowing Sisson to customize the space and add her own pops of color, which she quickly started doing late this summer. Just before they moved in, the home was staged with furniture from the ReStore for showings as part of the Central Oregon Builders Association Tour of Homes. When the family of two began moving in, they were gifted a beautiful coral couch from the staging, and Sisson designed the rest of the living room around it. It’s a comfortable sitting piece that’s well enjoyed by the family’s two cats—one-year-old Watson, and Pua, who was adopted this summer. 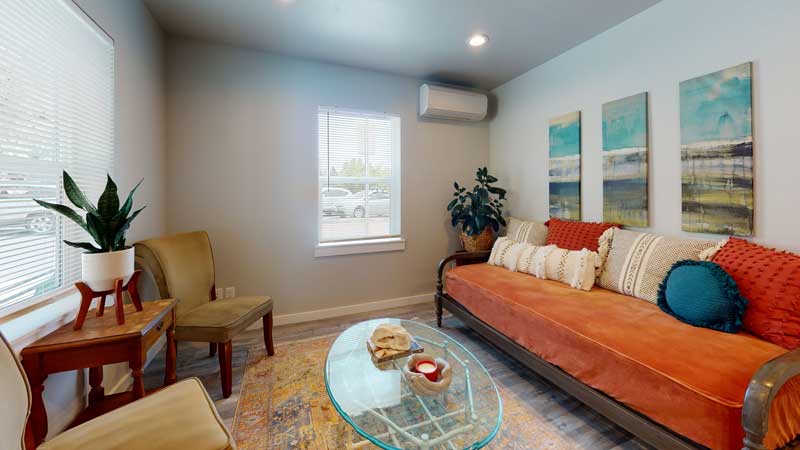 While the family was still settling in this September, Sisson was quick to share what they’re enjoying about the home so far. “It’s bright, and it’s happy and it’s everything we ever wanted or needed,” she said. Together, she and Paxton love cooking—they’ve recently been making Asian dumplings—and Paxton is planning a tinkering space in the garage to work on projects. Paxton loves spending time outside the home, on his pogo stick, playing basketball or biking around. Sisson also just got a bike, a pink cruiser, which will be great for transportation around town. “I haven’t used my vehicle hardly at all since I’ve been here,” Sisson said. “We’ve just been walking everywhere.”

Finally moved in and able to reflect on their journey over the past year and a half, Sisson gets teary eyed thinking about how much has changed, and what their future looks like in their new home. “We’re going to build our life here—and we get to figure out what that looks like, inside these walls.”

In July, the home was on display as part of the Central Oregon Builders Association Tour of Homes. It earned the tour’s Green Building award for homes valued at less than $500,000 and was awarded best feature for homes valued between $380,000 and $400,000 for being a net zero residence. The home is outfitted with solar panels and energy-efficient heating and cooling.