You are here: Home / Culture / Just Say No: A local effort aims to take a bite out of the global plastics problem

Photographer Brown Cannon’s travels have taken him around the globe. He’s photographed big wave surfers on Hawaii’s north shore and snapped images of whales near the South Pole. 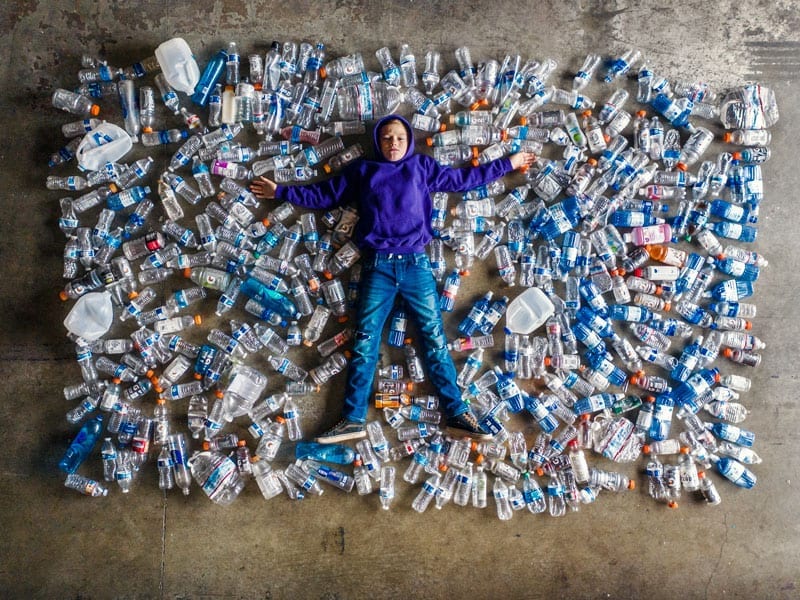 He’s brought back stunning images from faraway places. His work has helped expose him and his audience to the wonders of the world, but it’s also revealed something dark and deeply troubling. Our world is being choked by a plastic pollution epidemic that is poisoning our seas and sullying landscapes. Rather than standby and watch the problem continue to grow, Cannon decided to do something about it.

Last year, he challenged his friends and social media followers to take a no-plastics pledge. No plastic straws, no plastic cutlery, no plastic bottles. He offered to give away a print of one of his photos in a random drawing to incentivize participation.  He wasn’t sure how the idea would be received. The response was immediate. More than two hundred people signed on. Rather than stop there, Cannon decided to see how far he could take the idea. Over the past year, he has formed a non-profit and built a website to support a student-led campaign to reduce the use of plastics in schools.

He rolled out the No2Plastic campaign at the start of the school year in Bend and Denver. With student ambassadors pushing the program, almost 500 students have taken the No2 Plastic pledge. Participants agree to avoid using plastic straws, bottles and cutlery, or any combination of the three. Each pledge is immediately factored into a formula that calculates how much plastic waste is being saved from landfills and landscapes. As of October 1, students from nineteen schools had signed on to the program, with an estimated one million pieces of plastic waste saved.

“We are trying to get people to change a habit or two and see if that translates to deeper action,” said Cannon, in a recent interview.

In this case, he believes that it’s critical to mobilize a young generation of activists and consumers who are willing to change their behavior and are open to the idea that individual actions can have global consequences. He recently rallied students in the Bend High Environmental Club through a teacher connection. Freshly motivated from the climate action walkouts, students were quick to take up the cause.

“We see a lot of plastic in the kitchen and cafeteria, but meeting with Brown really showed us that we have a lot of plastic waste coming out of our school and personalized it a bit,” said Sydney Dedrick, a junior at Bend High.

Sydney and two other classmates GG Johnson and Kira Gilbert spearheaded the sign-up effort at Bend High where nearly 150 students have taken the pledge.

Even as more students get on board with the pledge, Brown said he is looking to expand the campaign by enlisting support from businesses and creating a resource hub on the No2Plastics website where individuals and companies can go to learn about plastic pollution and alternatives to reduce their contribution to the problem. Also, on tap is an aggressive recruitment of artists and ambassadors who can spread the message, helping to educate consumers.

“We want to approach this from an artist’s standpoint, creating beautiful imagery, films and videos that help tell this story and get people connected,” Cannon said.

He believes that the world can tackle plastics the same way that it got a handle on smoking—not by banning cigarettes, but by educating the public on the consequences of not changing our behavior.

“How did we get America to stop smoking? That was driven by those impassioned, emotionally charged campaigns. I think that stuff really resonated with people,” he said.

Share This Article
« Seed to Table: A nonprofit farm feeds the community in more ways than one
Float On: Embracing the art of nothing at Easy Float Bend »