Midway through 1955, polio vaccines finally made their way to Central Oregon, American military advisors began training troops in “Viet Nam,” the Confederated Tribes of Warm Springs commemorated the 100th anniversary of their treaty with the U.S. Government, and a windstorm just before July 4 swept through Bend and wrecked the Mirror Pond arch, the anchor piece to the iconic Water Pageant. 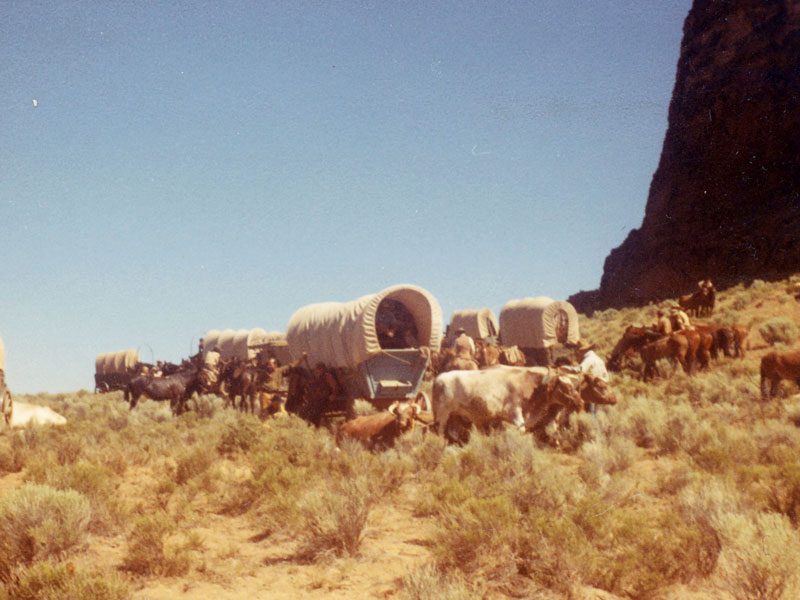 But no event garnered as much attention from the Bend media that summer as Kirk Douglas and his film The Indian Fighter, which was shot throughout Central Oregon.

The high desert had been used in movies before—Marlene Dietrich starred in Golden Earrings, a 1947 World War II spy/romance flick which filmed around the Metolius River—but The Indian Fighter put Central Oregon on the map as a location for big, wide-open spaces that were perfect for Westerns, adventure films and even an Animal House-meets-Porky’s-on-the-water comedy in the mid-1980s. 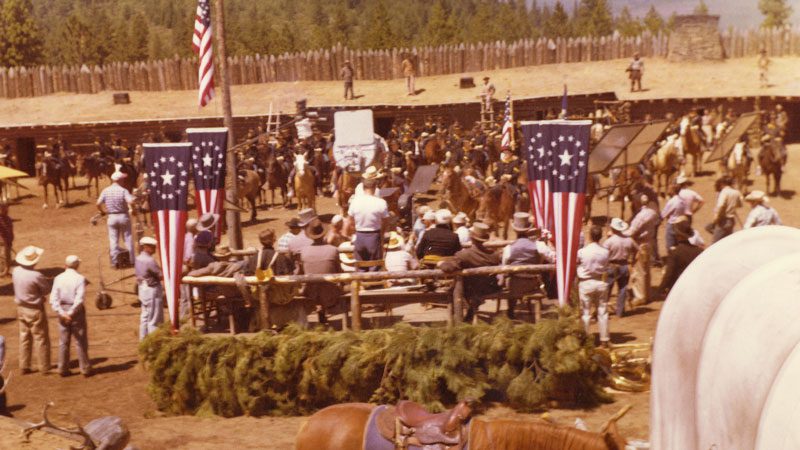 On The Indian Fighter film set with Kirk Douglas, 1955.

“You’ve got to remember, back in the 1940s, ‘50s and ‘60s, we’re still super rural,” said Kelly Cannon-Miller, executive director of the Deschutes Historical Museum, which currently has a cinema exhibit that features The Indian Fighter and other movies filmed in Central Oregon. “We have some nice, lovely landscapes where you don’t have to edit out power lines and a lot of other modern things, and you can still get sweeping vistas of a Western frontier. Film producers still had access to wild places pretty easily.”

Playing a key role in the area’s development as a film destination was the Bend Chamber of Commerce’s decision to fund Fort Benham for $30,000. A 200-foot-by-200-foot replica stockade by Benham Falls, Fort Benham was built specifically for The Indian Fighter but also with the goal of attracting other film productions.

“United Artists, not the U.S. Army, built the stockade known alternately as Fort Benham and Fort Laramie in 1955,” the Deschutes Historical Museum said in an exhibit devoted to Bend’s cinematic history. 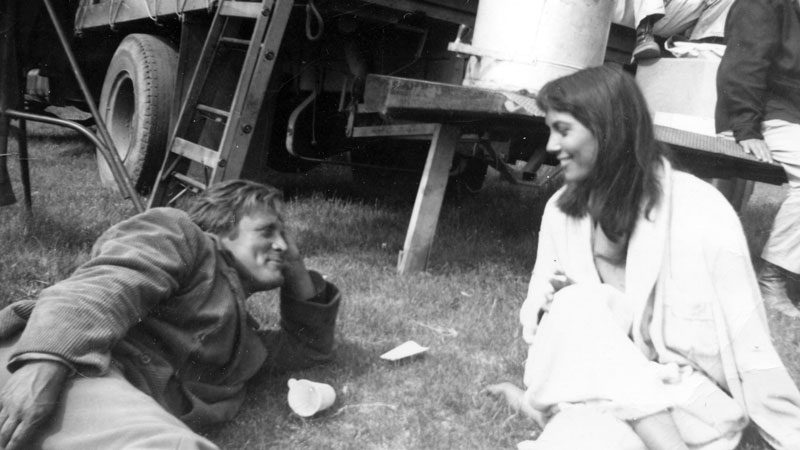 Kirk Douglas and Elsa Martinelli on the set of The Indian Fighter, 1955.

“We’re really at a place where everyone is looking at what else is out there from an economic development standpoint,” added Cannon-Miller, who points out the Shevlin-Hixon Mill had closed five years earlier and Bachelor Butte’s transformation to the Mt. Bachelor ski area was still three years away. “Our shift to tourism is still very much in the planning stages. People wanting to make Bachelor Butte a world-class ski area are realizing you need more hotels, more gas stations, a better road up to the mountain. The area’s really looking to create a new industry following the loss of Shevlin-Hixon and the business community really stepped up. Hollywood took notice that Bend’s open and welcome (for film production), and businesses are willing to support this new emerging industry.”

The films Oregon Passage (1957) and Tonka (1958) both used the fictional fort, as did several episodes of the TV show Have Gun, Will Travel, which aired from 1957 to 1963. (The criminally underrated Day of the Outlaw was shot in the same time period, but didn’t use Fort Benham, and was instead filmed in the snow at Dutchman Flat Sno-Park and Todd Lake.) Unfortunately, a fire in 1962 damaged much of the area around the fort, and it was later demolished as it became a fire danger itself (and a bit of a house of moral disrepute, according to locals).

Despite the loss of Fort Benham, Central Oregon continued to attract major Hollywood pictures. Mara of the Wilderness (1964) (think female Tarzan set in the Cascades); Kirk Douglas and Robert Mitchum in The Way West (1967); the Disney comedy The Apple Dumpling Gang (1974); and John Wayne’s True Grit sequel, Rooster Cogburn (1974) all staged scenes in and around Bend in the 1960s and ‘70s.

While Westerns initially dominated movie productions in the area, the 1980s ushered in an era of unintentionally hilarious, yet really bad films. St. Helens (1981) attempted to depict the 1980 Mount St. Helens eruption—yep, that’s the Pine Tavern doubling as the exterior of Whittaker’s Inn—but instead the volcanic ash looked more like the Nothing from The Neverending Story and the romantic storyline felt like something out of a rejected Northern Exposure episode. 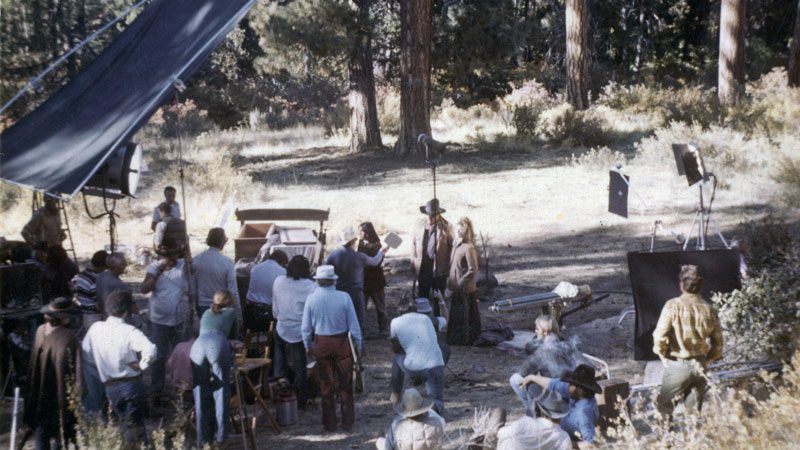 Just as bad, but not nearly as serious, was Up the Creek, which featured a 36-year-old Tim Matheson, of Animal House fame, as a 12th-year college student who is essentially blackballed into entering the national collegiate whitewater championships by the dean of his school. (Yes, that is the basis for the entire movie.) Heavy on recycled jokes from Animal House and Porky’s (and light on plot), Up the Creek did not earn the adoration of the cinematic world.

“The only thing good about this movie is Chuck, played by Jake the Wonder Dog,” wrote Washington Post film critic Rita Kempley, who called the film a “moist smut movie.” “Chuck has all the best scenes. Still, that brave little pooch is Up the Creek without a dog paddle.”

Since Matheson guided fictional Lepetomane University to immortal whitewater rafting fame on the Deschutes, Central Oregon has seen Chance, Shadow and Sassy try to make their way home in Homeward Bound: The Incredible Journey (1993); Kevin Costner and Tom Petty trek through Smith Rock in The Postman (1997); Steve Zahn awkwardly pursues Jennifer Aniston in Madras in Management (2008); and Reese Witherspoon finds herself out of water in the Badlands east of Bend, which was transformed into the Mojave Desert for Wild (2014).

Stay tuned, as more films will surely make use of the beautiful and diverse Central Oregon landscape in the future.

Share This Article
« From Sourdough to Kimchi, Fermented Foods on the Rise in Bend
Get a Taste of Sen Thai Hot Pot in Bend »