You are here: Home / Adventure / Six Cozy Fire Lookouts and Ranger Station Rentals for a Winter Stay in Central Oregon

Have you ever dreamed of being a forest ranger or a fire lookout? Even if you never made that career happen, you can play make-believe with this popular winter activity: rent a forest lookout or ranger cabin for an overnight adventure. Because of remote locations, road closures and plenty of snow, these winter wonderland sites are sometimes only accessed by cross-country skiing, snowshoeing, or snowmobiling. Scoring this particular night in the woods requires some advanced planning, but a little perseverance on Recreation.gov can result in awesome rewards, such as beautiful winter vistas, brilliant night-skies, a warm winter shelter and a truly unique winter experience. 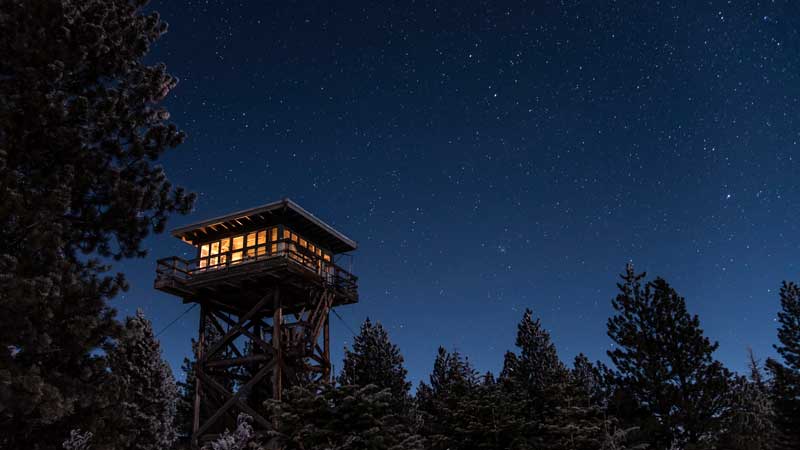 Some of the structures are still used as fire lookouts or for seasonal staff during the fire season, but off-season, the lookouts and cabins are available to rent because of the Federal Lands Recreation Enhancement Act. Collected fees go into preservation of these historic structures, which would otherwise be decommissioned and possibly torn down. Each rental offers different amenities such as propane stoves, stocked kitchens, solar-powered lights and woodstoves, so peruse each site online to know before you go.

Here are a few of the fire lookout and forest cabin rentals to add to your bucket list. 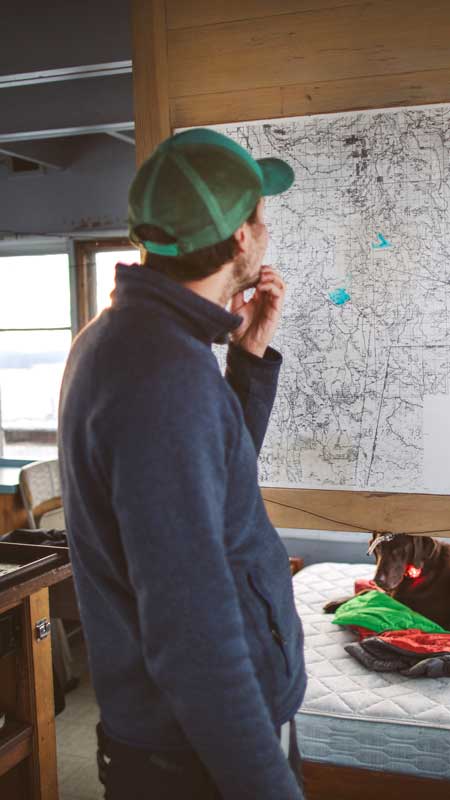 Perched atop Hager Mountain at 7,195 feet, the Hager Mountain Lookout is used during the summer as a fire lookout and in the winter as a rental. Located in the Fremont-Winema National Forest 15 miles south of Silver Lake, the six-to-eight-million-year-old volcanic dome is known for its summer wildflower blooms and inviting solitude. In winter, the trail to the lookout follows the closed road; the four-mile-long stair-master ascent for skiers or snowshoers gains 2,200 feet. The summit’s viewshed is spectacular, stretching from Mount Shasta north to Mount Hood and east across the Basin and Range. The indigenous Klamath People called the peak “Chock-chock-lisk-se,” which translates to “bald faced rock,” a reference to the rocky summit and another early name for the peak—Bald Mountain. Early settlers also called the peak Hagerhorst Mountain after a local pioneer rancher from the Silver Lake Valley; that name has been shortened to Hager Mountain. No matter the name, be prepared to be blown away by the brilliance of the night sky.

Twenty miles west of Dufur (almost rhymes with obscure—as in the middle of nowhere) this 14- by 14-foot lookout is perched atop a 40-foot-tall tower in the southeast corner of the Mount Hood National Forest. Accessible in winter by ski, snowshoe, or snowmobile, on a clear day one can view numerous Cascade peaks from Mount Rainier to the Three Sisters and south to Mount Thielsen. Two trails loop to the cabin and though their distances seem short, three and four miles respectively, the ascent can still be a challenge due to weather. A 1960s-era lookout, Fivemile Butte has received several upgrades inside. Outside, there is a metal catwalk with a pulley system to lower and raise supplies such as firewood from the ground-level woodshed up to the lookout. The only downside is that the outhouse is at ground level.

Located along Ochoco Creek in the Ochoco Mountains east of Prineville, this ranger cabin was built in 1940 and has had several upgrades. The two-story house has the luxury of indoor plumbing that the lookout rentals lack. Nestled in amongst towering ponderosa pines, the cabin offers excellent opportunities to explore Big Summit Prairie and winter trails originating from the Walton Lake Sno-Park. Skiers, snowshoers, sledders, and snowmobilers will all find terrain and trails that suits their passions. After a fun day exploring the snow and surrounding forests, the warmth of the cabin allows for folks to stretch out in the living room or snooze in one of the several bedrooms. Don’t be surprised if your party is serenaded by howling coyotes or hooting owls at night. 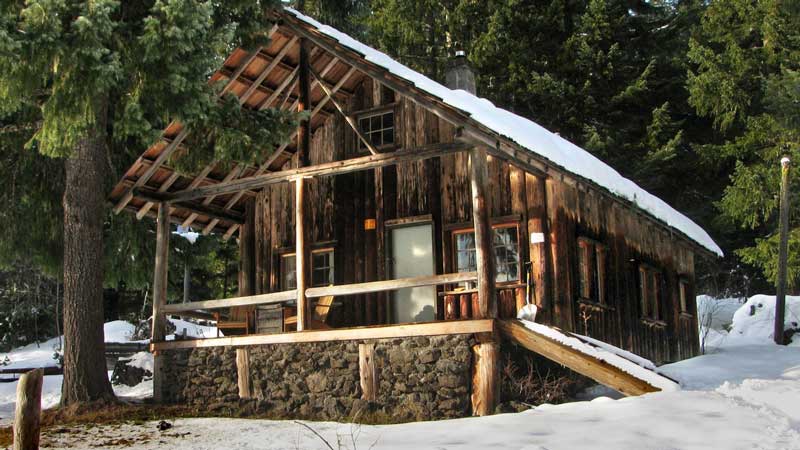 This Willamette National Forest site, located at Fish Lake near McKenzie Pass, brings history to life. Indigenous peoples used the area to hunt, fish, and forage for plants and berries for thousands of years before fur trappers and settlers began exploring the area or following the Santiam Wagon Road over the Cascades to the Willamette Valley. A way station at the site housed overnight travelers and, once the area became part of the National Forest system, rangers and mule packers. Today, the depot’s Commissary Cabin and Hall House, both constructed in 1924, are two rentals available in winter. Renters can take advantage of trails right out their front door or visit seven different sno-parks within a 20-minute drive. Numerous marked Nordic ski, snowshoe, and snowmobile trails offer miles of winter fun through deep forests and open meadows. A group of retired Forest Service personnel formed Friends of the Fish Lake to help preserve this historical treasure and keep alive the echoes of freighters, indigenous peoples, and pioneers who passed through this region.

This tower cabin sits on Clear Lake Butte, a 4,454-foot gently sloped hillside covered with fir trees, on the south side of Mt. Hood. Overlooking Clear Lake and Timothy Lake in the distance, views are readily on hand, as is fishing, hiking and wildlife viewing nearby. One of three Forest Service watchtowers on Mount Hood, Clear Lake Cabin is still used to spot fires during summertime each year. Originally 100 feet tall when it was built in 1932, the tower was replaced with the current 40-foot building in 1962. The cabin is atop a 40-foot tower and is surrounded by a wooden catwalk. The 14-by-14 room is furnished with a small bed, a wood stove and a propane cook stove. The lookout can only be accessed by skiing, snowmobiling or snowshoeing four miles from a parking area at the Skyline Sno-Park.