Tumalo couple Rand and Holly Rodes Smithey are both self-taught artists who collaborate on contemporary art. 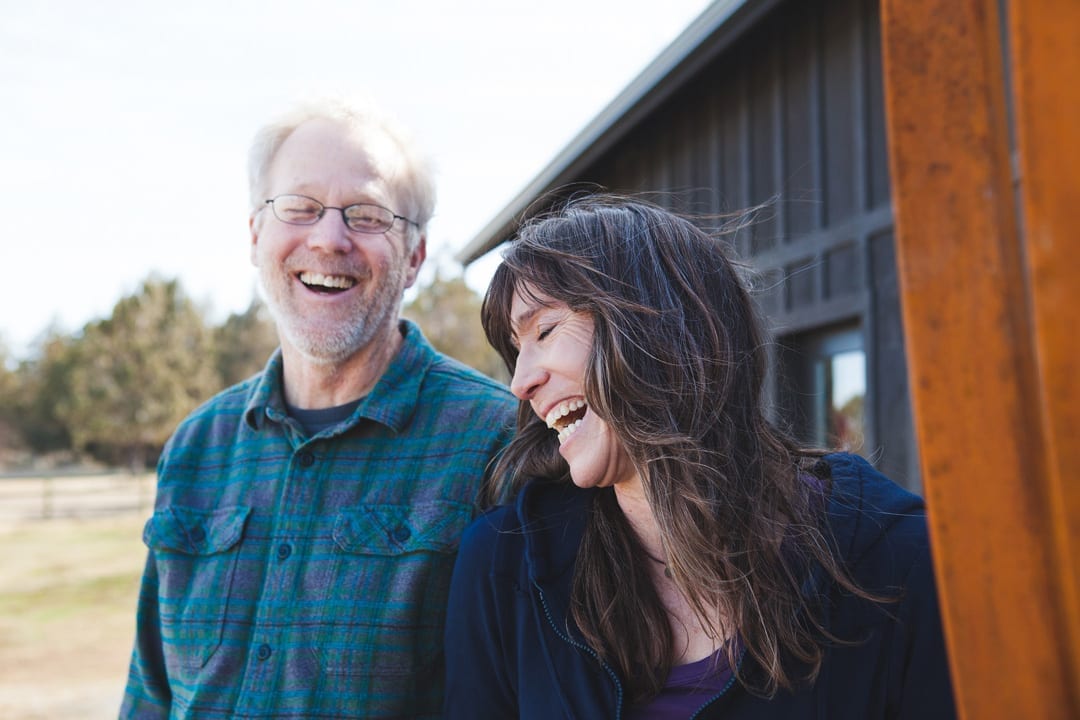 Lovers of contemporary art and natural desertscapes will find the perfect confluence of the two off Innes Market Road near Tumalo. That’s where Rand and Holly Rodes Smithey have built their home on ten acres with Cascade Mountain views and studios for making and showing art. The place is relatively easy to spot—just look for the contemporary metal sculptures rising from a former hay field in seemingly random displays of curves and geometry.

As they walk visitors through their two studios, the couple recounts meeting each other in 2002, marrying in 2006 and the collaboration that’s defined their lives. “It’s been about us coming together and having a similar eye,” said Holly, with Rand adding, “We tend to gravitate to the same pieces when viewing art.” 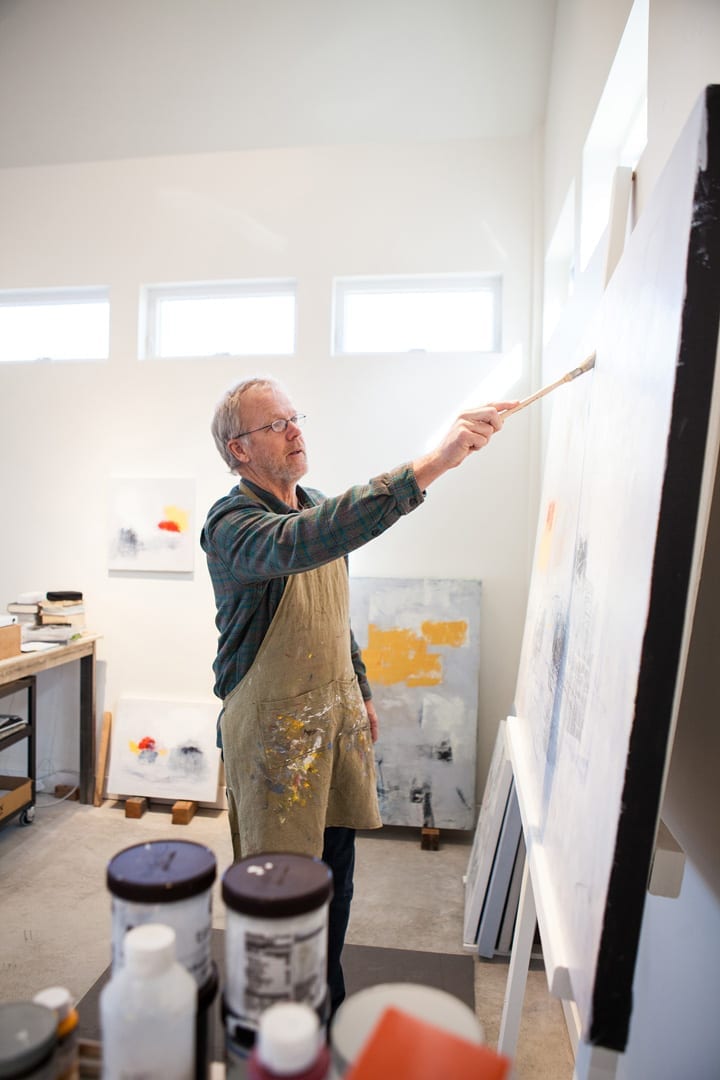 Their artistic expression is decidedly abstract and non-representational. In general, Rand creates steel sculptures, large and small, on wood and stone pedestals. He and Holly occasionally collaborate on large sculptures and metal paintings. Holly assembles patinaed metal and mixed media into paintings for wall display. Both spend time metalsmithing in the studio they built in 2004 and remodeled three times to accommodate their growing need for space. They recently finished a second studio with high, open spaces and a profusion of natural light for Rand’s big acrylic and oil paintings.

Self-taught, Holly enjoys the sense of discovery and physical aspects of making art. She moved to Bend in 1996 and worked for five years at the paddle company, Kialoa, where she hand-shaped outrigger canoe paddles. “I liked using my hands to create things,” she said, using that experience to segue into welding to express her art after meeting Rand.

“I draw inspiration from a sense of place and its connection with architecture and the natural world,” she said. “The work is guided by this combination of transitions, a fabric of rhythm and pattern between the visual and physical in a sculptural way.”

Also self-taught, Rand was influenced by “the wonderful sculpture collection” at Western Washington University in Bellingham where he studied science and literature. “I take pieces of vocabulary, transform and recombine them to create my own abstract visual language,” he said. “Sometimes I use explicit symbols. In my paintings, the ladder is metaphor for aspiration, our need to become more than we are, more than we think we can be, more than others expect of us. It’s about transcendence.” Rand often borrows from literature to title his paintings, including “Sea Starved Hungry Sea,” from a poem by W. B. Yeats or “Earth in Forgetful Snow,” from a poem by T.S. Eliot. 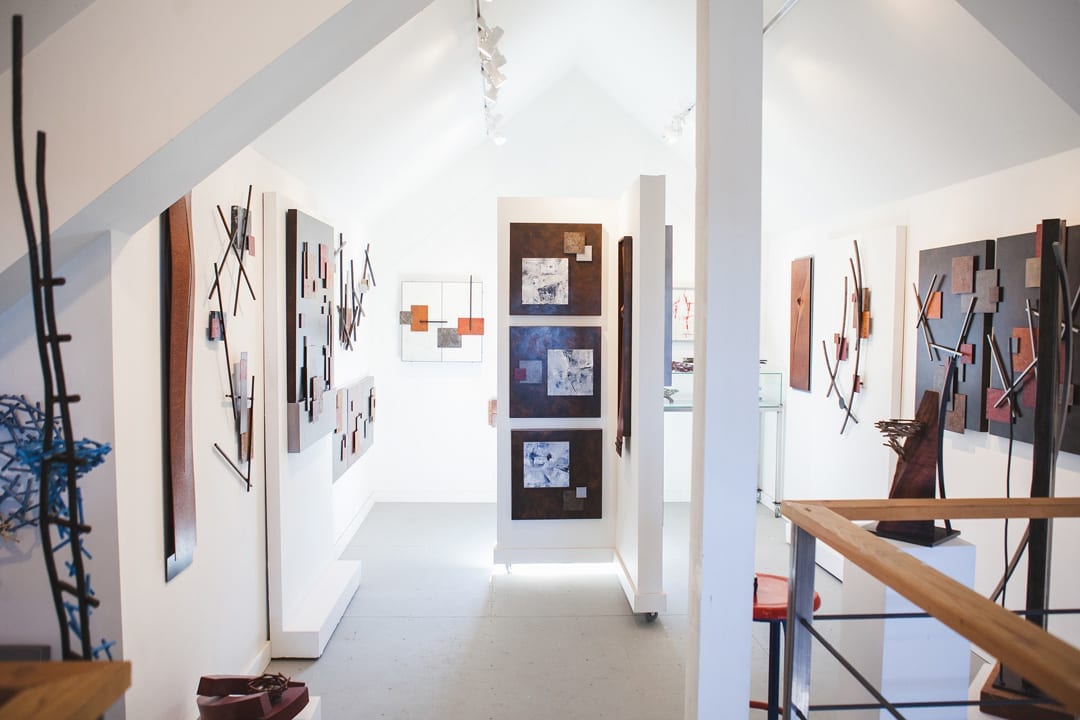 The Smithey’s gallery and workshop at home.

To share their love of art and artmaking, the Smitheys conduct workshops and are offering a new series of one-to-three-day classes from May through August. They’ll be teaching welding, mixed media techniques of acrylic paint on copper, abstract painting with the influence of poetry and abstract painting with the influence of sound. “We love the amazing energy participants bring,” said Holly, and Rand adds, “It’s a relaxed atmosphere with lots of room for people to explore.”

Both Rand and Holly have joined the Peterson/Roth Gallery in downtown Bend as gallery artists and will be the featured artists in May. Gallery Director Ken Roth said the pair has been active in the Central Oregon art scene for years and has a loyal following. “It’s unique to have a married couple who share ideas and a work space,” he said.

The Smitheys also do commissioned pieces, and their work, which sells for $500 up to $9,000, is collected coast to coast. Members of the public can make an appointment to visit their studios and meet the artists.