You are here: Home / Culture / Sign of the Times: Mural Projects around Bend

For a town that seems to have a little bit of everything, Bend is a virtual desert when it comes to murals, those vibrant urban canvases that seem to be everywhere in most cities. 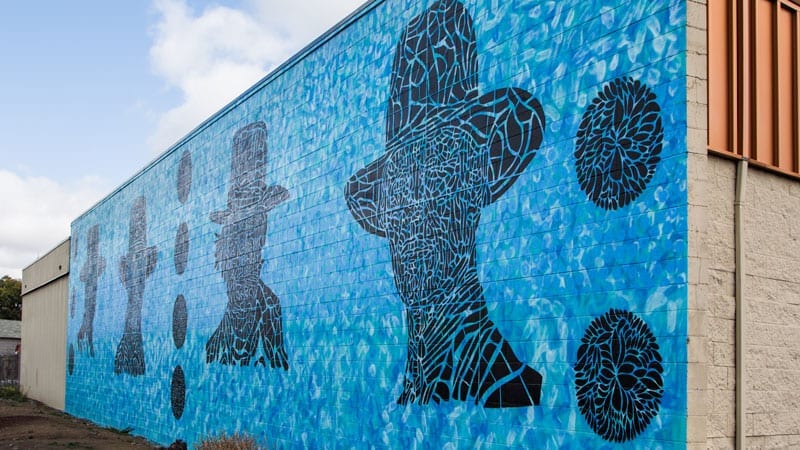 Doug Robertson wants to change that. An artist and the founder of the nonprofit organization for the High Desert Mural Festival (HDMF), Robertson has been rallying artists and public art supporters to change a long-standing city policy that effectively banned murals.

“There were basically zero murals in Bend, so we needed to start [the conversation] there,” Robertson said.

Prior to 2015, murals were prohibited under the city’s restrictive sign code. Robertson got the city to take a small step forward in 2016 by lifting the ban in the so-called Makers District, a swath of industrial and retail business just east of the railroad tracks north of Greenwood and south of Olney avenues.

The response to the murals within the pilot project area was overwhelmingly positive, said Robertson. Business owners, like Lisa Johnson of Cascade Heating, appreciated the way murals act as a deterrent for graffiti while making an artistic statement. Johnson commissioned Robertson, to paint the “Blue Cowboy” mural on the west-facing wall of the building, which can be seen from the Bend Parkway. 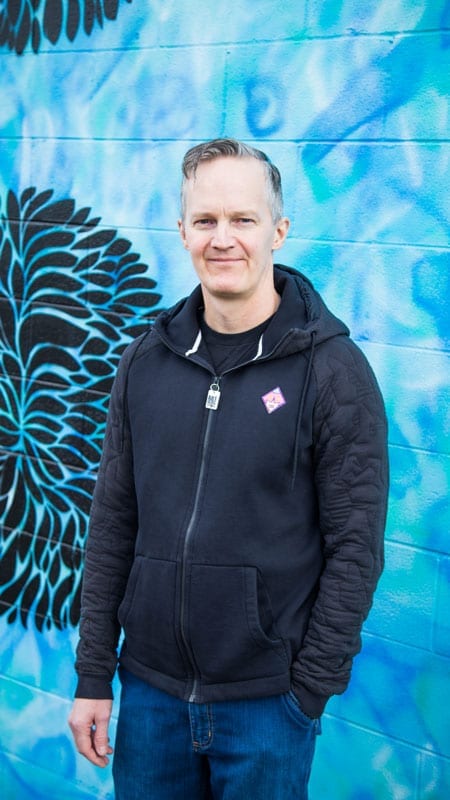 The liquid-blue mural started as a sketch and grew into a two-story canvas that features silhouettes of two cowboys donning Josie Wales-style hats and floating in a kaleidoscope background of color.

Despite the success of the program it wasn’t clear if the mural policy would be relaxed in other areas of the city. But in January the city got a request, that made them reconsider the mural policy as it related to the entire city.

Pine Ridge and Elk Meadow elementary schools proposed a joint mural project to paint a retaining wall near an adjacent canal. Teachers and administrators pitched the project as a way to promote the arts among students while also being proactive about preventing vandalism and graffiti. However, because the proposed mural would be visible from nearby Brookswood Avenue, the project was prohibited under the sign code and was blocked by the city. Pine Ridge Assistant Principal Ned Myers, who also serves as board president for the High Desert Mural Festival, asked the council to revisit the code.

“We basically leveraged 200 fifth graders by pitching it as, ‘You’re restricting their educational opportunities,’” said Robertson.

The city acquiesced. After reviewing and revising some of its sign policies, the city council voted unanimously this past spring to permit murals on nonresidential properties throughout Bend with a few exceptions. According to the findings from the public hearing, the council found that murals could “tell a community’s stories… increase appreciation for the arts and artists and increase overall attractiveness of the space.”

The 5th grade classes from Pine Ridge and Elk Meadow schools hope to complete their mural project in spring of 2020, but the policy change has opened the door for other projects as well. Over the summer, Central Oregon LandWatch, a nonprofit advocating for sustainable planning and healthier communities, partnered with local artist Kaycee Anseth to re-imagine the pedestrian crossing at the Franklin Avenue underpass as a safe, welcoming, and vibrant public space. Her work can be seen in the walkway linking Bend’s downtown to the emerging Central District west of Third Street. 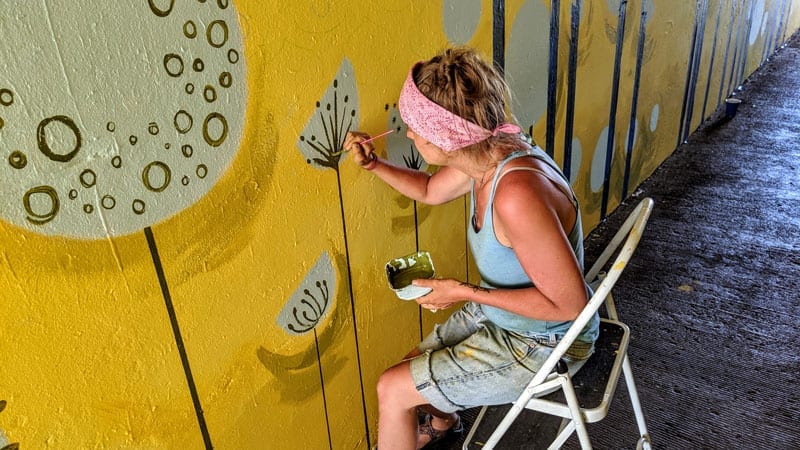 For Robertson and the High Desert Mural Festival, the real work of raising the visibility of public arts in Bend is just beginning. “We’re hoping to get as many murals up as possible and then build on that,” he said.