You are here: Home / Business / Spider City Brewing is Owned Entirely By Women

Spider City Brewing is not only Bend’s newest brewery, but it is also the only brewery in the region run entirely by women. 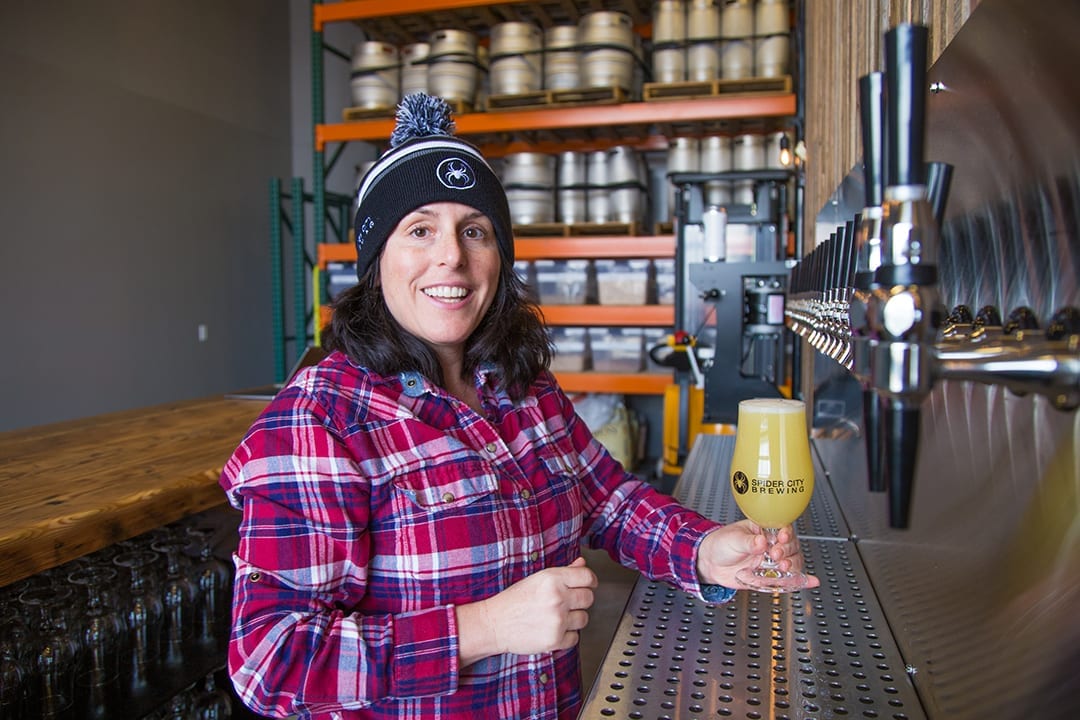 Bend’s newest brewery, Spider City Brewing, opened late last year on Bend’s east side and gained attention not only for its unusual name (a reference to the residential garage that housed Spider City’s pre-launch homebrewing system) but also because it is Bend’s only brewery owned entirely by women.

Twin sisters Melanie and Michele Betti and Tammy Treat spent the last several years planning the brewery and developing recipes, homebrewing in the garage while homing in on their brewery and taproom concept. Longtime friends, the brewery idea was a pipedream long before it was a plan.

“We met each other at California State University, Chico. We all have a passion for beer and dreamed of one day opening our own brewery. Perhaps it was all that Sierra Nevada we drank at Chico,” joked Betti.

What’s it like going from homebrew-sized batches to fifteen-barrel batches?

We invested in a SABCO BrewMagic Pilot brewhouse and four glycol-chilled stainless-steel fermenters in order to be able to brew on a system that would mirror to some extent our fifteen-barrel brew house. This system has allowed us to brew at a professional level and work on our recipe development.

How has being a sommelier (and owner of The Wine Shop) helped you with beer and brewing?

As a sommelier I know what is in balance and what is out of balance in wine and beer. I have traveled all over the world for wine, and in every country that I visit I always make sure I check out the beer scene. I have always loved beer just as much as I love wine. It is that passion that drove me to open a brewery and to make good, quality, clean beer.

You’ve already got quite a variety of beers on tap. Are there any styles that you look forward to brewing?

We will always keep things fresh at Spider City Brewing. Michele, Tammy and I use our travels to inspire us. We are going to be coming up with some very cool hopped recipes that I think the public will enjoy and some kettle sours that will be super drinkable.

When you were homebrewing and developing recipes, were there any notable successes that made it to the commercial level?

Yes. We have a few recipes that are some of our most popular in which rye and rye flakes are used in the malt bill. The key to a good malt bill is keeping it simple, but then trying to see if there is a malt that can add complexity to the overall profile of the beer. I’m talking two to three percent to the overall recipe.

Were there any notable failures? What did you learn from those?

Of course, yes! Our fruit beers gave us some of the most trouble. Using fresh fruit is always the preferable method. It may cost a bit more and take a little longer, but the results are worth it. And like I said before, the key to a good recipe is keeping the malt bill simple. And the hop additions minimal too. There are several tricks you can use to get the most out of a hop. If you get too complex, then everything gets muddled.

I know the brewery has just launched, but are there any plans to package the beer in cans or bottles?

Yes. We plan on canning our beer in sixteen-ounce cans. While the public is waiting on those you can always stop by the southeast side brewery and pick up a Crowler or two to go. Those are always fun!