You are here: Home / Culture / Heritage / The Lost Ski Areas of Central Oregon

Central Oregon is known nationally for outdoor recreation, and that’s in part because of the amazing skiing around here. However, years before Bachelor Butte became a resort destination and people flocked to Bend for our snow, back when skiing was still considered a new sport in the United States, local clubs and residents tried their hand at skiing some other local spots. These old ski hills may have been lost to time, but a local historian is digging their stories back up.

The 1965 Junior Olympics were held on Pilot Butte. Pictured is the ski jump competition, with spectators and fellow competitors watching from the sidelines.

“A lot of the history we’re talking about here wasn’t written down, so much of it is largely unknown,” Stenkamp said. “I’m really happy to help share that history and keep it alive.”

To understand how Central Oregon grew as a ski destination requires an understanding of a certain old Bend club. The Skyliners Club, a group of
like-minded individuals who enjoyed outdoor recreation, was formed in 1927. The group’s first goal? Find a permanent and organized area for winter recreation, such as skiing, ice skating and old-school toboggan sledding. 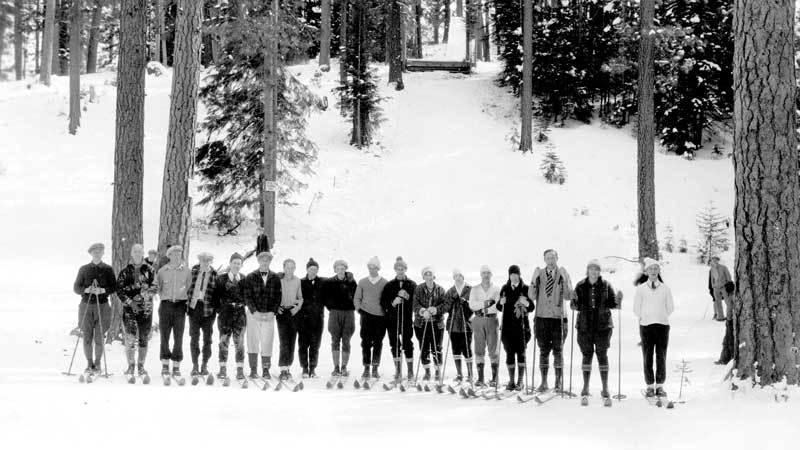 “The Skyliners selected a spot seven miles west of the town of Sisters on Forest Service land, next to the original path of the Oregon Skyline Trail,” Stenkamp said. “Construction of a small lodge, a toboggan run and ski jump were completed in time for a December 1928 opening.” The lodge was expanded only a year later to accommodate for the popularity of the site, where skiing competitions regularly saw jumps of over 100 feet.

However, due to a combination of factors such as non-plowed roads, the distance from Bend and the somewhat inconsistent snowfall on the hill, the Skyliners would look for a new spot by 1934, killing the McKenzie Pass ski area by 1935. They moved up to Tumalo Creek, to a fledgling ski area that had first been established with an ice-skating rink in 1933. Over the years, the Skyliners worked to upgrade the hill, adding in lights for night skiing, a lodge, warming hut, a ski jump and even two rope tows to help skiers up the hill. “Before the rope tows, people really had to work to ski,” Stenkamp said. “You really had to want it, to hike those hills over and over.” The hill at Tumalo Creek remained popular until 1958 when Mt. Bachelor officially opened its ski runs.

While the Skyliners Club was doing their thing, other Bend residents were trying to figure out more places to hit the slopes. Overturf Butte began as a toboggan hill in the 1920s, but it wasn’t long before skiers showed up. Eventually, the hill was upgraded with lights for night-time activities, but the toboggan hill proved to be a bit too steep and led to more than a few hospitalizations. Similar to the original Skyliners Hill west of Sisters, Overturf ski area died out due to the opening of the Skyliners Hill near Tumalo Creek. 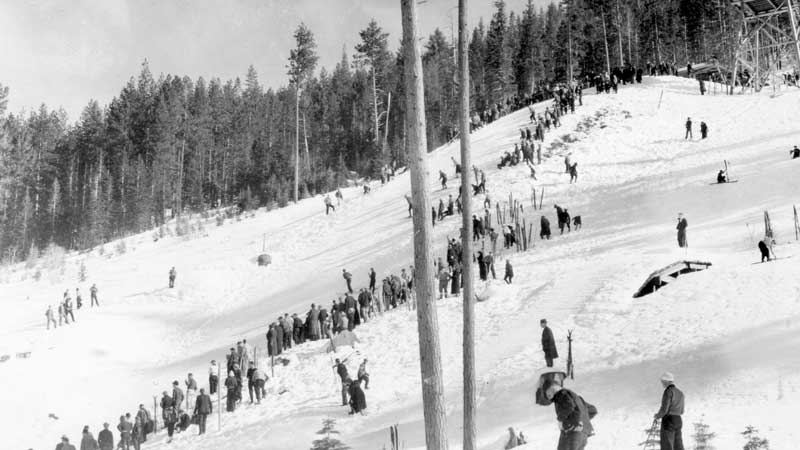 By 1935, the Skyliners had moved their ski area and jump to Skyliner Hill near Tumalo Creek.

In 1962, members of the community expressed their interest in reopening Overturf Butte as a local ski area, but decided to develop Pilot Butte instead when the landowners at Overturf refused. The proposed development included a nearly-too-large ski jump fit with a rope tow, artificial snow and lights that would be open all season long for years to come. However, fundraisers fell short as Mt. Bachelor grew in popularity, and the partial funds were instead used for a temporary ski jump and snow machines on the north side of Pilot Butte, above what is now Pilot Butte Middle School, used only for the 1965 Junior Olympics.

“The first jumper had too much speed and ended up in the sagebrush at the bottom of the hill,” Stenkamp said. “The winner of the jump competition was also the smallest competitor; four-foot eight-inch Jerry Martin from Minneapolis, Minnesota.”

Despite the success of the 1965 Junior Olympics, which had 2,500 people in attendance, Pilot Butte and the other smaller hills just couldn’t compete with Mt. Bachelor. Aside from the new resort eroding the other hills’ popularity, the smaller hills also dealt with more inconsistent snowfall and unplowed roads that made access more difficult. As Mt. Bachelor grew and gained resources, it began to plow roads, offer ski lifts, lodges, classes, competitions and more; all of these amenities were too good to pass up, and other hills were left high and dry, mostly forgotten to history.

That is, until Stenkamp uncovered their past. Thanks to the work of historians like Stenkamp, we can look back and remember the legacy of our community, when people came together for the love of snow. These early hills tell tales of perseverance that directly contributed to the huge popularity of Central Oregon as a winter recreation destination. Any avid skiers, snowboarders and more have these early developments, and the people who pioneered them, to thank for their modern passion.