You are here: Home / Adventure / The Ochocos Unleashed 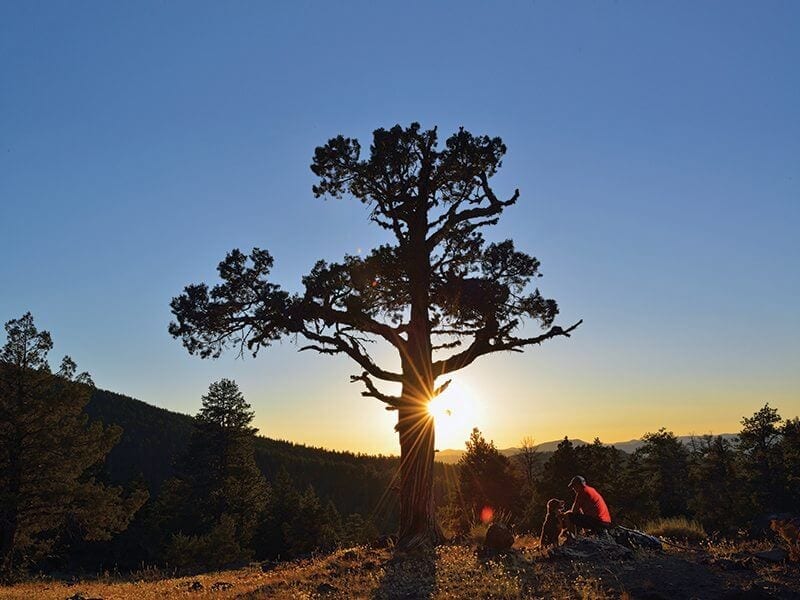 Like much of Central Oregon, the Ochocos were born from a violent past that includes massive mudslides, volcanic eruptions and storms that left the land piled with ash up to 1,000-feet deep. Today, it’s a place of secluded canyons, dancing creeks, whispering meadows and open forests that invite exploration. The only thing missing is the crowds. 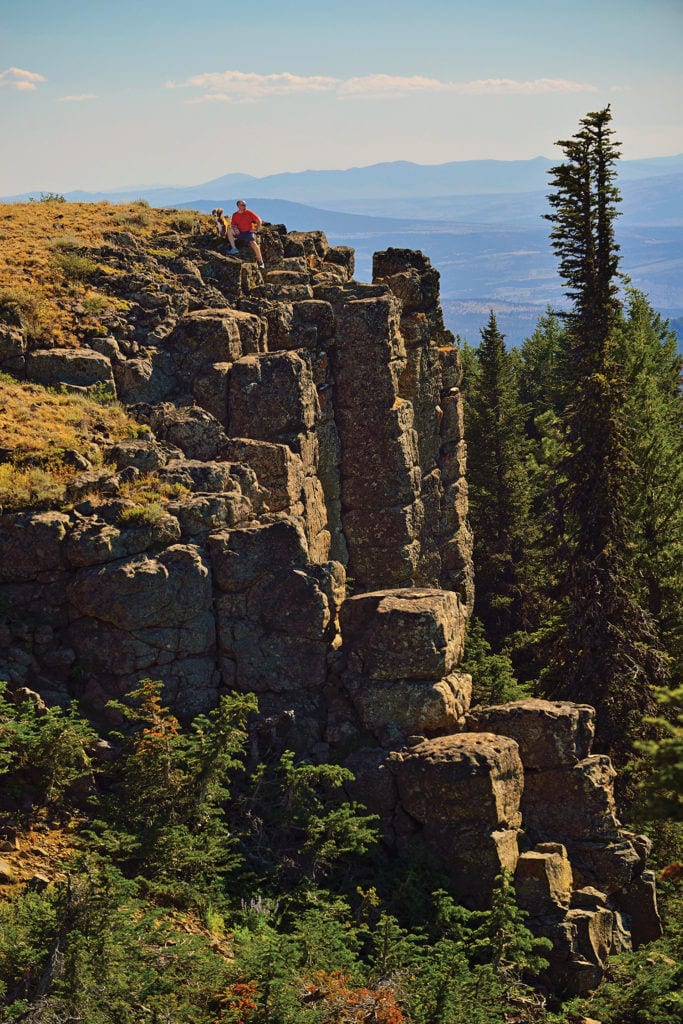 Perhaps the most well-known and popular destination in the Ochocos, Lookout Mountain is just a short drive east of Prineville and also the tallest peak within the range. There are several access points, beginning with an eight-mile trail near the Ochoco Campground on County Road 123. Those looking for a shorter route with more direct access to the summit can continue southeast to Forest Road 42. From there, a jeep track winds to the Baneberry Trailhead and the historic Independent Mine site where three different routes meet to lead you to the summit. The multi-use trails get foot, horse and mountain bike traffic throughout the spring, summer and fall seasons. But on a recent weekday excursion that spanned more than five hours on the trails, we encountered not a soul. Still, it’s easy to see why locals have added Lookout as a go-to destination. Even in midsummer the trails were in superb biking condition, thanks to the abundance of shade offered by towering old-growth fir and pine trees. Where small springs pop up, the landscape turns verdant with ferns and grasses more closely associated with the McKenzie River area than the far eastern edge of Central Oregon. While we were able to push, pull and sometimes carry our bikes to the summit, the trail is more suited to hiking over the last mile or two. At the summit, hikers are rewarded with expansive views over thousands of forested acres stretching miles westward. On the horizon, the peaks of the Cascades rise in a stately formation, glaciers clinging stubbornly to their sides.

“It’s the crown jewel of our trail system,” said Drew Peterson, a recreation foreman with the Ochoco Ranger District. 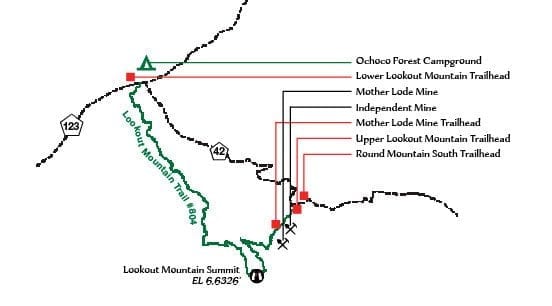 Dog-friendly Rating: 3/5
As with all trails within the Ochocos, there are no leashes required for dogs. However, opportunities for water are limited to the few springs on the trail. Precipitous ledges at the Summit also require owners to keep a close eye on pets.

Trail Notes:  While the seclusion is nice, it also means that hikers and bikers need to be prepared for all eventualities in the backcountry as cell phone service is spotty and help may be slow to arrive. But for those who have endured overfull campgrounds and jammed trailheads all summer, the Ochocos are the perfect antidote. For bikers, Lookout offers an attractive destination as an easy two-car shuttle. Simply drop the second vehicle at the trailhead near the Ochoco Campground, then proceed to the upper trailhead off Forest Road 42. From the top, it’s a roughly eight-mile downhill screamer back to the shuttle car. For bikers wanting a more traditional cross-country experience, the Ochoco-Round Mountain Trail offers an extended ride with plenty of climbing and descending. 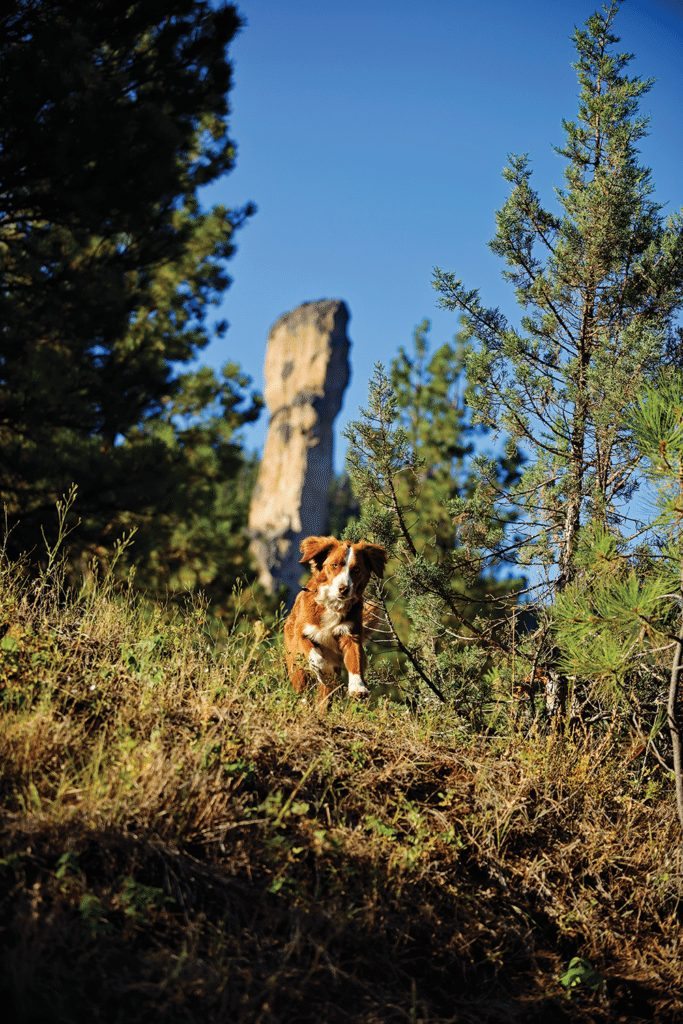 One of the most iconic and photographed features within the Ochocos sits just a few miles east of Prineville. Located just north of Ochoco Reservoir, Steins Pillar soars roughly 300 feet from the forest floor, looming like a sentinel over Mill Creek. While easily observed and photographed from Forest Road 33, which parallels Mill Creek, intrepid explorers can access a trailhead from a dead-end spur road. From there, hikers and their companions have a two-mile hike to the base of the basalt column pillar. A geological anomaly, Steins Pillar is evidence of the area’s violent volcanic past and the subsequent eons of erosion that stripped bare the surrounding soil and left the solid pillar standing as a solitary reminder of a more tumultuous time. 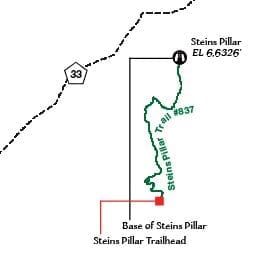 Dog-Friendly Rating: 3/5
This four-mile, out-and-back trek is an ideal length for a family outing. However, as one of the more heavily visited trails in the area, it’s a good idea to keep your dog close to hand to minimize conflicts.

Trail Notes: Steins Pillar is believed to be named after Major Enoch Steen, a civil war veteran and early explorer. His name was often misspelled as “Stein”. In the case of Steins Pillar, the misspelling stuck, as did the possessive grammatical error. Steens Mountain outside of Burns also bears his name, albeit correctly spelled.

About Dogs and the Ochocos: There are currently no leash restrictions in place at any time in the Ochoco National Forest, including the Wilderness areas. However, rangers encourage visitors to bring and use leashes to minimize conflicts between trail users. Leashes also prevent dogs from harassing wildlife and vice versa. “We understand that dogs are members of people’s families and we take their safety into consideration. In the end the more responsible dog users will be rewarded with a better experience,” said Drew Peterson, recreation foreman for the Ochoco Ranger District. 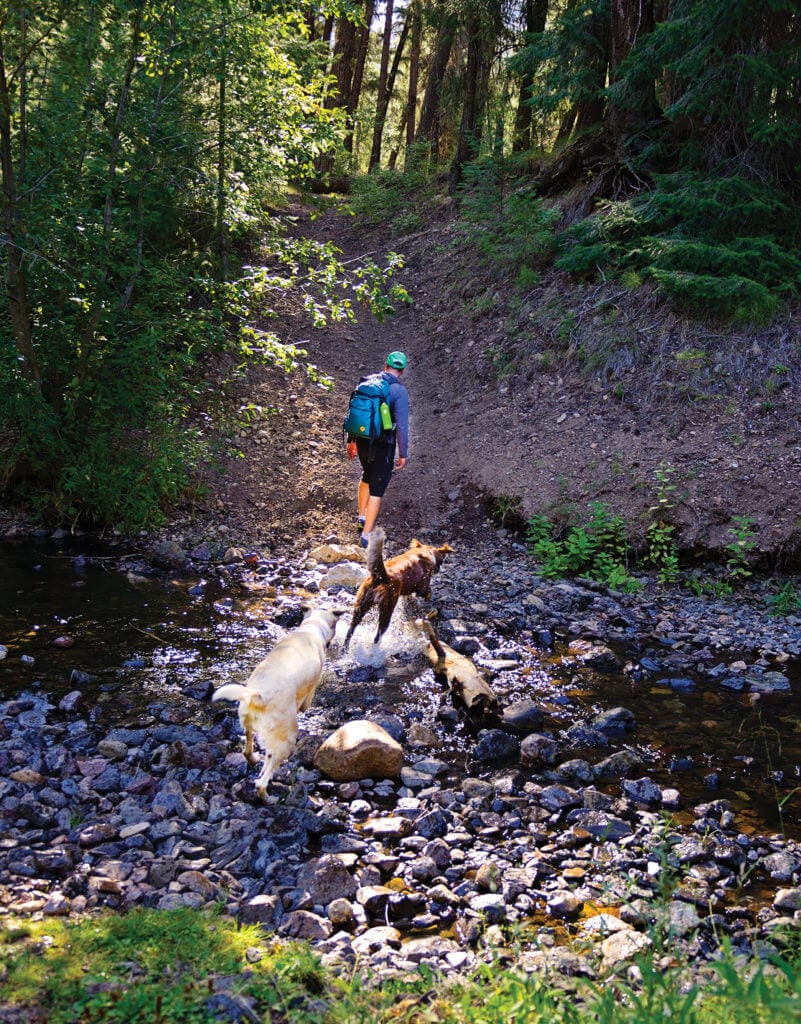 Just a few miles beyond Steins Pillar is the southern access for Twin Pillars. The trailhead is located at the entrance to Wildcat Campground on the edge of the Mill Creek Wilderness. While much of the wilderness area was severely impacted by a wildfire in the late 1990s, not all was lost. In some respect the wildfire has helped to reveal views of the surrounding landscape, including better sightlines to the namesake Twin Pillars. This area is also a great place to visit when fall colors begin to emerge.

“The great thing about the Ochocos is that they actually feature a lot of fall foliage, not in comparison with the East Coast, but we have lots of aspen and larches,” said Drew Peterson, Ochoco National Forest recreation foreman.

The Mill Creek Wilderness is also a good window into the devastation that can be caused by wildfire, whether sparked by nature or humans, and the slow but steady recovery in an otherwise healthy ecosystem.

Like other places in the Ochocos, Mill Creek Wilderness is short on crowds and long on solitude. During a recent visit, we spent the night at Wildcat Campground with the camp host as the only other occupant. We locked our rigs at the trailhead, but the only real danger was a cougar that had apparently been sighted recently in the area. We didn’t see any signs of the big cat, but we did flush a grouse and spotted a healthy wild trout that was idling in a small pool alongside the trail. Most impressive though were the massive Ponderosas spared by the wildfire. These stately trees have reached full maturity with trunks four and five feet in diameter. These are the few remnants of giants that drew lumbermen to the region a century ago, providing fodder for sawmills in Bend and Prineville. Today those mills are idle and the trees that were spared the saw comprise a commodity of a different sort. 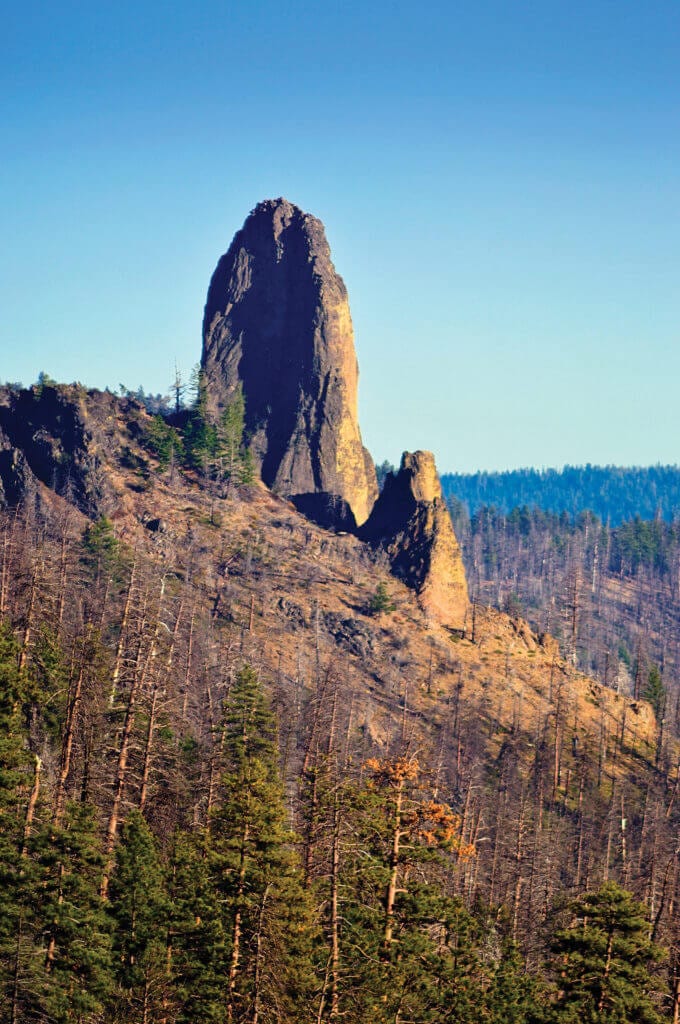 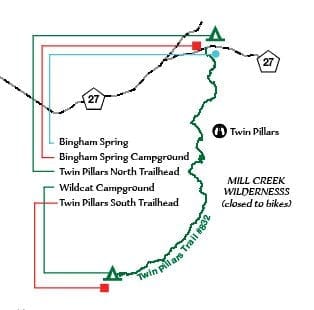 Dog-friendly Rating: 5/5
An abundance of water and plenty of room to roam make this a great spot for an extended hike with your dog. The fact that it gets light traffic minimizes the potential for conflict.

Trail Notes: The Twin Pillars trail is accessible by northern and southern trailheads. The namesake pillars are located closer to the northern trailhead near Bingham Springs. Because most of this trail lies within the Mill Creek Wilderness, it is minimally maintained. There are no bridges to assist with stream crossings, of which there are several. However, water levels are lowest in fall, making this less of an issue.