You are here: Home / Adventure / Three Winter Ski and Snowshoe Adventures in the Willamette Pass Backcountry

Oregon State Highway 58 climbs over the forested slopes of the central Cascade Mountains from the east side logging town of Crescent to Willamette Pass before descending along the Middle Fork of the Willamette River to Eugene. The road passes sparkling Diamond Peak, an 8,774-foot mountain that dominates the southern skyline, Crescent and Odell lakes, Salt Creek Falls, and the Willamette Pass Ski Area. For a winter retreat, the Willamette Pass area has it all: sno-parks from which to Nordic ski or snowshoe, snowmobile trails, a ski resort, overnight lodging and restaurants, plus a whole lot of wild places. 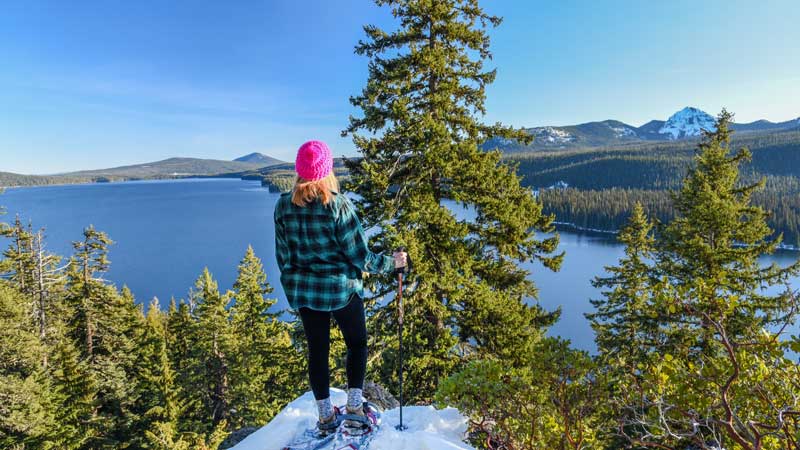 My wife and I spent a mid-week winter retreat at the Odell Lake Lodge and Resort. Built in 1903, making it one of the oldest lodges in Oregon, the lodge is located on the southeast end of the lake adjacent to the lake’s outlet. This cozy and laid-back resort offers rustic cabins with kitchens and gas heat, as well as rooms upstairs in the main lodge, which is what we chose. Downstairs is the Fireside Room, a communal space for enjoying the wood-fire warmth or sharing stories with fellow travelers on a cold winter night. The restaurant offers indoor and outdoor dining (during the summer) serving delicious breakfast, lunch and dinner meals, as well as dessert specialties: marionberry cobbler or mud pie.

Our days were spent visiting nearby sno-parks where we strapped on snowshoes or Nordic skis to explore miles of marked trails. Back at the lodge, we enjoyed after-dinner strolls along the lake’s edge. In the Willamette forests, we found beautiful and rugged scenery, spectacular views, dense forests and uncrowded trails. 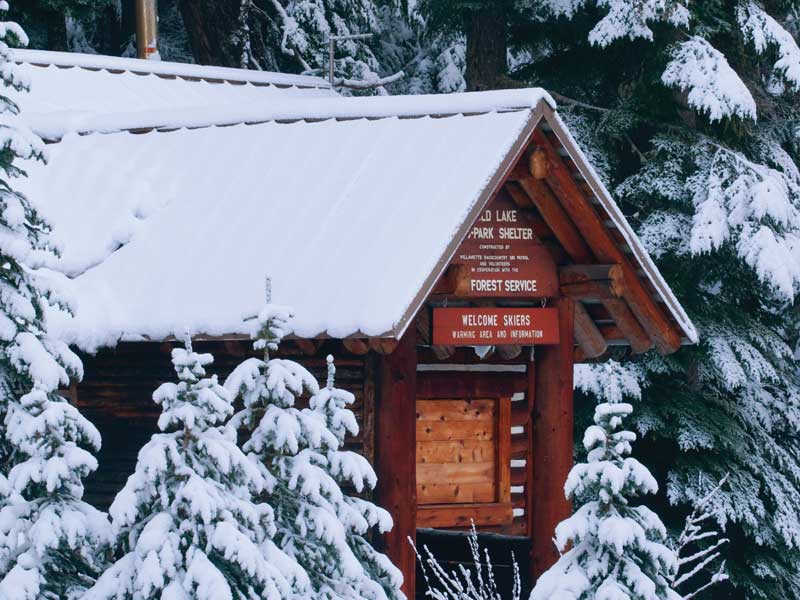 Nearly seven miles west of the resort along Highway 58 is the Gold Lake Sno-Park, a hub for many ski and snowshoe trails. At the sno-park, the Willamette Backcountry Ski Patrol volunteers operate out of a warming hut, providing information and rescue services. The volunteers shared great trail and history tips, including filling us in on early settler William H. Odell, for whom the lake was named.

On our first morning, we crossed back over the highway from the sno-park and struck out on snowshoes for Gold Lake. We passed through dark forests of Douglas fir, western hemlock, subalpine fir, and western white pine, all laden with fresh snow from the night before. The occasional “whump” of snow hitting the ground reminded us to beware of overburdened branches overhead. Blue diamonds marked the route and we enjoyed breaking trail to the lake and some side trails to the Marilyn Lakes, as well as having lunch in the three-sided Gold Lake Shelter, built in the 1940s, as snow continued to fall.

The next day, we returned to the Gold Lake Sno-Park and this time put on our Nordic skis and headed south towards Pengra Pass and Eagle Rock, an overlook of Odell Lake along the Pacific Crest Trail. Pengra Pass honors B.J. Pengra, a 19th-century pioneer who promoted Willamette Pass as a military road and railroad route across the Cascades.

Though the trail intersections were well signed, we had to pay close attention to few-and-far-between trail markers. “We ain’t in the Deschutes anymore, Toto,” became a refrain regarding the difference between the Willamette and Deschutes national forests in terms of trail signage. 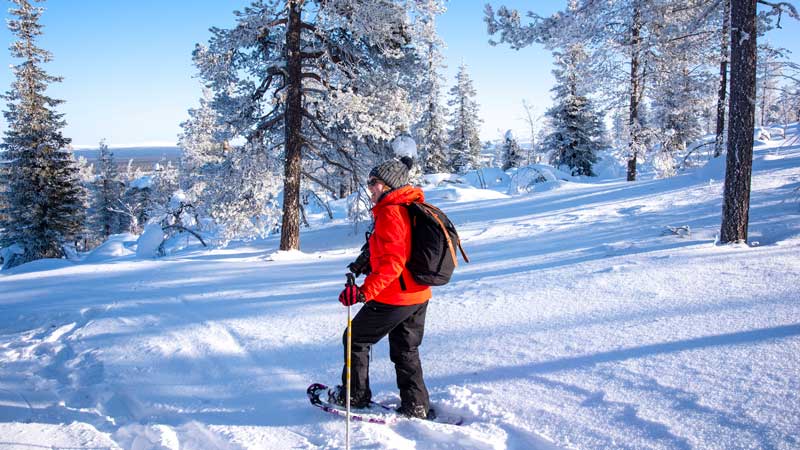 Although a low-cloud ceiling covered the high peaks as we reached the pass, we were graced with outstanding views of Odell Lake in a short while. Our snowy descent through the hemlock and fir forest resembled the slash marks of Zorro rather than the graceful curves of a calligrapher’s pen. I made a note to myself: stick with snowshoes. 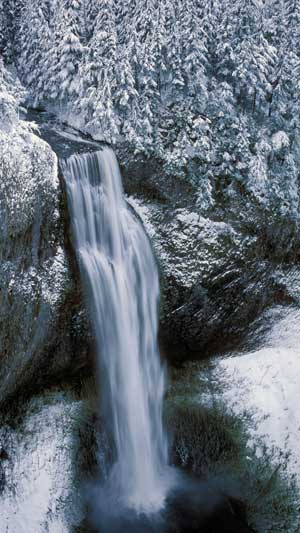 We began our final morning by driving about eleven miles west of Odell to the Salt Creek Falls Sno-Park. We hadn’t done much research into the falls, but we’d heard they were impressive; that turned out to be an understatement.

On snowshoes, we followed the closed road from the sno-park to the summer parking area and overlook. Salt Creek, which is also the outflow from Gold Lake, weaves through the forest on its way to the confluence with the Middle Fork of the Willamette River. At the overlook, the creek plunges nearly 300 feet over a lip of basalt. The scene was both beautiful and surreal at the same time.

Originally, we had planned to continue on our snowshoes to do the Diamond Falls loop, but the recent snowfall and road conditions made us rethink our time and our drive back to Bend. We opted to save this loop for another day, along with trails to Fuji Mountain, Fawn Lake, and Maiden Peak—an excuse to return.

For our next trip, perhaps we will try staying at Shelter Cove Resort, Crescent Lake Lodge or the Willamette Pass Inn, excellent options for overnight accommodations in the area. Nearby Manley’s Tavern, located in Crescent Junction along Highway 58, looks a little funky from the outside but the staff is friendly, and the tavern is known for its delicious fried chicken dinner. A little farther away from Willamette Pass is the town of Oakridge, about thirty miles west of Odell Lake, where visitors find more choices for lodging or eating, such as the Westfir Lodge or the 3 Legged Crane Pub and Brewhouse, as well as a Ray’s grocery store. Oakridge, once called the Shangri-la of the Cascades, also describes itself in winter as “above the fog line and below the snow line.”

For folks in Eugene, the Willamette Pass winter wonderland is an easy jaunt up Highway 58. For Bendites, it’s a bit more of a trek, but one worth making.