You are here: Home / Homepage: Top / Why Dogs Love Life in Bend, AKA Dogtown USA

Lily the Anatolian shepherd lives a full life here in Central Oregon—chasing squirrels through the high desert, riding co-pilot for drives through the mountains and splashing in the cold water of the Deschutes River. It’s a life her dad/owner, Nigel Wade, is proud to offer her. He snaps photos of Lily playing with her friends, a pair of German shorthair pointers named Riley and Maevis, he films her bouncing through snow for her TikTok account and he posts her milestones on the popular Dogs of Bend Facebook group. “We love living here and exploring together,” said Wade, who fostered and then adopted Lily through Cascade Canine Rescue East and West, or CCREW, in 2018. 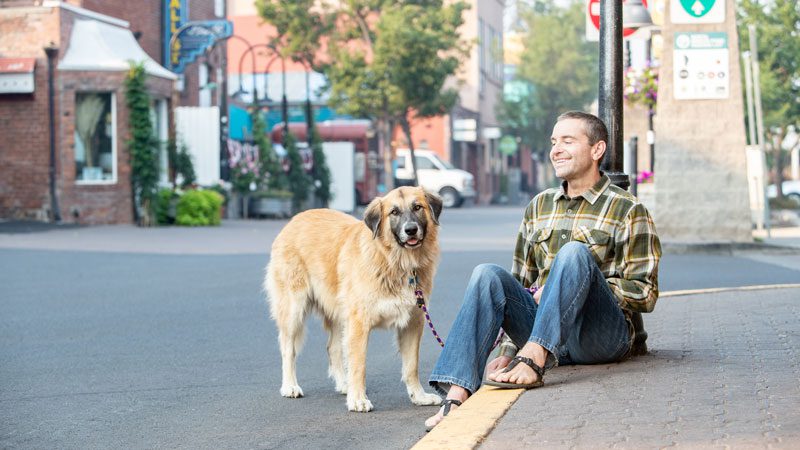 Before moving to Bend in 2014, Wade said he tried to make life fun for his previous dogs while living in Portland. But he didn’t always feel like the dogs were having the best experiences. “Us dog owners were only able to rush home on our lunches and take our pooches for your typical boring leash walk around your neighborhood or maybe go to a tiny, fenced-in dog park to let them play with other dogs,” Wade said. After arriving in Bend and adopting Lily, Wade began to appreciate the dog utopia that is Central Oregon. “Being a dog parent here in Bend allows us to literally hike along a beautiful river with our dogs legally unleased. Sniffing so many smells. Chasing chipmunks. Swimming in the river. Climbing rocks. A dog can be so much more of a dog here in Bend.”

Wade is one of thousands of dog owners in Bend, with some estimates in the past that suggested there’s one dog for every three people in the city. As more dogs move in, the dog-friendly services and activities in Bend continue to grow. What does that mean, exactly? Well, it’s everything from dog-friendly menu items at restaurants to doggie acupuncture and mud baths to playgroups and daycare, and even a new dog-friendly beer (it is Bend, after all). Bend is truly a dog town like no other.

When pups arrive at the five-and-a-half acre Doggieville Ranch, they see far more than a grassy yard for training, dog daycare and boarding. The ranch, 20 miles north of Bend and just west of Redmond, is the archetype of dogs living the good life, with hiking trails, swimming and plenty of room for naps after a long day. Owner Trudy Gardner describes it as a doggie “amusement park,” welcoming a small number of pups each day for training, daycare or overnight boarding. “We wanted to create a wonderful, clean and green environment with water features, structures to play on, space to run and areas where your dog can be alone, if wanted,” said Gardner, who moved from California to Central Oregon in 2016. “I am the epitome of a Bend dog owner. It’s why I moved here,” Gardner said. The facility goes above and beyond a traditional dog kennel, and has seen so much demand from the region’s dog owners that she and co-owner Larry Johnson are opening a second location right in Redmond. “With so many people moving to Redmond and Bend, keeping up with the demand is becoming more and more difficult. This will give us an opportunity to entertain more dogs,” said Gardner, who loves offerings pups room to roam and have fun even when their owners are on vacation. “We have so many fun things to do at the ranch because just like kids, dogs get bored,” Gardner said.

The ability to roam free is one of the best parts about being a dog in Central Oregon, according to members of DogPAC, a local organization that works to expand off-leash access for dogs in the area. The group works with the U.S. Forest Service and the Bend Park and Recreation District to enhance off-leash offerings and push for more off-leash water access. Members helped create and maintain the area’s only off-leash ski and snowshoe trails and help with maintenance of the Deschutes River Trail and Rim Rock “Good Dog” Trail, both just outside of Bend off Century Drive.

In addition to miles of off-leash hiking trails in the nearby forests, Bend itself is home to eight off-leash dog parks, with a mix of fenced and unfenced options, and some with small dog areas or water access. Residents in Bend are enthusiastic about having dedicated areas and amenities for dogs and dog owners, according to Julie Brown, communications and community relations manager for the Bend Park and Recreation District. Brown said during regular community surveys about what the community wants from the district, offerings for dogs are always top of the list. “Amenities for dogs and dog owners are always really highly ranked, and so that’s one of the reasons we have prioritized that from our community,” Brown said. In 2022, Bend will debut its ninth off-leash dog park, a section of the planned Alpenglow Community Park in the southeast part of town. 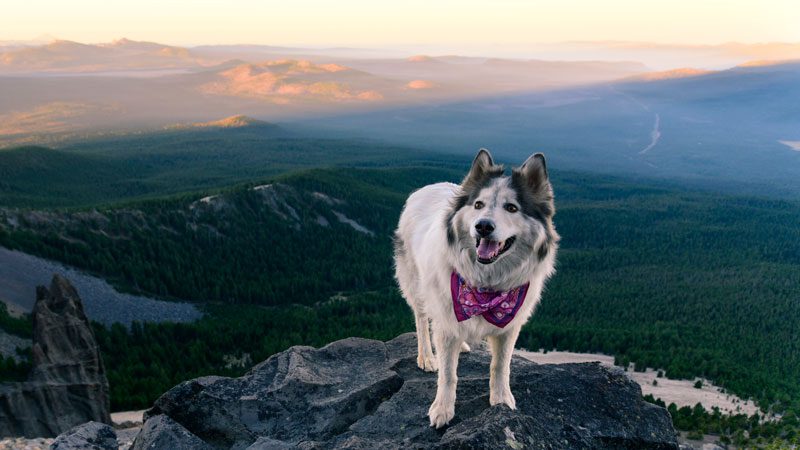 When humans move to a new place or gauge the quality of living in one city versus another, healthcare is often an important topic. And for many dog owners in Central Oregon, the area’s health and wellness offerings for pooches are of upmost importance. It’s another area in which Bend has gone above and beyond, offering top-notch veterinary care and some unique wellness offerings sure to leave any dog thriving, pampered and with a clean bill of health.

When Heather and Nick Downing-Barrier’s Saint Bernard mix Arwen was diagnosed with osteosarcoma—bone cancer—the family began a process to treat the disease. Arwen’s leg was amputated, and she underwent chemotherapy and physical therapy, all here in Bend. “I follow a lot of other osteosarcoma dogs in Instagram, and not everyone is so fortunate to live in areas that offer all these services,” said Heather Downing-Barrier. Arwen went to Stride Canine Rehabilitation and Fitness Center in southwest Bend, where she used an underwater treadmill and balance disks as part of her therapy. With successful treatment here in town, Arwen’s prognosis improved, and she continues to explore Central Oregon today—often via a paddleboard on a nearby lake.

Elsewhere in Bend, dogs are getting a mix of wellness and healthcare through services like canine acupuncture and chiropractic care, both of which are offered at Sage Veterinary Alternatives. Veterinarian Leslie McIntyre was one of only two providers offering acupuncture when she first moved to Central Oregon in 1990, but today she estimates there are as many as fifteen providing the service. McIntyre uses acupuncture and other Chinese medicines to treat everything from arthritis and joint pain to cancer and other chronic diseases. Among McIntyre’s patients are geriatric and injured dogs, as well as hardworking agility pups, mushers and other sporting dogs.

Healthy pooches can get clean and even indulge a bit at many of the grooming facilities in town. At Muddy Paws bath house on Century Drive, owners can drop off Fido for a bath, grooming or more extensive services, like a canine massage or mud bath. Dogs can soak in hydrating oils and vitamins for a deep clean or in peppermint and menthol oils to invigorate an athletic or arthritic body. The mud baths can help with shedding and leave the dogs with a hydrated skin and a glossy coat, plus they’re massaged in, something that bath-loving dogs enjoy, said owner Kimberly Rafilson. “They’re getting a little more of that hands on treatment than they would with a typical bath,” Rafilson said. “It really makes a huge different with the dog’s coat.” An a la carte menu offers more options for dogs, including a brush out, nail trim and polish or teeth brushing. 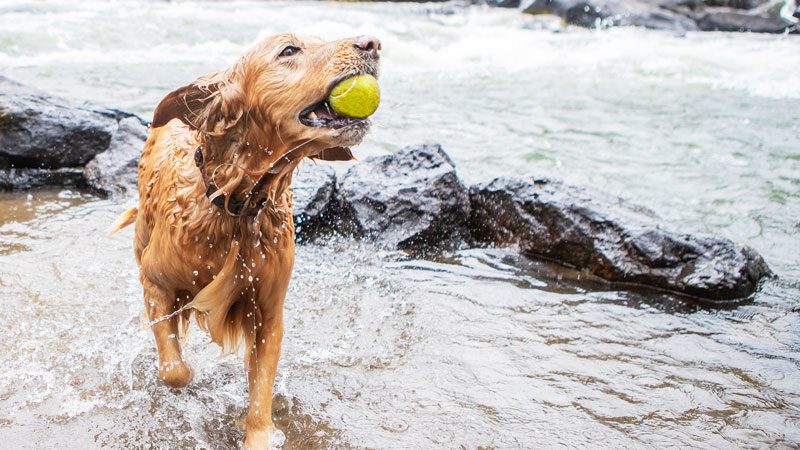 Jaxson Jaxson loves to play in the Deschutes River in Bend, especially if there is a
ball involved! Photo Jill Rosell

Over the years, Bend has earned a dog-friendly reputation, and even accolades. The city was named the most dog-friendly place in the country by Dog Fancy magazine in 2012 and again by Dogster magazine (which merged with Dog Fancy) in 2017. These rankings recognize that Bend is not only a dog-friendly place for locals, but also a destination for those who prefer to travel with their four-legged companions.

Bringing a dog to Bend? Consider staying at the Oxford Hotel downtown, which offers a welcoming pet package at a cost of $59 per stay. Dogs are given an appropriately sized pet bed, two travel bowls (one to keep), organic dog treats and a map of local walking trails and parks. The hotel will even take care of the walk for you for an additional fee.

While out and about in Bend, it’s not uncommon to see dogs joining their owners at a growing number of restaurants that offer outdoor dining. At Worthy Brewing on the east side of town, dogs enjoy a spacious, shaded patio and, if they’re lucky, something from the dog menu. For $5, dogs can grab a Diggy Dog Scoop (chicken breast, carrots and cucumber) or an unseasoned burger, known as a Diggy Patty.

Speaking of breweries, some offer brews that support local animal causes, including Cascade Lakes Brewing Co., which debuted its new Pawsitive Pale Ale earlier this year. One dollar from each six pack sold at locations in Bend and Redmond support Central Oregon’s BrightSide Animal Shelter. Taking it a step further is 10 Barrel Brewing Company, which earlier this year released Good Sit Pup Ale, a non-alcoholic “beer” which is a glucosamine-enriched malt product safe for dogs to drink. All the net proceeds from the sale of the ale goes toward local shelters. If you ask your dog, they’ll tell you the ale is best enjoyed out in the sunshine, at the end of another dog-friendly Central Oregon adventure.