It’s a tough competition for the best fish tacos in Bend. 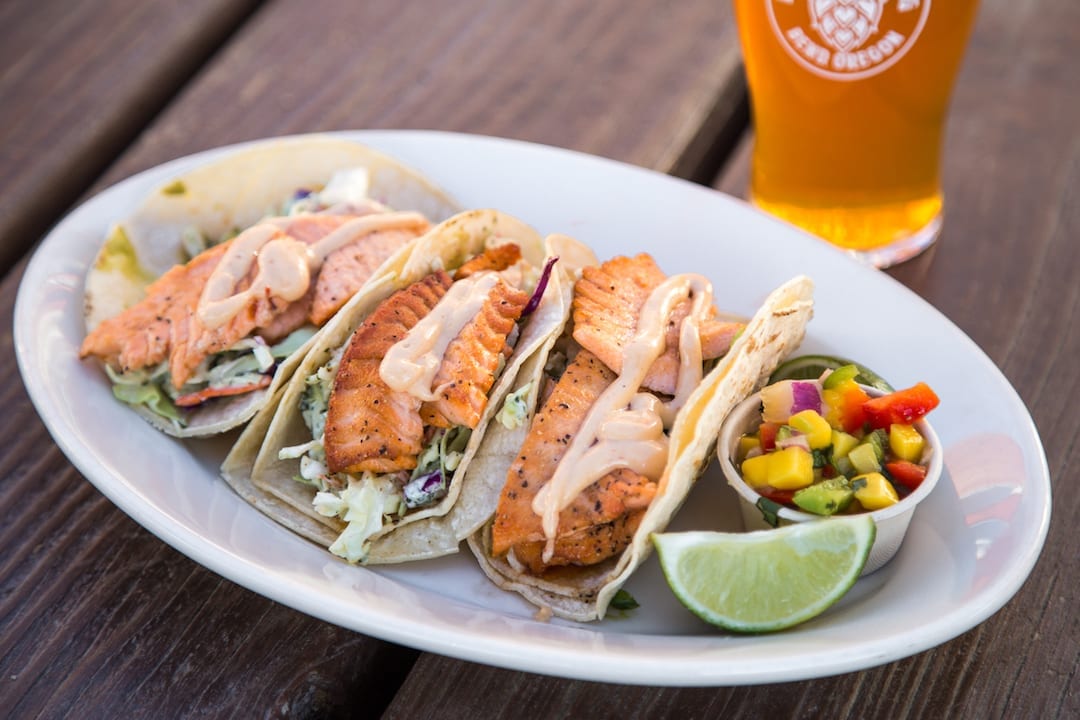 In terms of culinary trends, the world has already reached peak taco. It happened sometime between the invention of the ChocoTaco and the first time someone put kimchi on a pulled pork taco. Today, it’s hard to go to a restaurant or food truck that hasn’t put their spin on the street-style taco. Perhaps not surprising given Bend’s burgeoning reputation as a foodie destination, we have some great options in town. Since nothing says summer quite like scarfing tacos down on a deck under the sun and washing it all down with a cold beer, here are some favorites to try.

Around for almost two decades, Parilla is a staple for Tex-Mex-fusion. Parilla owner Jeff Dearing added the fried fish taco to the menu in 2002. Dearing said the breading has Hawaiian influences and the sauce drizzled over the top includes Japanese fish sauce, which gives it its flavor and spice. A lot of thought went into finding a sustainable fish to use and they settled on a catfish recommended by Seafood Watch, an organization of the Monterey Bay Aquarium. Parilla also cuts the fish by hand, a detailed touch that goes into this dish, and they worked with their food supplier to find the handmade flour tortillas they use. As for the corn salsa, Dearing said that using that salsa is part of what makes Parilla unique: incorporating its core ingredients into each culinary concoction. Bonus: You can get the fish tacos as a burrito or as a burrito bowl. Whichever way you choose, pair it with the $1 PBR to dine like a local.

Speaking of pairing tacos with beer, two of our craft breweries have produced a great alternative to the classic burger-and-fries order. Sunriver Brewing delivers a solid option with the grilled rockfish tacos that scream for the Fuzztail hefeweizen to wash them down. The trio comes with a red salsa on the side, but you really don’t need it. The fresh slaw and drizzled sauce—a chipotle aioli and a cilantro-lime sour cream—over the top takes care of any condiment cravings.

Worthy Brewing is a worthy opponent in this game (and will soon open a restaurant downtown entirely devoted to tacos and beer). The flagship location recently revamped its menu and now offers a steelhead taco, which is a game-changer in Bend’s taco scene. While steelhead, an anadromous trout in the Pacific Northwest, is known for its strong flavor, the flavors aren’t overwhelming in this dish. The price point is a bit higher, but the kitchen doesn’t skimp on servings. A guacamole base is topped with the steelhead, fresh cole slaw and a chipotle aioli drizzle. They recommend to pair it with a pale ale, but in the summer, opt for the lighter Kolsch or pilsner.

We’d be remiss if we didn’t include El Sancho, arguably the leader of the taco scene in Bend. Offering almost a dozen different styles of tacos to choose from, El Sancho has perfected what Bendites and visitors crave when it comes to the street-style taco. Next time you’re there, suppress your urge to order chicken, carnitas or barbacoa (for the umpteenth time) and try the grilled mahi mahi tacos. (A quick note: mahi mahi is not, as some people believe, shark. It’s a tropical dolphinfish also known as dorado that has tons of flavor.) Added to the menu when El Sancho opened their brick-and-mortar in 2015, the grilled mahi mahi tacos were an intentional choice to create a healthier fish taco option in Bend, said co-owner Jon Barvels. For this taco, it’s the slaw that separates it from the rest of the pack.

And while we’re on the subject of former food trucks, Spork also has a spicy and crispy fish taco unlike any other in town. The fusion-style cuisine is a must-try when in town. Its tacos are reasonably priced for their size and the flavors are on point. Similar to Parilla’s, Spork’s fish taco uses fried catfish. With just the right amount of spice from the chili mayo and jalapenos, it perfectly fits in with Spork’s eclectic and addicting menu.