You are here: Home / Food & Drink / A Japanese-Napa Fusion 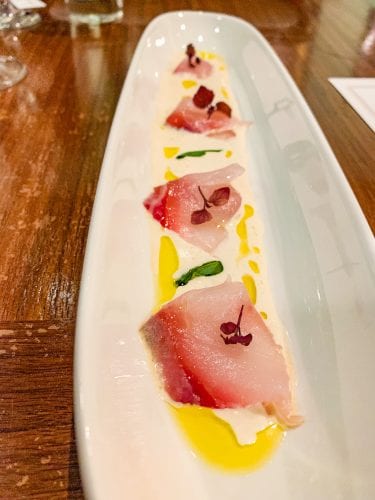 When I heard about the winemaker’s dinner at 5 Fusion & Sushi Bar, I was a little giddy. As a Sonoma County native, I was thrilled to spend the evening pairing a prix fixe dinner with wine from Sonoma’s neighboring wine region. Beringer Brothers, a well-known name across the Napa and Sonoma valleys, showcased some of their library and vintage wines strategically chosen by 5 Fusion’s artisan chef, Joe Kim, who achieved level one sommelier status last year.

Kim, a three-time James Beard Foundation award nominee, curated each course as 40 guests gathered together with winemaker, Mark Beringer. Don’t presume nepotism, just yet. Beringer’s family actually sold the winery to Treasury Wine Estates over 40 years ago, long before the young Beringer was in the wine game. After spending over 20 years building a resume in winemaking, he applied for a job with Beringer Brothers “as a joke.” Fast-forward three years, and he’s now the head winemaker for Beringer Brother’s–making him one of eight winemakers ever at the winery that his great-great-grandfather founded in Saint Helena 140 years ago.

I was pleased to start the evening with some bubbles of rosé, as I don’t see many sparkling rosé wines by the glass or by the bottle offered in Central Oregon. Chef Kim paired five Beringer wines, two of which were named number-one wine of the year by Wine Spectator, with a tapas course, three dinner plates, and dessert.

I typically don’t gravitate towards Chardonnay–in fact, I avoid the varietal–but the first two courses were paired each with the butter white wine. Let me just say, it’s humbling when I am pleasantly proven wrong. Both Chardonnay wines were almost devoid of the buttery and oaky qualities that are less than agreeable with my palate. Chef Kim paired the first Chardonnay with a Japanese striped bass Crudo served over the most savory and decadent lobster velouté I’ve ever experienced (a velouté is similar to a bechamel sauce).

We ate our way through seared scallops and a ramen fettuccine served with a slightly sweet and spicy braised duck ragu. The wagyu beef and dijon fingerling potatoes plate was undoubtedly the star course of the evening. We bid adieu to our feast over a cigar-smoked chocolate mousse and a dark chocolate semifreddo. I imagined that the smoked mousse would emulate the dessert-equivalent of a Mezcal tequila. Still, it was best enjoyed in small doses with bites of the basil-infused semifreddo as a reprieve from its smokiness.

Lillian Chu, owner of 5 Fusion, is looking forward to hosting more winemakers dinners early next year. She has been facilitating similar events for the past ten years, which raised over $400 thousand for organizations such as the KIDS Center and Ronald McDonald House of Bend. All of the Beringer wines that were served at this event are available for purchase at the Good Drop Wine Shoppe.

Disclosure: This event is the first for-profit winemaker’s dinner hosted by 5 Fusion.