You are here: Home / Home / A Modern, Minimalist and Noble Tetherow Home

A Tetherow home is designed for a clean aesthetic and maximum functionality. 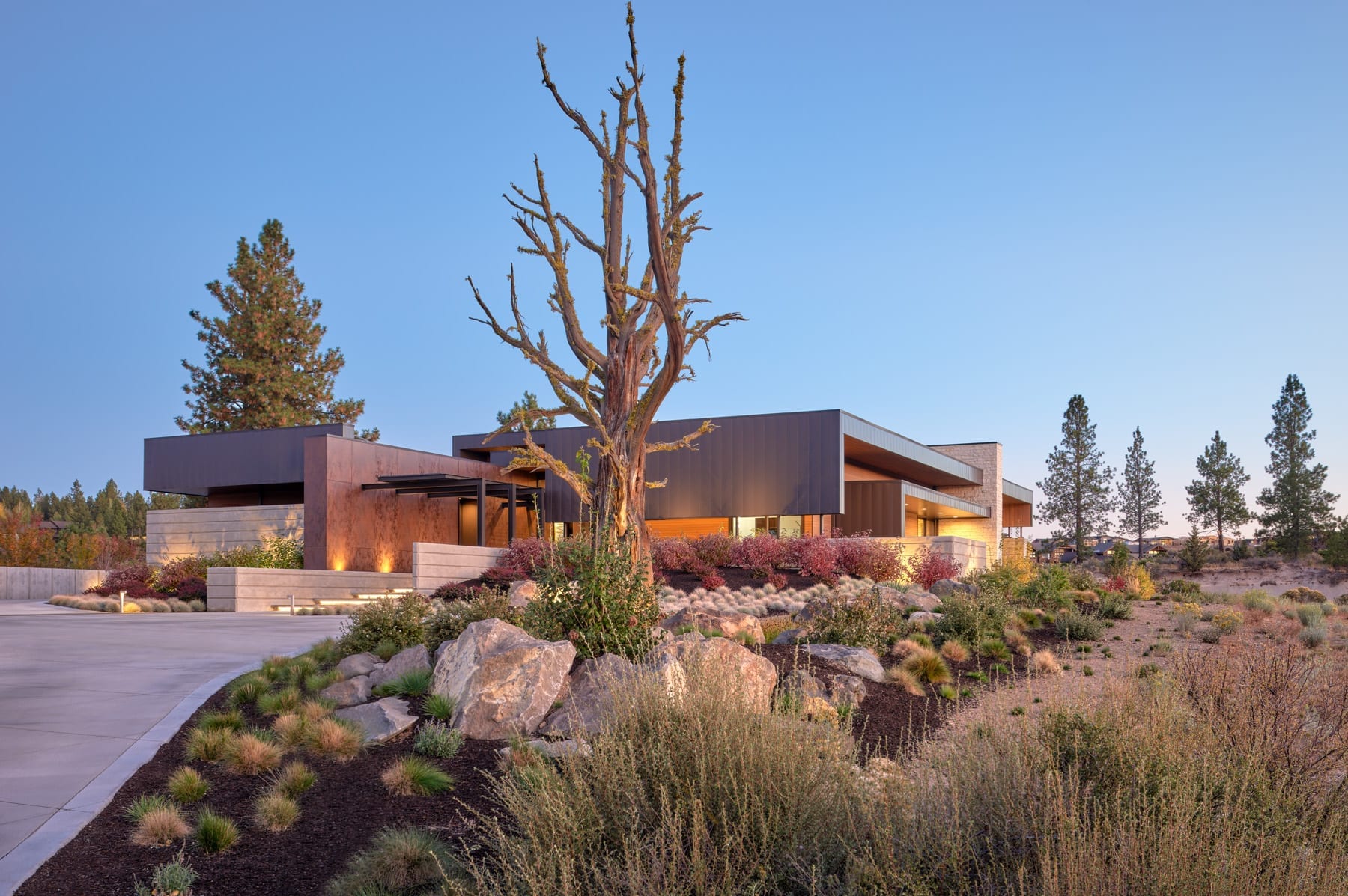 Mary and Greg Noble were some of the first buyers in the Bend luxury development Tetherow. In 2007, they purchased a lot on the 17th hole of the golf course, which sat on the rolling landscape between the west side of Bend and the national forest, boasted views of the Cascade mountains and offered plenty of room for the modern home the couple envisioned. Mary and Greg were both nearing the end of thirty-plus-year careers with Boeing and were eager to leave the Seattle area for Bend, which they’d visited on ski vacations for many years.

But as it turned out, they would have to wait. The economy stumbled and the Great Recession settled in, postponing their retirement. Still, though they knew a move to Bend was likely years away, they reached out to Bend architect Eric Meglasson and started a conversation about the home they desired. That conversation went on for many years, until the Nobles were finally able to break ground in 2013.

Meglasson said that the home, completed in 2015, would not be what it is if it weren’t for that lengthy delay. “During that time frame, I really got to know Mary and Greg,” he said. Meglasson even visited their Seattle home, seeing the ways in which they lived and posing questions about how that might be improved. Meanwhile, numerous site analyses were completed on the Tetherow lot to determine the best placement and orientation of the home. When go-time arrived, “we designed the house on the first pass,” said Meglasson. “I learned that the longer you stew on a project, the quicker the design process goes.”

The 3,300-square-foot two-level home that resulted is contemporary minimalist in style and yet long on livability and functionality. A primary feature is an interior courtyard completely surrounded by the house, which provides privacy as well as an aesthetic focal point that changes all year. “It’s outside, but feels as if it’s inside the house,” said Mary. “In the winter, it’s very interesting as snow falls and drifts into the courtyard.” Planters and boulders sit on a surface comprised of pavers and nearly black stones, and a single fir tree provides a Zen-like touch. 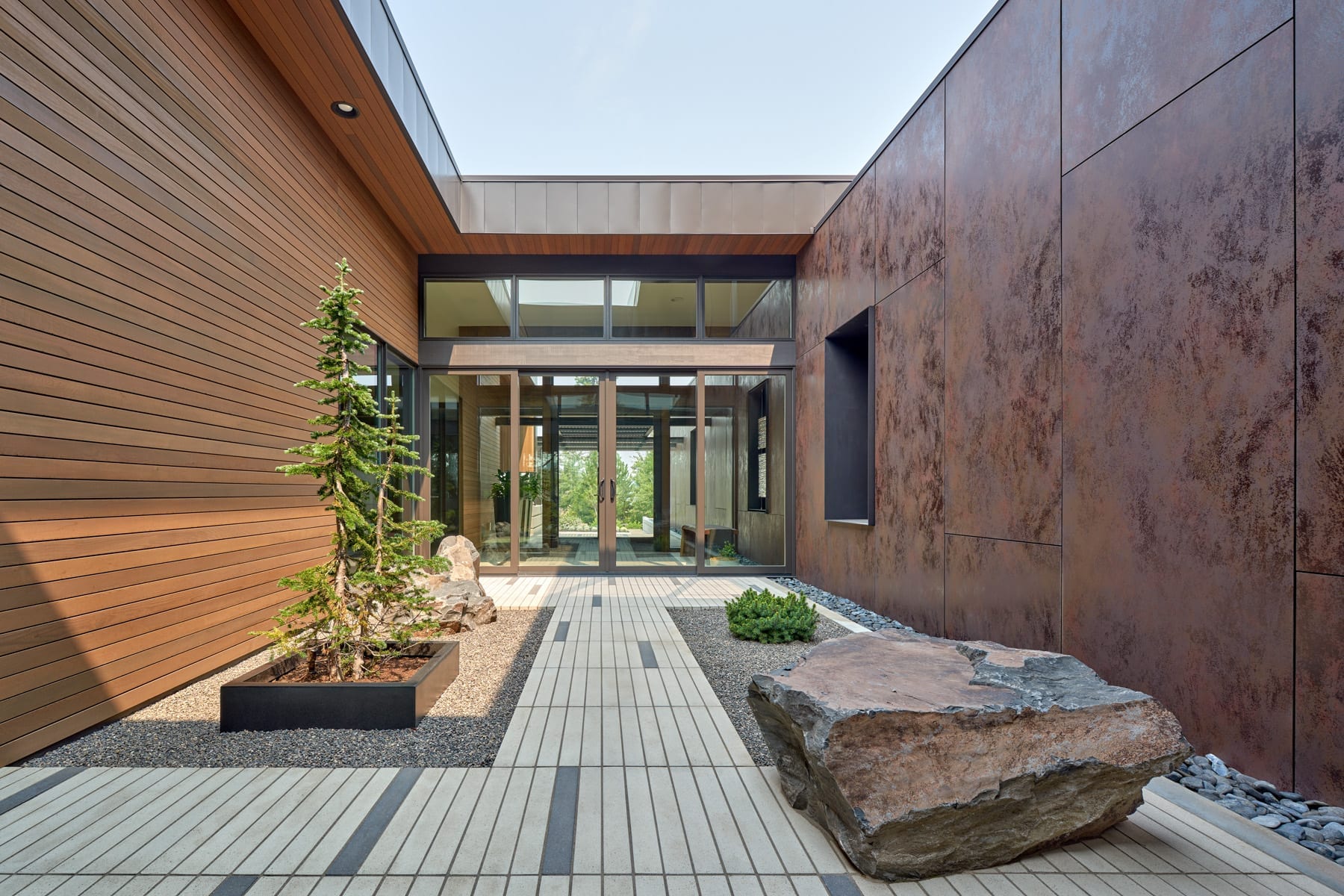 The courtyard also contributes light to the interior of the home, as do the many exterior floor-to-ceiling windows. “Coming from Seattle, we really wanted the light,” said Mary. Large white tiles comprise the flooring, which incorporates a radiant heat system. Quartz countertops are also in light colors. The natural stone of the living room’s expansive fireplace mimics almost exactly the color of the pumice pit, the signature feature of Tetherow’s 17th hole, visible just outdoors. Throughout the home, materials are metal, concrete and ceramic—“all highly durable and low maintenance, yet still with a sense of warmth,” said Meglasson.

A particularly dramatic feature is the interior stairwell. Because Mary wanted the home to be “transparent,” with few visual barriers, a unique approach was necessary for the stairwell. Cables were strung ceiling to floor, with enough tension to support the stairs. The eye passes through the cables to reveal views of the courtyard. “It was quite a challenge to string, but the result is dramatic,” said Meglasson. “It has a veil effect depending on how light falls on it.”

Throughout the home, simple but highly functional features dominate. Mary credits her husband Greg—who has a graphic design degree and worked in design for Boeing—with the vision for many of these design concepts. The flat screen television rises from a built in cabinet and can swivel to be kitchen-facing or living room-facing. Closets along the main hallway are nearly invisible, behind a seamless line of wood paneling opened by the touch of a hand. Along that stretch is a powder room, also all but hidden behind continuous paneling. In a bedroom closet, a full-length mirror is installed on a mechanism which allows it to be unfolded from within. A table is similarly unfolded from a wall panel. “I’m much more traditional, but I came to appreciate his aesthetic,” said Mary. 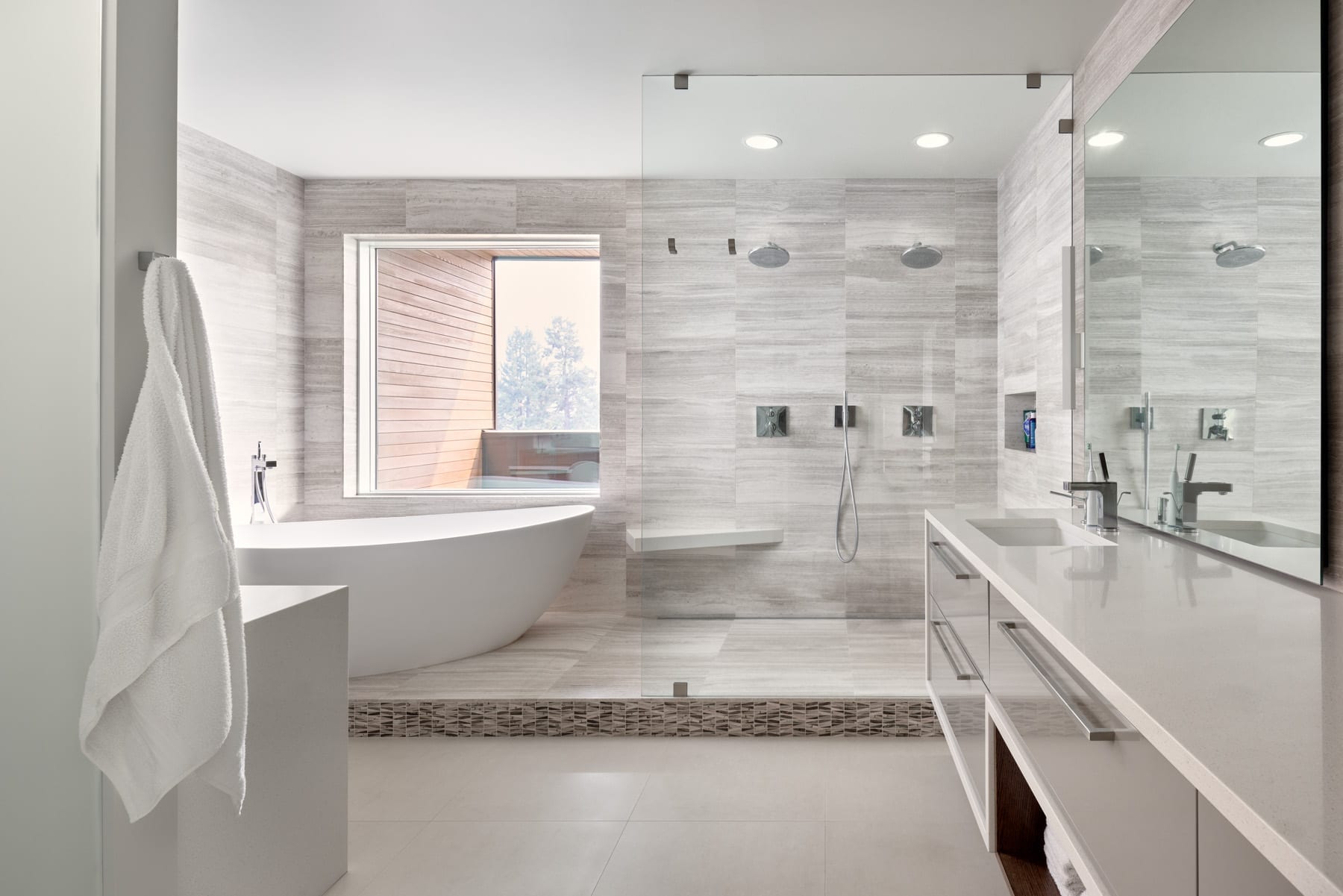 The home has two master bedrooms, one upstairs and one down. Currently, Greg’s mother resides downstairs. But the couple envisions a time when they will move to the main floor themselves. Two other rooms are flexible—one mainly an office, but easily converted to a temporary bedroom. The other an art/yoga studio which functions as a guest room as well.

The exterior landscape was important to Mary. Each side of the house offers a slightly different view. “I like a continuous hardscape, so that you can walk all the way around the house without your feet getting yucky.” Natural landscaping includes manzanita and bunchgrass. A few old snags invite visits from great horned owls and hummingbirds. A water feature and various seating arrangements expand the livability of the home.

In the twelve years since the Nobles purchased their lot, much has changed in the Tetherow landscape. The economy is strong again, and many homes have been built around the Noble house. But that’s okay with Mary and Greg. Aside from proximity to Mt. Bachelor and views of the Cascade Range, one priority for them when they were deciding where to live was that that be around other people. “Coming from Seattle, we knew no one in Bend,” said Greg. “We wanted to live in a community. This is just perfect for us.”