You are here: Home / Culture / A Storied Suitcase Finds Its Way Home

In the hands of its rightful heir, an orphaned suitcase shines a light on a dark chapter in Oregon’s history. 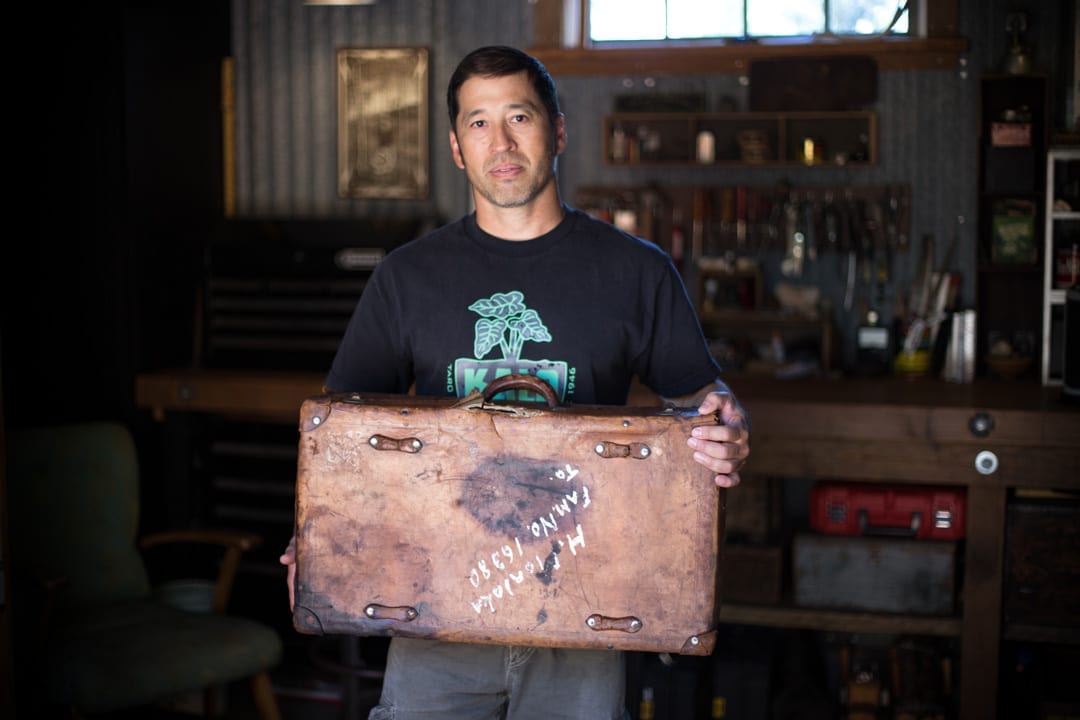 Eric Ballinger ran his hand along the battered brown leather suitcase, and paused when he came to the number “#16380” emblazoned on the smooth leather. He traced the numbers with his finger. “This was my great-grandfather Hidehiko Morioka’s suitcase,” explained Ballinger, as he recalled the emotional upheaval and toil that this small suitcase symbolizes for the family.

“When Executive Order 9066 was signed by President Franklin D. Roosevelt in 1942, it essentially rounded up Japanese families living here and sent them to internment camps, in the most remote parts of the United States,” he said. “People, families were reduced to mere numbers.”

How this symbolic suitcase was retrieved is almost miraculous, according to Ballinger, who is a fourth generation Oregonian of Japanese descent living in Bend with his wife and young daughter.

Historical writer and artist Jane Comerford found the suitcase by a dumpster on Killingsworth Street in Portland and felt it was more than just a battered piece of garbage. Seeing the inscription “H. Morioka #16380,” she instinctively picked up the discarded old leather valise and drove it to Oregon Nikkei Legacy Center, a museum interpreting Japanese American experiences in the 1940s, in downtown Portland.

One of the curators at the museum had recently met Ballinger at a “Day of Remembrance” discussion on Japanese internment at the Deschutes Public Library and recognized the Morioka family name. The curator, Todd Mayfield, was able to contact Ballinger and reunite the suitcase with the descendent of Hidehiko Morioka.

“The suitcase is a story of immigration, civil rights, racism, perseverance and great sadness,” explained Ballinger, glancing at the suitcase and the journey it has taken to finally end up in his possession. “It is a reminder of the incredible sacrifice that my family went through to be here in this country. It survived as a reminder of the struggle for freedom.” 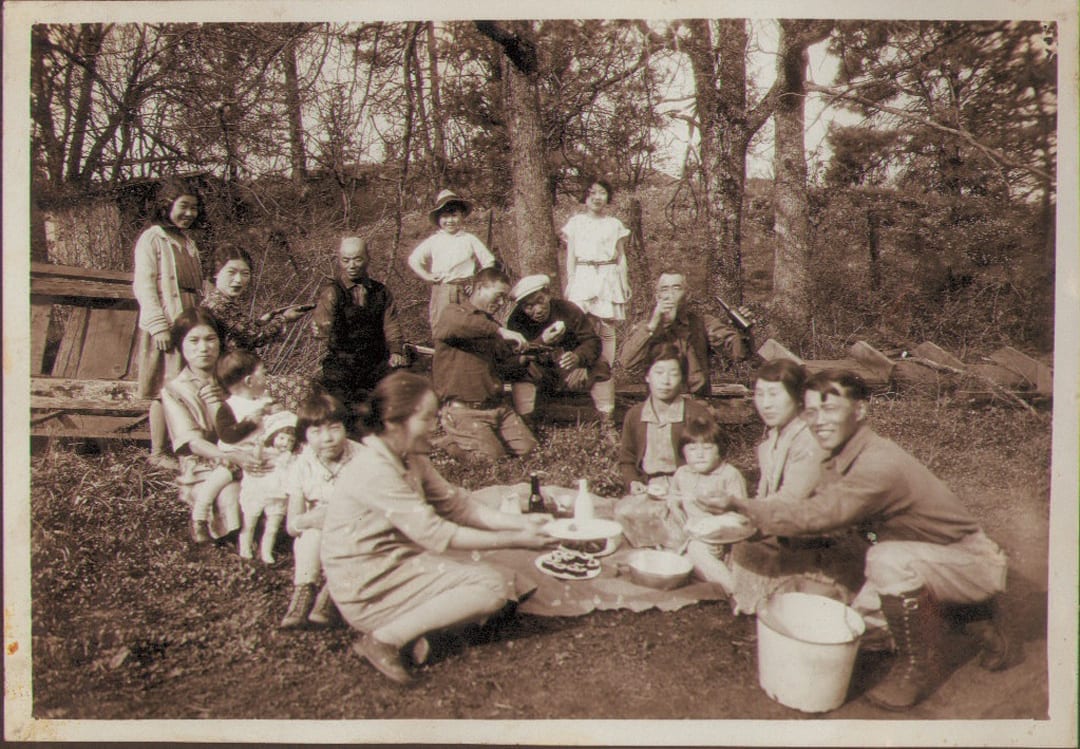 The Morioka Family picnics in the Columbia River Gorge area.

The Morioka family had been farmers in the Hood River and The Dalles area. They sent their fruits and vegetables to market in Portland every weekend. Ballinger said the Morioka family assimilated into the American way of life, and to prove it, he shows a black and white photo where his grandmother is wearing bobby socks and oxford shoes, as the family picnics along the Columbia River Gorge with Mount Hood in the background.

“They looked like any other American kids,” said Ballinger with a laugh. “My grandmother even played basketball in high school.”

In the wake of the bombing of Pearl Harbor on December 7, 1941, paranoia and fear began to set in, and bigotry started to show. Japanese Americans were treated with skepticism and hostility by neighbors once considered friends. When Executive Order 9066 was issued, Japanese families had only six days to pack up what they could muster. They left empty homes, jobs and dreams.

“My grandmother told me you could only take what you could carry, and I think the weight limit was seventy pounds,” explained Ballinger. “So many people lost everything. They left behind houses, farms, equipment and furniture. Things they could sell were sold for the fraction of what they were worth.”

Ballinger said his grandfather, Takeshi “Harry” Morioka, was a newlywed during the years of his family’s internment at Tule Lake, the largest internment camp in the country, on the California-Oregon border. He promptly volunteered for the United States Army and became a much sought after translator in the Military Intelligence Service.

Morioka was later given, posthumously, the Congressional Gold Medal for his service, which Ballinger and his mother proudly received in his honor in Washington D.C. in 2011. 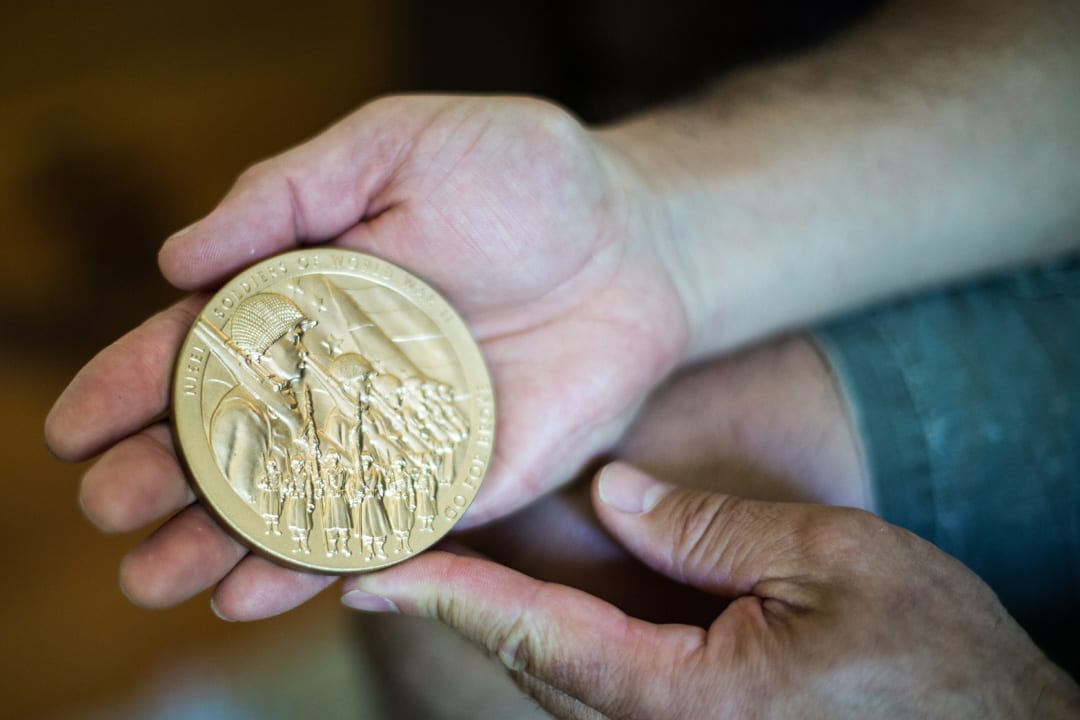 Ballinger holds the Congressional Gold Medal awarded to his great-grandfather for his service in World War II.

“Even after the war, when they came back to Oregon, my great Uncle Shig said there was blatant racism in Hood River. There was a full-page ad in the newspaper that read, ‘So Sorry, Japs not wanted in Hood River,’” said Ballinger. “In 1944, the American Legion in Hood River had removed sixteen names of Japanese American soldiers from its Wall of Honor despite their sacrifices for our country. It was a pretty hostile environment.”

It’s a pain that has spanned generations. Ballinger noted that his mother didn’t learn of her family’s internment until she was in high school.

“No one in the Japanese American community ever spoke of this topic. It was painful, embarrassing and dishonoring,” said Ballinger.

Since the suitcase was saved, Ballinger felt compelled to tell his family’s story in Oregon. It has been part of the 4th/5th grade storyline on Japanese American Internment at Bend’s Kenwood Elementary School and was on display this past summer at the High Desert Museum’s exhibit on World War II.

Recently, Ballinger told his story at Central Oregon Community College, and he hoped to continue to share this family history that is sometimes forgotten in American history.

“The suitcase is helping to tell a story that my grandparents had a hard time sharing. In fact, they didn’t really tell us anything until they were in their eighties,” said Ballinger. “The suitcase was packed with dreams, pride, uncertainty and hope. I think it’s important to tell this history, where U.S. citizens were denied their freedoms and stripped of their civil rights—it’s especially important now.”