You are here: Home / Adventure / Bend Couple Biked 18,000 Miles From Alaska to Argentina

It wasn’t the legendary ice road highway in Alaska, or the persistent deluge of the Oregon Coast. It wasn’t the dengue fever or the dog attack in Peru. In the end it was the wind. The cursed, never-ending wind that almost broke Kristen and Ville Jokinen. The pair were riding the final leg of an unprecedented transcontinental bike odyssey when the wind started pummeling the desolate Patagonia plateau. 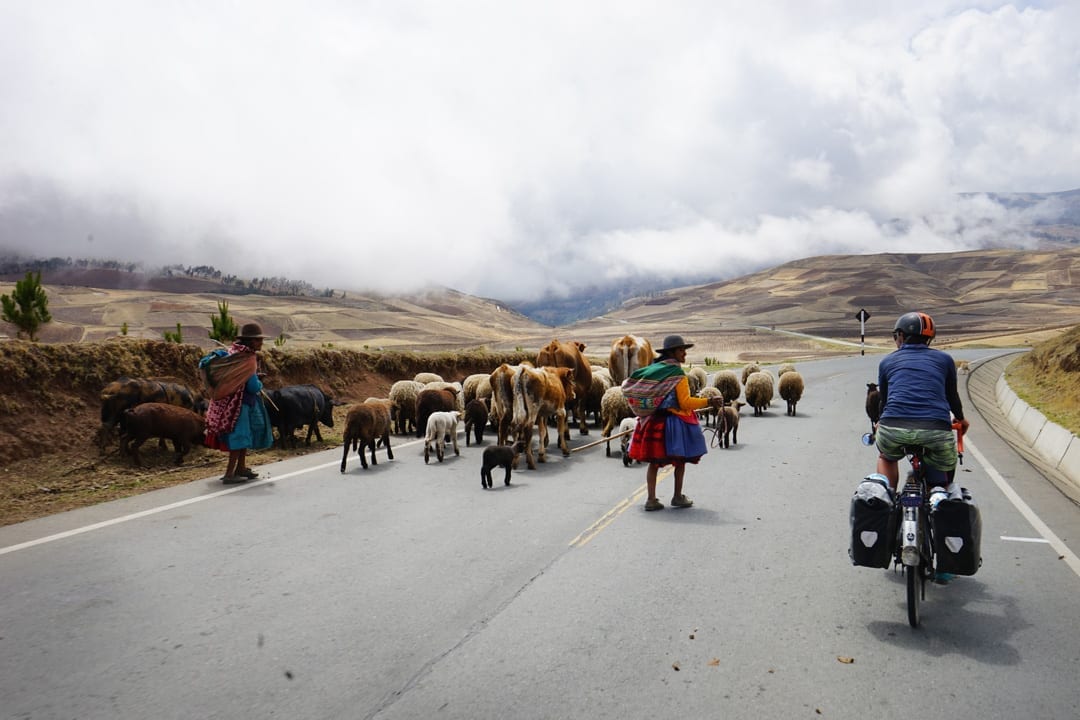 Traffic jam in the highlands of Peru.

The Jokinens had left Bend in June 2016, more than a year earlier, on a journey that began on the edge of the Arctic Circle in Alaska’s Prudhoe Bay. The goal was to make it to the tip of Patagonia, the southernmost part of the American continents. The journey had taken them through a dozen countries. They had crossed the Andes six times in Peru just for the scenery. They’d be damned if they were going to let something as simple as wind stop them short. So they took turns grinding against the neverending gusts.

The persistence paid off. In February this year, the two rode together down the final stretch of road at Bahia Lapataia in Argentina’s Tierra del Fuego. They gazed out at the expanse of the sea and shared an embrace. An improbable journey had been ridden to its conclusion.

“We knew that nothing short of a serious injury was going to stop us because we are both so stubborn,” Kristen said.

Eight months later Kristen, a Bend native who graduated from Mountain View High School, is still readjusting to “normal” life. Traffic, text messages, work meetings. The pair have given numerous presentations about their arduous journey to students and civic groups. Kristin, 37, is working on a book and Ville, her husband of seven years, is editing hours of footage, some of which has already been shared on the couple’s fittingly titled blog, We Lost the Map.

Given just the basic outline of the Jokinen’s story, the first question that comes to mind is “why?” But the more you hear about their epic journey, the more pictures you see, the more snippets you gather of their simple sustained existence, the answer becomes obvious. They did it because they could. Like Sir Edmund Hillary, they climbed the mountain because it was there. 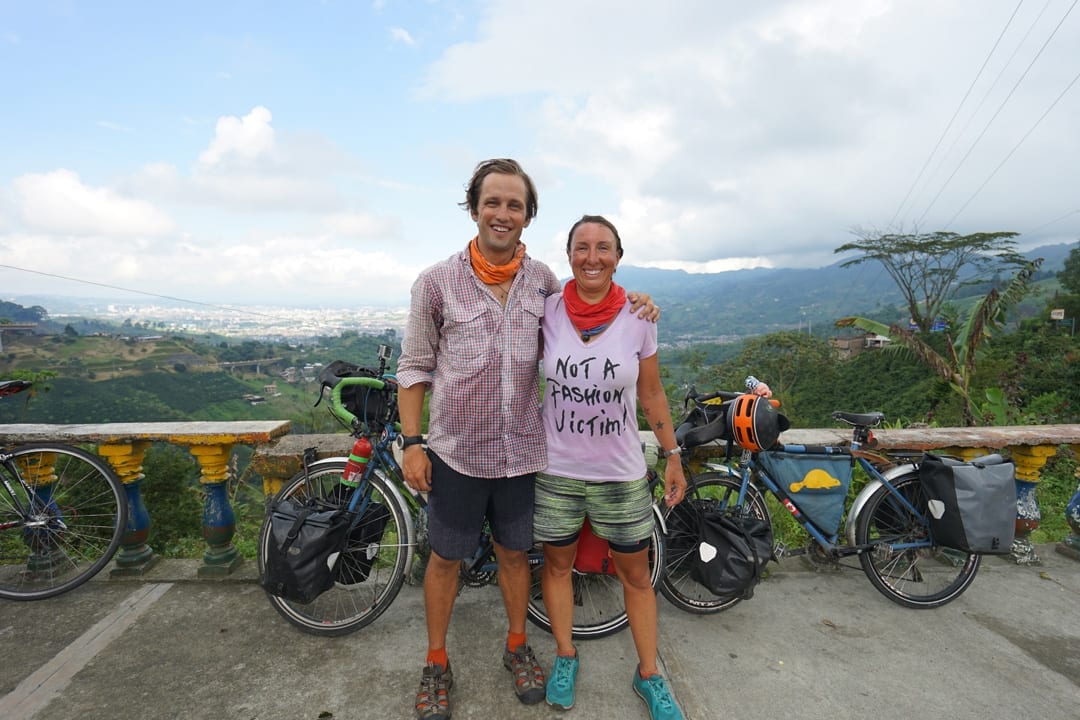 Ville and Kristen Jokinen in hot and humid Colombia.

The narrative also makes perfect sense when you consider the context. The pair met on a boat in Vietnam, diving in the Asian sea. Their courtship included numerous trips across the Atlantic when Kristin was living in Bend and Ville, a Finland native, was living in Helsinki. It culminated in the mother of all hikes, the Pacific Crest Trail, which started on the Mexican border and ended at the Canadian border with an engagement proposal in 2011.

It was shortly after that epic trek that the two started contemplating the idea of a bike tour. That idea grew from a flicker of a notion into a full-fledged odyssey when the couple, in the middle of an exhausting home remodel in Bend, decided to pull the plug—on everything. Armed with cursory research by Ville and a passing familiarity with their newly acquired bikes, they set off for Alaska in June 2016 with a backpacking tent, a few camping supplies and a monthly food and entertainment budget of $800.

Given the obstacles, it’s somewhat of a miracle that they completed the ride. They relied on their gear, their wits, luck and sometimes strangers willing to help a pair of gringos far from home.

“We relied so much on other people because we didn’t have money. We had a tent. We’d have to ask if it was safe to camp and [take certain] routes since we didn’t always know which way to go. We didn’t have GPS,” said Kristen.

On February 17, the pair broke their final camp and rode thirty miles to Ushuaia, the southernmost outpost of civilization on the American continent and the launching point for Antarctica-bound cruise ships. It was their logical stopping point, but they weren’t quite done. There were a few more miles of road to be followed. So naturally, they did just that. They bumped their way down a dirt track another fifteen miles where the land gave way to sea. After weeks of nonstop rain and wind, the clouds retreated to reveal blue skies and a sparkling sea. They shared a moment and a few tears. They finished as they began a year-and-a-half earlier, anonymously chasing an impractical dream because they could. 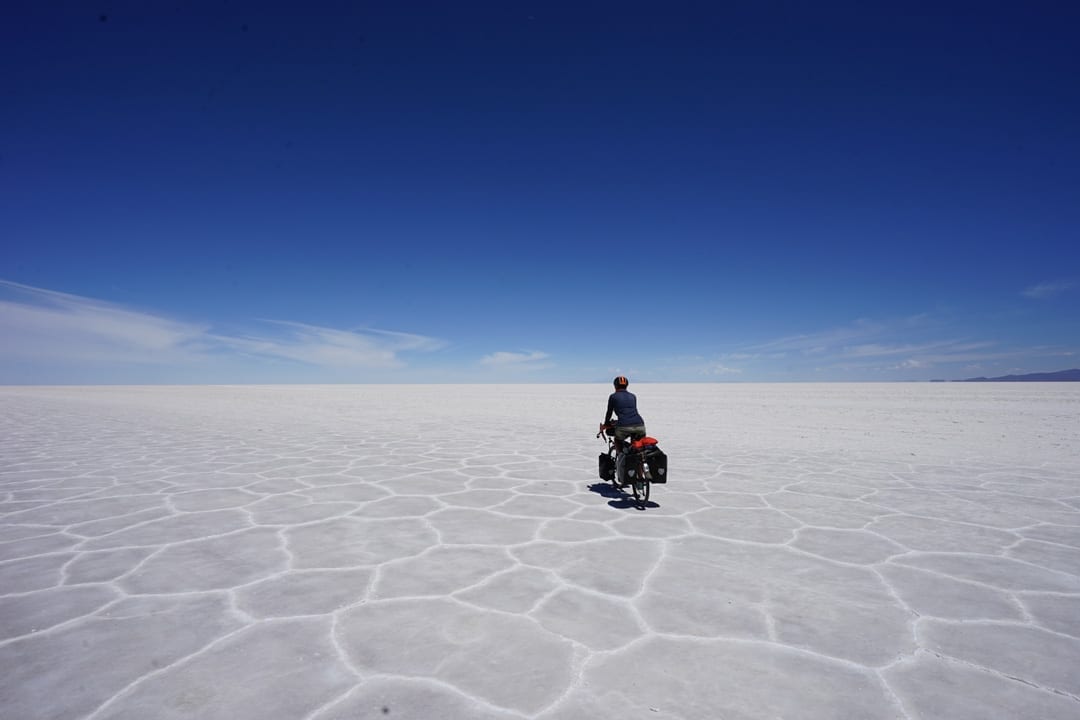 “That’s how we started. No one was there in Prudhoe Bay, just a few oil field workers. No one knew what we were doing but us,” Kristen said.

As the pair lingered, enjoying a bottle of champagne, a bus arrived with a load of tourists and photographers on a National Geographic tour headed to Antarctica. Noticing the pannier bags and touring gear, someone asked where the adventuresome pair had started their journey. When Kristen replied that they had embarked from Alaska, they were given an impromptu ovation. The anonymous bikers were now celebrities.

After eighteen long months on the road, the pair spent several weeks in Buenos Aires indulging in some of the pleasures they had foregone during their bike odyssey. They ate steak and drank wine. They learned to tango. Then it was time to say goodbye.

Kristen is now back at work selling real estate. Ville, a financial analyst in another life, is working at a grocery store. They’ve sorted through the mail and the unanswered email. They finished the remodel that they abandoned for the trip. Kristen is hoping to finish her book about the journey by the end of the year. The newly finished house is already on the market. They’ve decided they don’t need that much space, not when you can live comfortably out of a tent. They only question, where to next?

Share This Article
« Patti Calande Wants to Un-bag Bend
Elena Pressprich Gets to Take Photos of Dogs All Day, Every Day »