You are here: Home / Culture / Community / Bend musician Travis Ehrenstrom is writing a song for every state

Two months and a thousand miles from Oregon, Travis Ehrenstrom and his wife Courtney Bruguier leaned against the front grill of their RV and stared at the dark green bushes contrasting the bright red rocks of Colorado’s Mesa Verde National Park. As the wind blew steadily out of the canyon and through the vista parking area, the weary travelers came to a realization: the RV life was more than just driving lonely highways, hiking far off trails and drinking craft beers. Though this epiphany had snuck up on them, the pair had officially accepted a road warrior lifestyle in tune with those who traveled alongside them and, in this case, the ancestral pueblo people who had walked this very place 4,000 years before them. “Learning about the history of our country and the land before we were even a country was extremely fulfilling,” explained a nostalgic Ehrenstrom. “Each day’s new experiences made each month seem like a year.” 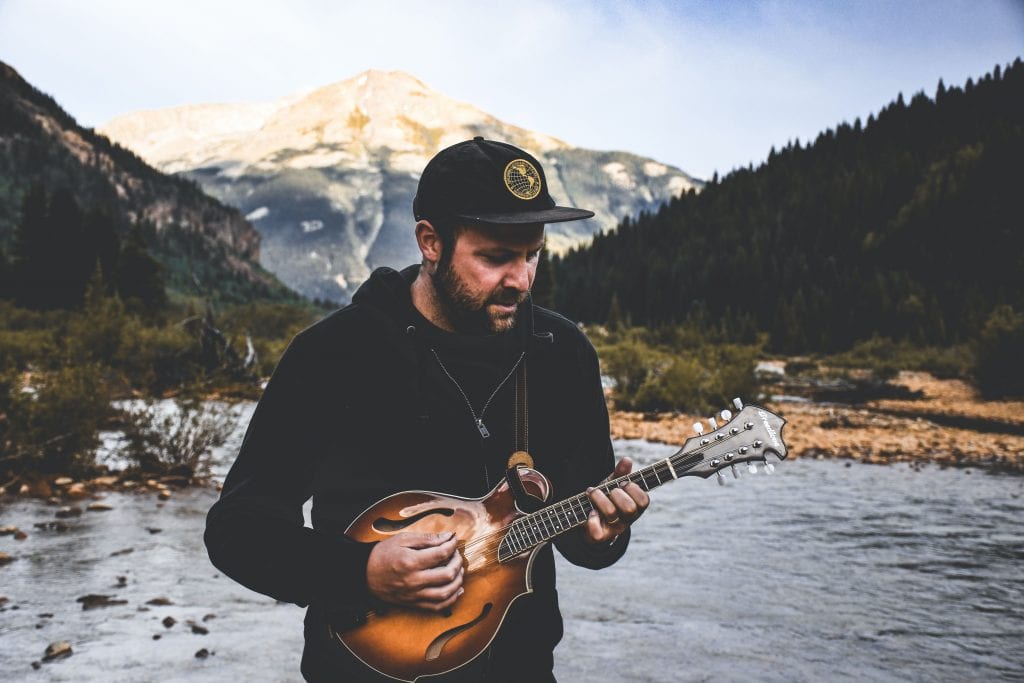 In April of 2019, Pacific Northwest singer-songwriter Ehrenstrom left the comfortable confines of his Bend, Oregon, life to find the common attributes of all Americans and translate those discoveries through song. Though he enjoyed crafting his Americana sound with his eponymous band back home, he couldn’t escape the desire of truly knowing what it meant to be an American. So, he and his wife traded their home for Rosie, a 2014 Winnebago Trend RV, and boarded their five-ton future with two small dogs and a cat.

Their trip was decidedly the envy of most of his friends, but it was not without a few bumps in the road. The pair had recently turned 30, sold their northeast Bend home, and made up their minds to downsize their belongings to fit in their silver and black embodiment of freedom—the motorhome which Ehrenstrom forgot to plug in to charge the night before they left. 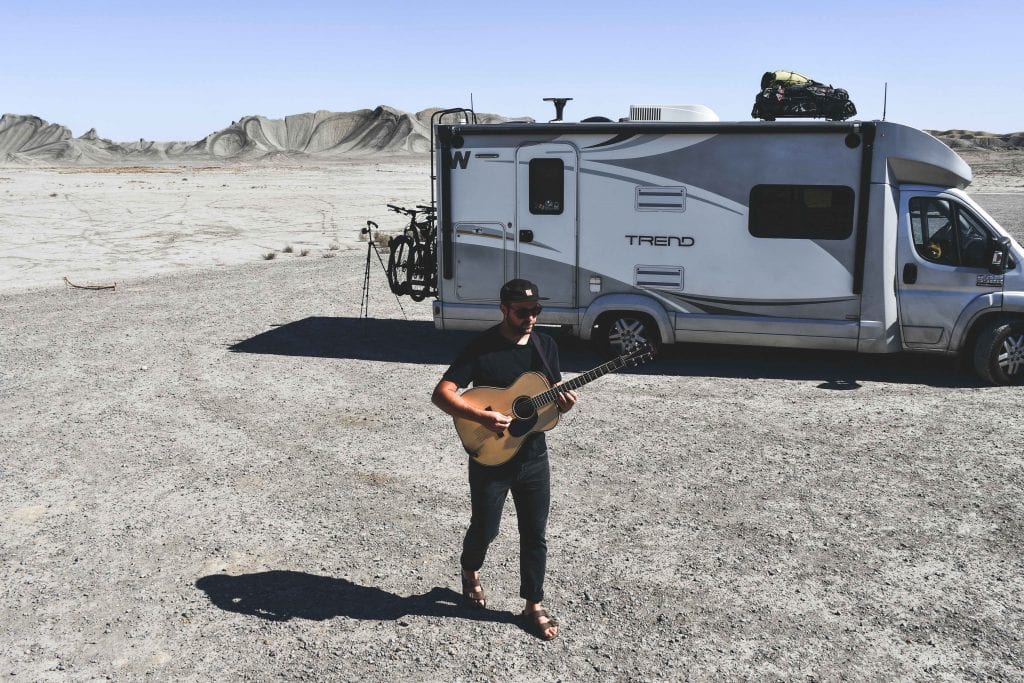 At Capital Reef National Park with Rosie, the RV

Once on the road, life became a little less rocky. Armed with a Cannon OM guitar, a Breedlove mandolin, a 12-key midi keyboard and small recording workstation, Ehrenstrom got to work in chronicling the country through writing a song for each visited state, or “Our Creative States,” as the project is known.

“As the journey progressed, I became aware that these songs were evolving into not only snapshots of other people in other lands, but reflections of myself in these places,” Ehrenstrom said.

By criss-crossing the country, Ehrenstrom absorbed America’s stories and weaved them into his songs’ lyrics and melodies. While traversing up and down California’s Pacific coastline, he wrote in the song “Bombay Beach Club,” “freedom is a funny thing, the more you lose the more you gain.”

Some experiences—such as pickin’ bluegrass mandolin on a North Carolina hillside or late-night Louisiana creole lessons—strengthened Ehrenstrom’s musicianship, while others gave him a deeper understanding of our country’s history that is sure to surface in his songwriting for years to come. His journey found him debating immigration policies with folks in West Texas and visiting with the ghosts of blues pioneer Robert Johnson and civil rights icon Medgar Evers in Mississippi. 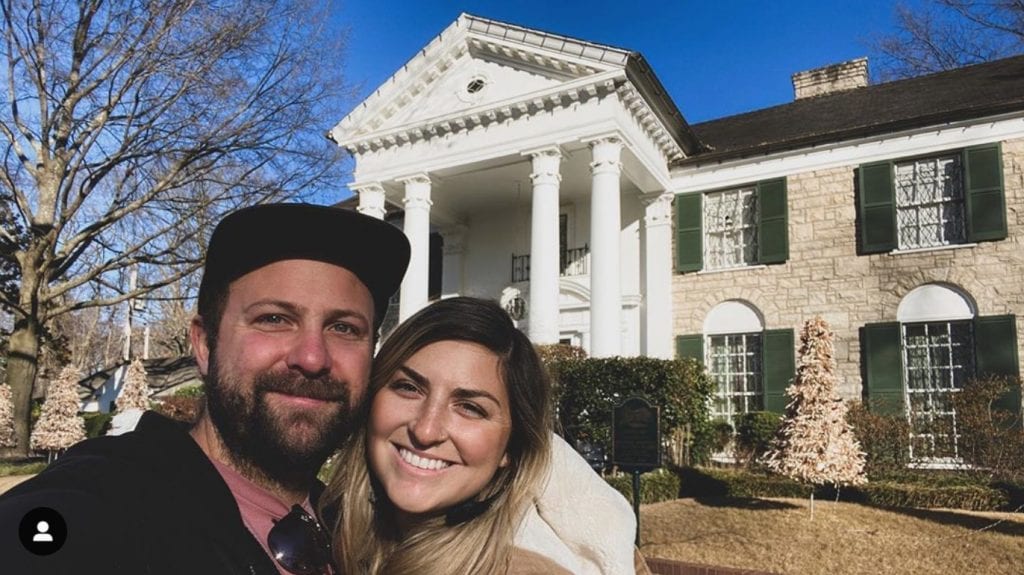 Ehrenstrom and Bruguier at Graceland in Memphis, Tennessee

While walking the hallowed grounds of South Carolina’s Fort Sumter, battle site of the American Civil War’s beginning, Ehrenstrom wrote in “Beginning of the Day,” “in the last of the storm that stands before me, when the scars from a war begin to fade, the only direction isn’t forward, but you know even then it’s to change.”

“Where we are from and where we go shapes us,” explained Ehrenstrom. “Seeing people’s connection to their surroundings reminded me of my own appreciation of Central Oregon’s mountains, lakes and rivers. The journey through this vast country is one that I will be forever grateful to have as a memory.”

After a year on the road, Ehrenstrom and Bruguier cut their travels short to welcome their first child into their family, but plan on visiting the twelve states they missed once the country welcomes travel again. Until then, Ehrenstrom is slowly releasing his songs through his Patreon website and recently created a magazine of song lyrics and photos from the first part of their trip. You can catch the Travis Ehrenstrom Band as well as Ehrenstrom performing solo throughout the Pacific Northwest as live music slowly becomes mainstream again.