When Jamie Nesbitt first moved to Bend from the Bay Area in 2015, he was surprised to discover no LGBTQ+ event at Mt. Bachelor, as he’d seen at other ski resorts over the years. 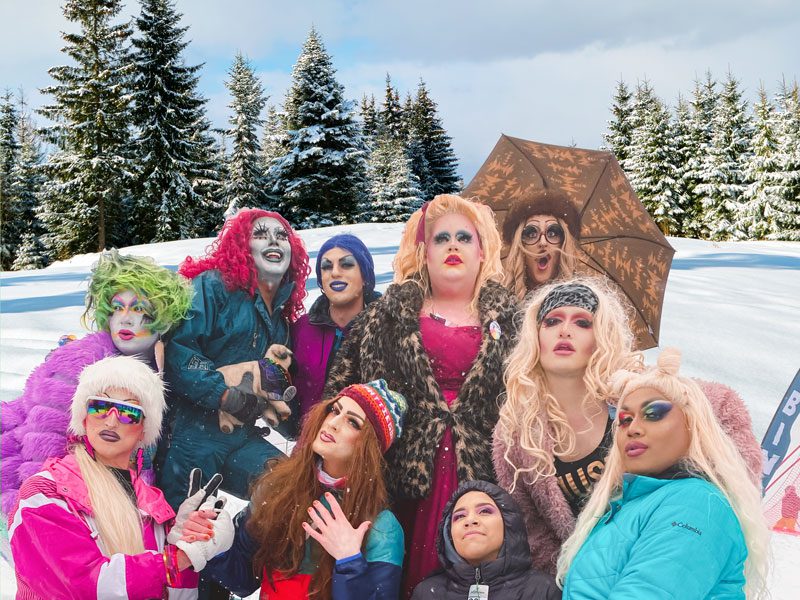 Unlike those who may have idly wondered the same thing, Nesbitt did something about it. Nesbitt, the president and one of the founders of OUT Central Oregon, and his partner reached out to Mt. Bachelor in 2017 to see whether the mountain might support such an event. “I said, ‘We’re not asking for anything, just a rainbow flag and a table,” Nesbitt remembered. “Their response was amazing.”

From that phone call, Winter PrideFest was born. The event started in 2018 with discount lift tickets, $200 of Nesbitt and his partner’s personal money, and a theory—that there was a desire for a visible celebration of the LGBTQ+ community in the great outdoors. Now in its fourth year, the March celebration has garnered thousands of dollars in grant money and grown into a multiday event with a variety of gatherings and parties expected to bring more than 1,200 people to Bend.

“When Jamie first called, his concept of starting a small and welcoming winter event that would celebrate and encourage the participation of the LBGQT+ community within winter sports fit so well with the vibrant, open arms of Bend, Mt. Bachelor, and Oregon outdoors,” said Reese Thedford, Mt. Bachelor’s director of sales. “There was no doubt of the need for such a celebration and that we wanted to be part of its success and growth.”

Turns out, Mt. Bachelor staff had long discussed hosting an event tailored to the gay community but weren’t sure who to contact to get the ball rolling. “That really set a lot of the foundation for OUT Central Oregon’s mission—visibility,” Nesbitt said. “Clearly there are a large number of LGBTQ+ people here, but where are they? So our mission is inclusivity, of course, but it’s also about visibility.” 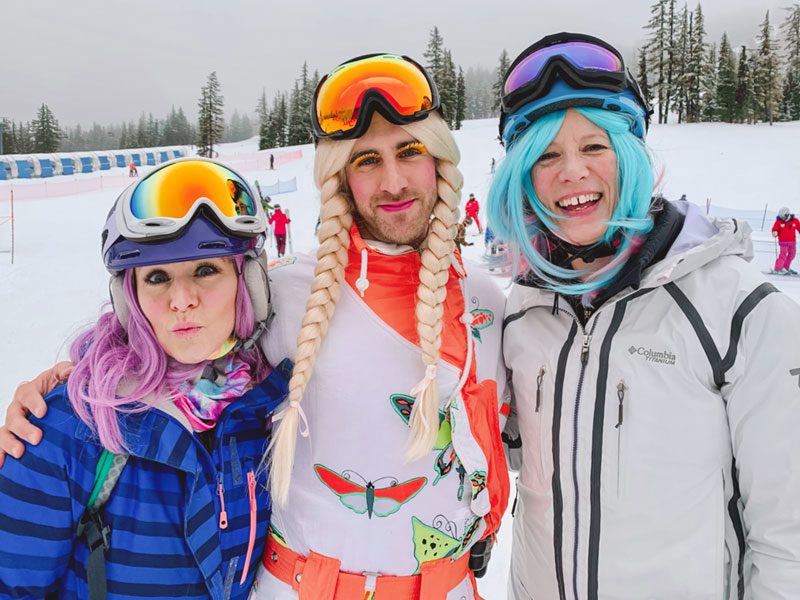 Photo courtesy of out central oregon

In Winter PrideFest’s first year, Nesbitt was relieved Mt. Bachelor wouldn’t require the usual 20 people for the group ticket discount. He needn’t have worried—upwards of 150 people showed up. It’s only grown from there.

City Councilor Barb Campbell heard about Winter PrideFest and suggested OUT Central Oregon apply for a grant from the Bend Cultural Tourism Fund. Nesbitt and other group members had two weeks to write it, asked for $10,000, and got every penny. Bend companies have been involved in making the program a success as well. Blackstrap creates custom-designed gaiters for PrideFest participants, Seventh Mountain Resort has been a welcoming host from the start, Silver Moon Brewing and Immersion Brewing have both served as brewery partners, and other bars and businesses around the region have happily partnered with OUT Central Oregon and Winter PrideFest.

In return, the Winter PrideFest has consistently over-delivered on just how popular its events will be. In 2019, Nesbitt said he expected about 300 people at Immersion for the opening event—and 450 crowded the brewery.

The cultural grants have allowed OUT Central Oregon to get the word out about the event, and to expand its offerings. In addition to skiing at Mt. Bachelor, other events include Wigs, an ice-skating event at Seventh Mountain Resort, as well as dance parties, Sunday brunches, movie screenings, a drag tubing event and a panel on LGBTQ+ visibility in athletics.

Among those OUT Central Oregon asked to be on the panel was Wyn Wiley, an environmentalist drag queen who uses the drag name Pattie Gonia and who aims for inclusivity and equity in the outdoors. “For the queer community, the traditional narrative is to run to big cities for acceptance, when really there’s a lot of beauty in going in the other direction and running into the forest,” Pattie Gonia said. “But the truth of the matter is, a lot of queer people don’t feel safe outdoors. It’s a very cis, white, straight-dominated space with a lot of homophobic people in it.” 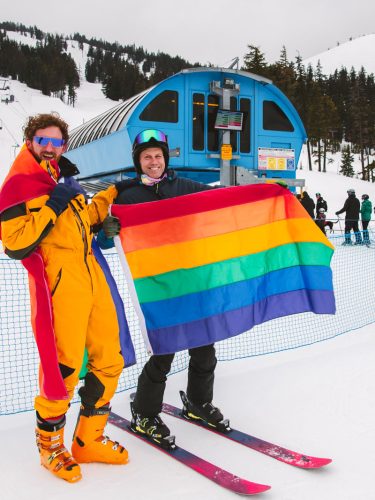 Their trip to Winter PrideFest was illuminating. “I was literally like, ‘I have never heard of Bend, Oregon in my life. What is this?’ But I’m all about it. I love queer people in rural spaces and mountain towns, so let’s do this.”

Pattie Gonia liked Bend so much, in fact, that she moved here in March 2021. And now that she’s here, she wants to see some big moves from Bendites. “My critique of Bend then and now is that it is a place that needs to embrace equity, embrace diversity every single way,” she said. “It’s so segregated, so lacking in true inclusion work, and we really need to celebrate people and organizations—not just OUT Central Oregon but all the organizations that are working to increase opportunities both in the city and outdoors for marginalized groups, and I think we have a long way to go.”

To that end, Pattie Gonia’s work with Winter PrideFest is not done. And she encourages allies to step up, join in and make Bend a more inclusive, comfortable place for everyone. “Allyship is not a noun, it’s not a title or a badge you get to put on yourself,” she said. “It’s a verb. It requires action, getting uncomfortable, showing up with the capital and resources you have to give. Allies are always welcome. This is not a space that we’re trying to make that is exclusively queer. We want to see you there! Show up at community events like Winter PrideFest. Come out. Show up. You are invited.”

The event in March will be bigger and better than ever, thanks to another marketing grant and an eager public ready for events after 2021’s hiatus. In addition to the ski days at Mt. Bachelor (complete with a DJ spinning on the snow), 2022 Winter PrideFest will again feature a sports panel, as well as ice-skating, a dance party and opening social, small happy hours, movie screenings and other events that celebrate the outdoors, the LGBTQ+ community, and encourage equity and inclusivity. 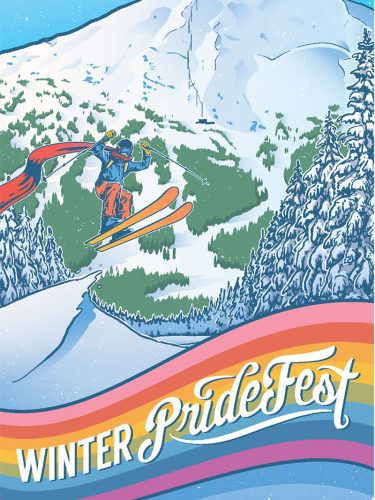 photo courtesy of out central oregon

“We didn’t want it to be a Whistler party, these events that have been around for 20 to 25 years at big mountains. Oftentimes they’re marketed only to men, and they’re just party, party, party,” Nesbitt said, laughing. “A guy in a speedo on the chairlift is not the vibe we want, and it never was.”

What Nesbitt and OUT Central Oregon really want is to practice inclusivity—beyond the LGBTQ+ community to everyone, especially those who are marginalized. They’re putting their money where their mouth is, offering scholarships to Mt. Bachelor’s Ski/Ride in 5 and partnering with organizations like Vámonos Outside (connecting the Latinx community to the outdoors) and The Father’s Group (building community by overcoming racial discrimination) to encourage more inclusion.

“This is for everyone. This is not just for the LGBTQ community,” Nesbitt said. “We are taking pride in beautiful Central Oregon and our mountains, and we feel we’re celebrating all of that with Winter PrideFest.”