Matthew Carter of Carter Knife Co. is on a roll making custom knives in a converted bus east of Bend. 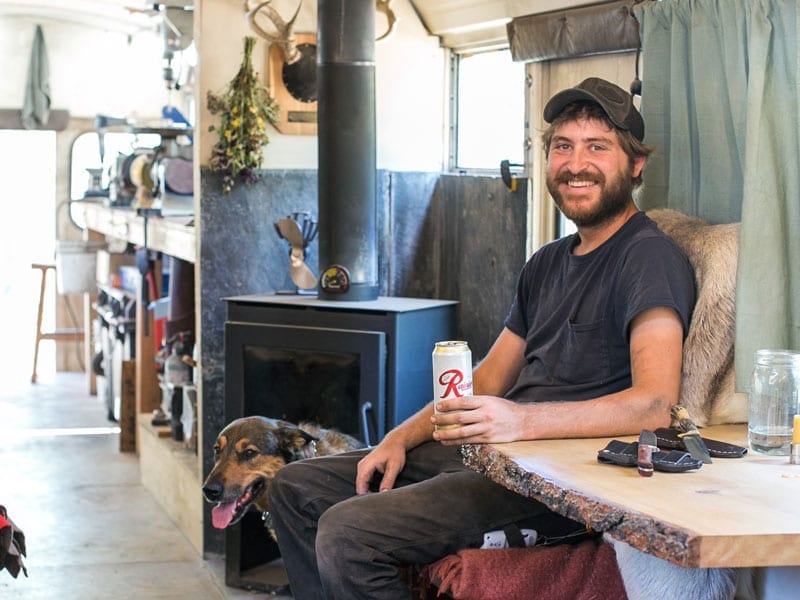 Matthew Carter has a tendency to wander. A native of Ohio and Michigan, he’s traveled across the United States five times. On one of those trips, seven years ago, Carter “stumbled upon Bend.” Officially, he’s lived here ever since, but the open road is always calling, and Carter answers the call as often as possible. It’s only fitting, then, that his home—and his workplace—are on wheels.

A few years ago, Carter bought a cast-off school bus and converted it into a multipurpose space, serving as both home and headquarters of his business, Carter Knife Co. “Upfront is my showroom, the back half is my shop,” he explained. “I wanted to own my shop space, not rent. I wanted to build a home that could go where I want to go.”

For now, the Carter Knife Co. bus is most of the time parked east of Bend off of Highway 20, in the high desert. From its renovated interior, with his dog Roo nearby, Carter creates hand-crafted knives for discerning individuals who seek a truly special knife. Some of what he produces are stock knives which are sold at Spoken Moto and Revolvr Menswear in Bend, to name two locations. But many are custom knives, made to order. 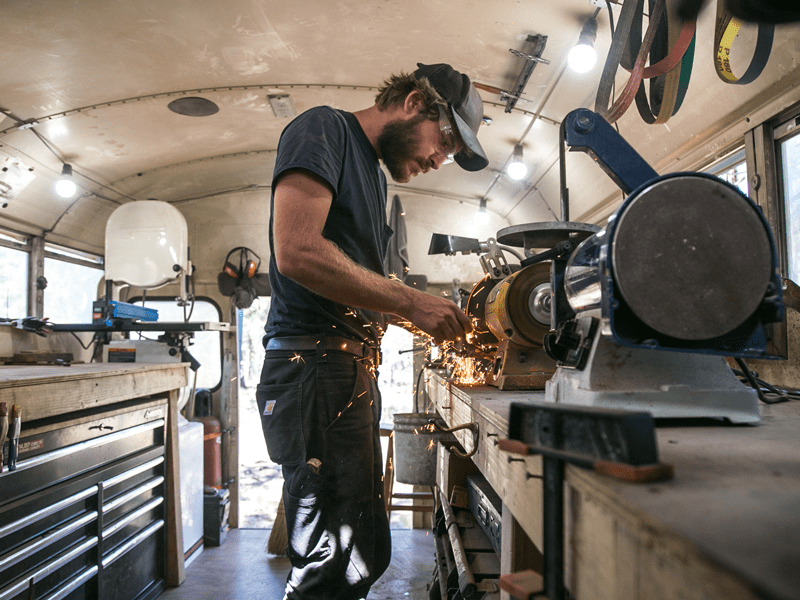 Carter considers the knife’s bevel to be one of the most important and most distinctive parts of any custom knife.

“I’d say about half of my customers want to design a custom knife with me,” he said. “They want to see the shop, meet me. They want to choose the wood, pick out brass or nickel or silver pins. They want a knife specific to their unique uses, and balanced to their own hand.”

Carter’s clients are typically outdoorsy types, from mushroom hunters to backpackers to hunters. “Many are looking for a knife for ‘everyday carry,’ which is a big deal in the knife world.”

Carter came across the trade of custom knife making on one of his cross-country wanderings. Four years ago, he found himself in northern Montana, alone, but never for long. Carter considers himself easygoing and gregarious. “I can talk to anyone,” he said.

Outside of Glacier National Park, he made the acquaintance of a fourth-generation logger—an extremely self-sufficient man of the woods named Ben Quilling, who had built his own home from scratch. Quilling invited Carter over for dinner with his family. After dinner, he asked, “Do you want to see my knife shop?”

Recalled Carter, “His shop was a small hut outside, outfitted with a woodstove and tools.” The next day, over “a 12-hour session that included two cases of quality beer,” Quilling made Carter a knife, showing him the ropes of knife making in the process.

Carter had to get back to Bend, where he was enrolled in OSU Cascades pursuing a social science degree, so his crash course in knife making came to an abrupt halt. But that winter, in-between studying, “I made a cruddy knife after cruddy knife,” said Carter. Eventually, as he improved, someone offered him $100 for a knife he’d made, and Carter Knife Co. was born. 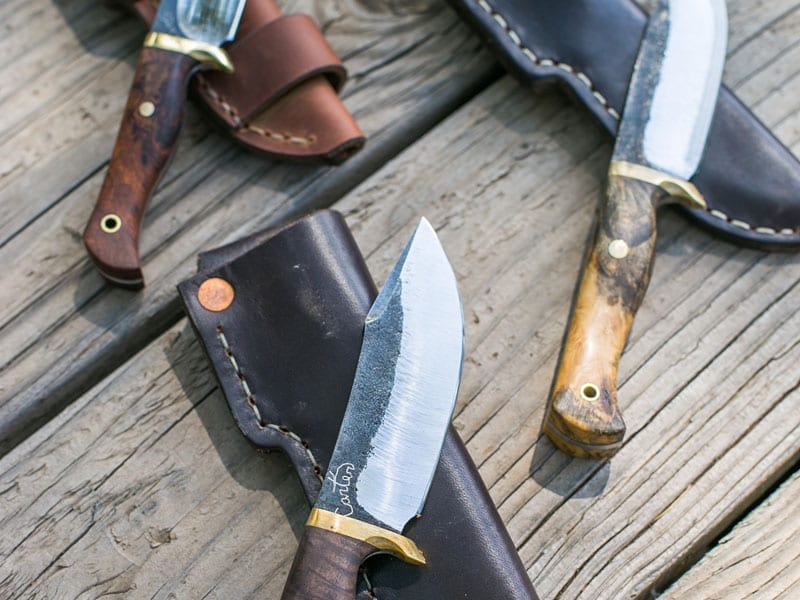 Each knife Carter makes is unique. “I shape by hand. Every piece of the knife is crafted by hand or eye.” The process begins with measuring the knife and shaping the style, profiling the handle to balance with the blade size. Grinding the bevel and hardening the steel are next. “The harder the cutting edge of the steel, the greater the life longevity of the knife.” Carter chooses a wood for the handle from a wide variety, including California buckeye, Honduran ironwood and maple burl, hand sands it, and secures it to the blade with pins. Finally, he crafts a leather sheath just for that knife, doing the hand-stitching himself.

“I love that knife-making is well-rounded,” he said. “I get to work with steel, with many woods, with leather. I get to be creative and do different things.”

Carter works mostly full-time making knives these days, but he also has a side job building custom crates for moving art and glass. “I slow down on knives in the summer, pick up in the winter,” he said. As for whether he and his custom home/shop/bus will stay in Bend, well, Carter just can’t say. After all, the road keeps calling.