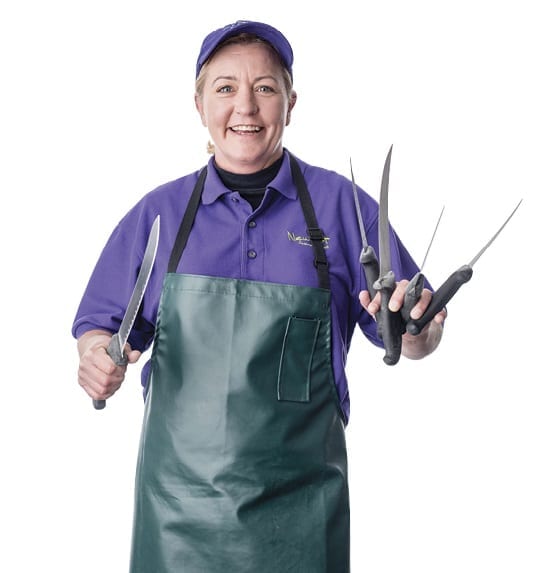 Johanna Wallace, a butcher for twenty-five years, recently took over as the head butcher at Bend’s Newport Market.

Craft butchery has been a top trend in the food world recently, with boutique butcher shops opening in cities such as New York, New Orleans and San Francisco. The latest trend within that trend is female butchers breaking through the well-marbled ceiling. When Bend’s Newport Avenue Market hired Johanna Wallace to run the meat department, however, it was not kowtowing to trends.

Wallace has been a butcher for twenty-five years, having worked her way from the sawdusted ground-floor up. As with most male-dominated jobs, it wasn’t handed to her on a silver platter. She’d been working at the seafood counter at Ray’s Food Place in Brookings, and less experienced men were being promoted to meat-cutting ahead of her.

“I took the initiative and I’d go in on my own time to shadow them,” said Wallace, 49. “I’m 5-foot-3-inches tall … and I had to show them I could handle carrying big, long boxes of whole pork loins of ninety to 100 pounds.”

She learned most of the craft on the job, and moved on, working at Ray’s and Albertsons grocery stores around Central Oregon. At the end of 2015, when Newport Avenue Market was looking for a new manager for its meat department, one of its meat cutters who’d previously worked with Wallace recommended her.

“When someone recommends a person who would be their future boss, that means a lot,” said Randy Yochum, Newport’s director of fresh food.

The biggest question wasn’t one of gender. Rather, it was whether Wallace could successfully transition from a corporate environment to an independent, employee-owned market catering to discerning tastes.

Wallace has embraced her new autonomy. She works with her five-member team to decide what dishes to offer as samples, and she knows the origins of her products. Last spring, she traveled with staff to visit McCormack’s Ranch in Brothers, the fourth-generation family ranch that supplies lean, antibiotic- and hormone-free meat through the Country Natural Beef cooperative. She observed the care given to the cows, the seven types of grasses they eat and the restoration of trout habitat on the ranch’s Bear Creek.

This all prepares Wallace to fulfill the level of service her job requires. Being a woman butcher may be gaining cache as a modern development, but it is not anything new in Wallace’s family. Wallace is the youngest of eleven children, and, at one point, she and six of her sisters were working in the meat industry—despite the fact that their mother was a vegetarian.

Although Wallace has been a role model to her 18-year-old daughter, she doesn’t expect her child will follow in her footsteps. She wants to be a vegetarian, like her grandmother.
“It’s killing me,” said Wallace.