You are here: Home / Culture / Central Oregon Students Stand Up For School Safety

Lauren Hough was traveling around Bend with her classmates doing a singing Valentine program when the news came out about the mass shooting at Stoneman Douglas High School in Parkland, Florida. Though she wouldn’t describe herself as an activist, she had been involved in multiple social activism movements during her time as a student at Bend Senior High School. After the shooting, Hough, a senior, teamed up with students at her school and other student leaders in the region to organize the school walkouts protesting gun violence and the March For Our Lives. Hough talked to Bend Magazine about being a student in the age of mass shootings and what local students are asking of Bend’s and Central Oregon’s leaders. 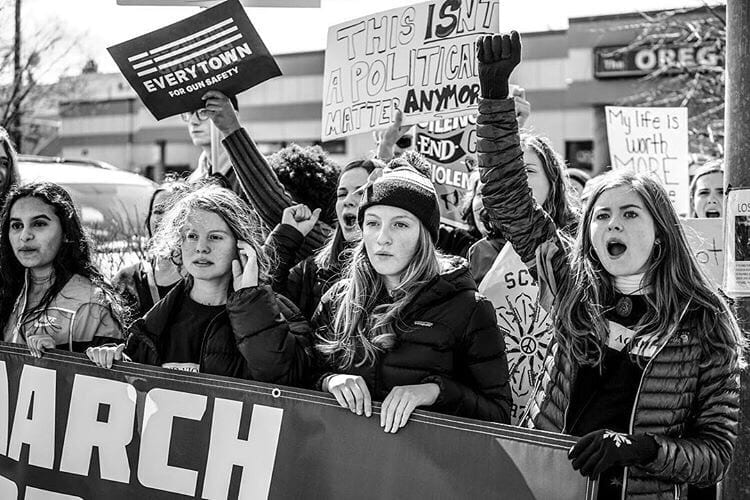 Can you tell me about what the day of the Parkland school shooting was like for you?

When I was in school, we didn’t have those notifications on our phones and we often didn’t hear about the news until we got home. I’m wondering what it’s like to get this news while you’re in school, and unfortunately, in a time when these events are all too common.

It’s overwhelming. I turn off notifications constantly on the news app. I think we just grew up in a generation that’s inundated with constant messaging. It can be a big struggle to turn that off. What actually hit me with the Parkland shooting is that I was driving to school the next morning, and there was an NPR segment about it that had one of the parents of one of the victims talking. I don’t know if it was just NPR magic, but something about that hit me, and I just broke down. I thought, “This is not ok at all. This is heartbreaking.”

After the shooting, there were national and local efforts to talk to students get them engaged in political action. How were you involved in that?

I was involved in a lot of that, and I am still am. For me it started with planning the March For Our Lives. I’m involved in Rise Club, which is a social empowerment, feminist club. I’m close with my teacher who leads that. I reached out to her about what we should do as a club about the shootings. The next day, Vinna, who started the Facebook group, and I met and got a committee started to plan the march. Right now, we’re working on doing candidate endorsement for the primaries, just from the perspective of “What are you doing for school safety and gun legislation.” I’ve gotten to meet a lot of people who are running for office.

Had you been involved in planning anything of this scale or other activism?

I’ve done other activism work. I’ve been involved with the climate action committee in Bend. I used to go to Deschutes Democrats meetings and I’ve spoken in front of city council a few times, so I know a lot of our city councilors. But nothing of this scale of planning two walkouts and a march. It was all very new to me and also at a busy time in my life. For me one of the bigger planning efforts was the walkout on March 14, which I co-planned with Emma Smith.

What goes into planning a walkout, and how did you make it happen?

We joined forces with Summit through the 17 Days of Action and Muse. We collected a group of people to get up and read the victim’s bios. Two girls wrote speeches and performed. It was way bigger than we expected. People are saying half of Bend High walked out. It was raining the day of the walkout, so we met in Bend High’s common area. We had a whole stage set up with microphones. It was huge. It was really impactful because it was my peers. The respect that everyone gave at that moment surpassed anything I could have thought of. Also the support we had from our administration was really surprising to me. They turned out to be incredibly supportive. We were passing out orange pins for our teachers to wear in solidarity, and they had stickers for all of them. Our principal was there to support us and make sure everything got done.

Thinking about social activism in the age of social media, how did you deal with some of the criticism that the 17 Days of Action Instagram page received?

I was co-running that with two other girls from Summit. We all made the decisions for how to handle that. We ended up saying that we were going to be impartial and not respond to the comments. If they are hateful, we’re going to delete them, but if they are just criticism, we aren’t going to censor them. It doesn’t really bother me personally. I’ve had a lot of people fighting back to all of our messages. Especially when people criticise different actions you can take or are criticizing marches or walkouts, a lot of people say, “Well they don’t really do anything. You’re just marching or walking out. What does that actually do?” I believe it sends a message and makes people listen and it brings up the issue. As much as people want to criticize it, they’re not creating their own actions. No action is bad action. It would bother me more if those threats or criticism came from people in person, and they never do. They always come on social media.

What’s next for this movement locally?

Something we’ve been discussing is doing a community dinner. Having as diverse of a group as possible, having people with different viewpoints, sitting together at a table and having a directed conversation. I think for me a lot of takeaway has been that feelings, ideas and intentions are inflated on social media, and it makes the internet and social media not a good environment and not conducive to empathy. That it’s always better to talk to people in person. I want people to talk to me and have a different opinion than me because I want to understand their side as much as I can.

Are you looking for any specific changes in Bend-La Pine Schools?

I think that there are some safety measures that Bend-La Pine Schools needs to take. One that seems fairly simple to me is that the doors should lock from the inside. Most of the doors don’t. Where I draw my line on school safety is that I don’t want schools to feel like prisons. I don’t really believe in having all of the doors locked with one access point. Something I think we really need, and Oregon fails as a state in this, is mental health. It’s related to school shootings, but more about school environments in general. Bend High has one school psychologist and five counselors. It’s been pretty understaffed for awhile. That’s something I discussed as people who are running for office.

What do you want people to know about the work high school students are doing for this movement?

Not to underestimate the power of a high schoolers voice, or anyone’s voice for that matter. One message I’d like to share is how thankful I am for the community support in all this. Bend far surpassed the support that other teenagers have gotten. I feel like my opinions are always really valued when shared, and that’s something that people my age don’t generally get, is validated. A lot of really strong women in particular have been supportive in every way.

How do you keep people and students engaged in this activism while it’s not prevalent in the news cycle?

I think that’s a conversation that the people who are leading this movement still have a lot. One thing I think will always be making a difference is voting. It can be as simple as you show up and vote for people who are going to be there actively trying to change things. Getting younger people registered to vote and out to vote is going to be huge. One of the beauties of this movement is that is got younger students involved who will continue things.