You are here: Home / Culture / Community / The Children’s Museum of Central Oregon Fuses Art and Science 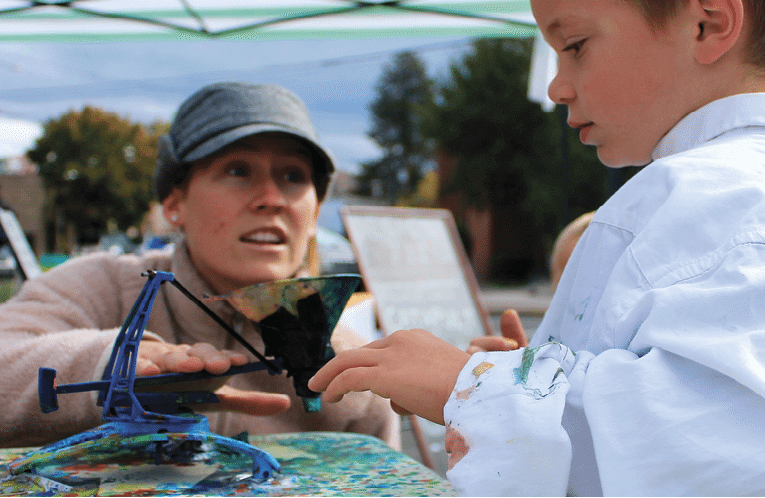 When Kayla Wopschall relocated to Central Oregon from Seattle with her young family three years ago, the scientist and mother of two noticed a glaring omission: an art and science center for kids.

“Currently, a space that’s not your house to engage in hands-on art and science activities is tough to find in our region,” said Wopschall. “Initially I considered launching a discovery center focused on science and technology, but it has become a much larger collaboration with arts and performing arts. That’s what parents are asking for.”

Wopschall’s unusual background as a studio artist and globe-trotting Phd archaeologist specially positioned her to drive the vision that fuses art and science under one roof.

In early 2016, the Children’s Museum of Central Oregon was born. Overseen by an eleven-member board of directors, a $3.5 million capital campaign is currently underway to open and operate a 40,000-square-foot physical space in Bend that would serve as an experiential learning and playing center for kids.

The Museum’s master plan includes two classrooms with lab capabilities and a theater where kids can perform and play dress-up on any given day, which could also be used by organizations such as the Cascade School of Music.

“There’s a real need in Central Oregon for a performance space that feels important and special, ” said Wopschall.

She hopes to have museum doors open as early as December 2017. “We’ve only been fundraising since January 2016, and we’re already well on our way,” she said. “The entire community is so excited and supportive, and I know we can make this happen.”

Parents of youngsters ages four to fourteen don’t have to wait until 2018 to take advantage of CMCO programming. Single and multi-day camps are regularly offered on no-school days, and encompass interests ranging from welding and woodworking to 3-D printing and nature discovery. “We have a 100 percent return rates on our camps,” said Wopschall. “There is always a creative, visual component to them, as well as a strong material and science component.” What’s more, a series of six pop-up museum events are scheduled for locations across Central Oregon this winter. These one-day mini museums are free to attend and include a science and art activity.

Donate to the capital campaign, sign up to volunteer or register for winter camps (ages 4-14). childrensmuseumcentraloregon.org

Like Children’s Museum of Central Oregon on Facebook to stay current on pop-up museum dates and locations.