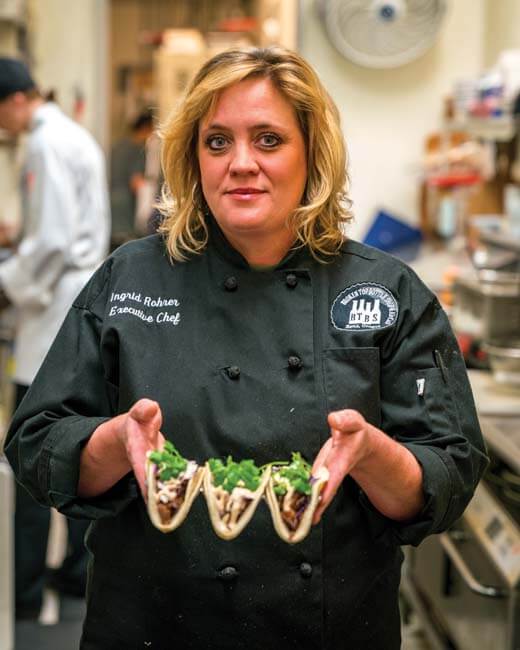 Since 2015, the small kitchen at Broken Top Bottle Shop has been in the hands of Ingrid Rohrer-Downer, a chef with an outsized reputation for versatility and creativity. With extensive experience cooking for large parties as well as diners at upscale restaurants, Rohrer-Downer’s ethnically influenced comfort food complements BTBS’s extensive global beer selection.

“Broken Top is a nice place to step back and prepare ethnic food that translates well,” she said.

That love of ethnic food started when she was a youngster in Fresno where a live-in nanny from Argentina fostered in her an appreciation of seafood. After completing the California Culinary Academy in San Francisco in the early 1990s, Rohrer-Downer spent ten years with Bon Appétit Management Co., which offers on-site food service to businesses, universities and others. She started with the company in Palo Alto and later transferred to Hillsboro where the company contracted with Intel.

At Intel, Rohrer-Downer oversaw Mexican, Indian, Sri Lankan, Thai, Japanese and Colombian chefs who catered to the cravings of Intel’s diverse workforce. “I sucked up as much (culinary) knowledge as possible,” she said of the time spent with chefs, who shared recipes and cooking techniques.

Traditional favorites still populate the BTBS menu—house-smoked baby back ribs, the cheese-stuffed DD Ranch burger and the sesame sushi salad. However, global influences are evident around every corner. For example, the pork belly sandwich is now “the pork belly bahn mi sandwich” with Vietnamese flavor infusing each bite. The cauliflower shawarma sandwich is a burst of exotic flavors.

“I can do high-end food, but people love comfort food,” she said. “The difference is I throw in a twist—some unusual stuff in it,” she said.

With a commitment to organic and locally-grown produce and meats, Rohrer-Downer converts the weekly CSA (community supported agriculture) box into “Thursday’s tacos.”

Located at the foot of Central Oregon Community College on Bend’s westside, BTBS’s ground-level space is beneath apartments, which for safety reasons prevent it from having an open flame, hood or deep fat fryer. All the cooking is done on flat-top induction burners, ovens and outdoor Traeger barbeques. That’s where Rohrer-Downer’s creativity shines through.

“It’s a testament to Ingrid’s skills and ability to put out large quantities of food on busy nights from such a small space,” said Jennifer Powell, who owns the restaurant with her husband, Jason.

“She excels under pressure and succeeds by all measures,” said Jennifer.

A compulsive cook, Rohrer-Downer, 45, says she’s always thinking about food and creative ways of preparing it. “I have a lot of food dreams,” she said, adding that at BTBS she’s able to experiment and enjoys interacting with its regular clientele.

The BTBS menu has always offered vegan, vegetarian and gluten-free soups, salads, sandwiches and entrées along with meaty selections. Rohrer-Downer has been tweaking the menu to reflect her love of various cuisines of the world. The results are evident in every bite.  Explore their menu here: btbsbend.com 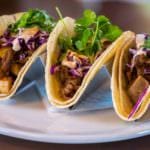 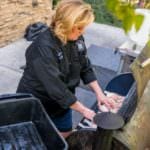 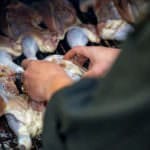 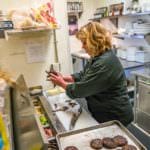 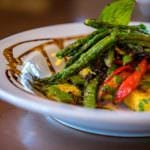 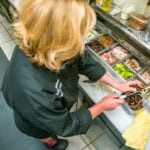 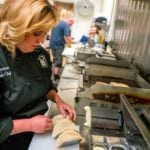 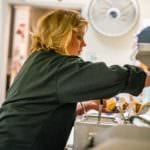 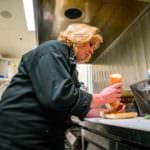 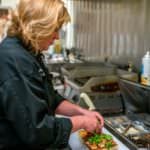 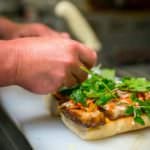 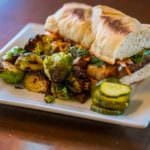 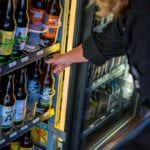 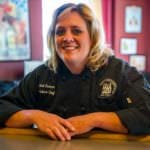