You are here: Home / Culture / A Walking Tour of Historic Downtown Bend

Park the car and take a walking tour of downtown Bend to find historical tidbits, architectural legacies and even a ghost. 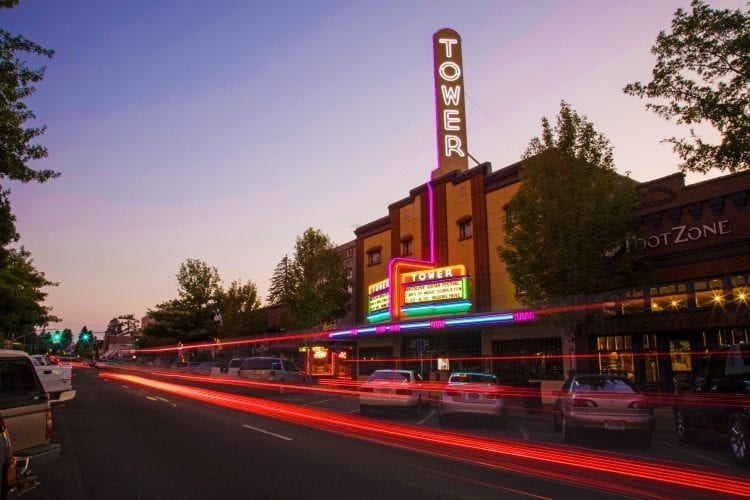 Built in 1909, this is the only remaining original wood frame building from downtown. The Smith family moved into the apartment upstairs, and Marjorie, their daughter, lived there until her 90s. During the devastating fires of the early 1900s, their building survived because Cora Smith hung wet sheets out the windows. All the other wood frame buildings either burned down or were replaced by brick buildings. The first gas tank in Bend was here, and today there is a little square piece of cement in the sidewalk out front that is both unmarked and out of place—that is where the first gas tank was.

The original Bend Hotel on the site was one of many that burned to the ground, so Hugh O’Kane went for all brand-new fire-proof construction in building its replacement in 1917. The other special piece is that he built the Bend Emblem Club logo into the transom windows. The building was home to the original offices for the brand-new county government when it opened, as well as many other important businesses and offices over the years, including the Grand Theater and Cashman’s clothing store.

Built in 1904, this is the oldest standing structure within the city limits. Arthur Goodwillie came to Bend in his early 20s to work for Alexander Drake and at 23 was elected the first mayor of Bend, right after the construction of his home. A makeshift band marched to his house celebrating his election. The town was only about 530 people then, and his was a substantial home with leaded glass windows. The other reason to love the house is that it was almost torn down in the 1990s and the community rallied around it to save it from being torn down to put up a parking lot—literally like the Joni Mitchell song.

This spot is a testament to humanity. Frank was stumping for his presidential candidacy with a speech at Drake Park in 1928. During the speech, he heard a young boy cry for help in the river. He took off his jacket and jumped in, a healthy and strong man in his thirties. This story also shows what we have done to the river—back then it was fast, dangerous and cold. Johns was unable to save the boy and succumbed to the cold water himself and they both drowned. The citizens of Bend pooled their money to get his body back to Portland, as well as to give a small fund to his widow and their two daughters. A couple of years later, citizens of Bend wrote and nominated him for the Carnegie medal for his heroism, which came with a lifetime stipend for his wife. They were successful and he was awarded the medal posthumously. 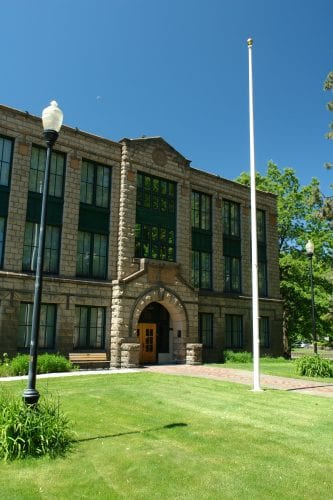 Named for Ruth Reid who came to teach in Bend in 1904, the building was the first modern school built in Bend. Opened in 1914, it had indoor plumbing, heating and electricity. Many of the children that first attended the school did not have indoor plumbing yet. Ruth founded the first high school classes and became first principal of all schools. She had to quit after marrying a local entrepreneur and politician H.J. Overturf, for whom Overturf Butte is named. Reid took her husband’s name, but when Reid School was built, they named it for her by her maiden name. To this day, the building (now home to the Deschutes Historical Museum) is reportedly haunted by the ghost of George Brosterhous, who died of a fall during the building’s construction