You are here: Home / Business / Epic Aircraft is Cleared for Takeoff

Epic Aircraft’s new plane has the Bend company posed for a second chapter.

Every Thursday afternoon, Epic Aircraft employees gather in a showroom hangar for some food and drink. In late January, the crew was also asked to do something a little different during the event: sign their name to an airplane cowling, its hood, and typically one of the last pieces of a plane put in place.

The signatures were at the request of the aircraft’s owner as Epic neared completion of its fifty-fourth and final experimental kit. That plane will mark the end of an era for Epic, which has been designing and manufacturing carbon fiber, high-performance turboprop “kit” planes since 2004.

Today, a new $3.25 million plane currently being assembled at Epic’s Bend headquarters is poised to help the company truly take off. After seven years of design, manufacturing and rigorous testing, the Epic E1000 is set to become the company’s first FAA-certified, fully factory-built aircraft, fulfilling a goal the company had from the beginning.

“It also signals the arrival of a truly game-changing aircraft,” said Epic CEO Doug King. “One that is going to disrupt the aviation industry, setting a new standard for innovation, performance and price. Now that is very exciting.”

Epic’s first five factory-built E1000 aircraft are in production, in various stages of fabrication, bonding and final assembly. They are expected to be delivered to customers later this year.

“We have a large order book of more than eighty airplanes, we just need to start delivering planes, and we intend to do that this summer,” King said. “This is a big year for us.”

From Kit to Complete 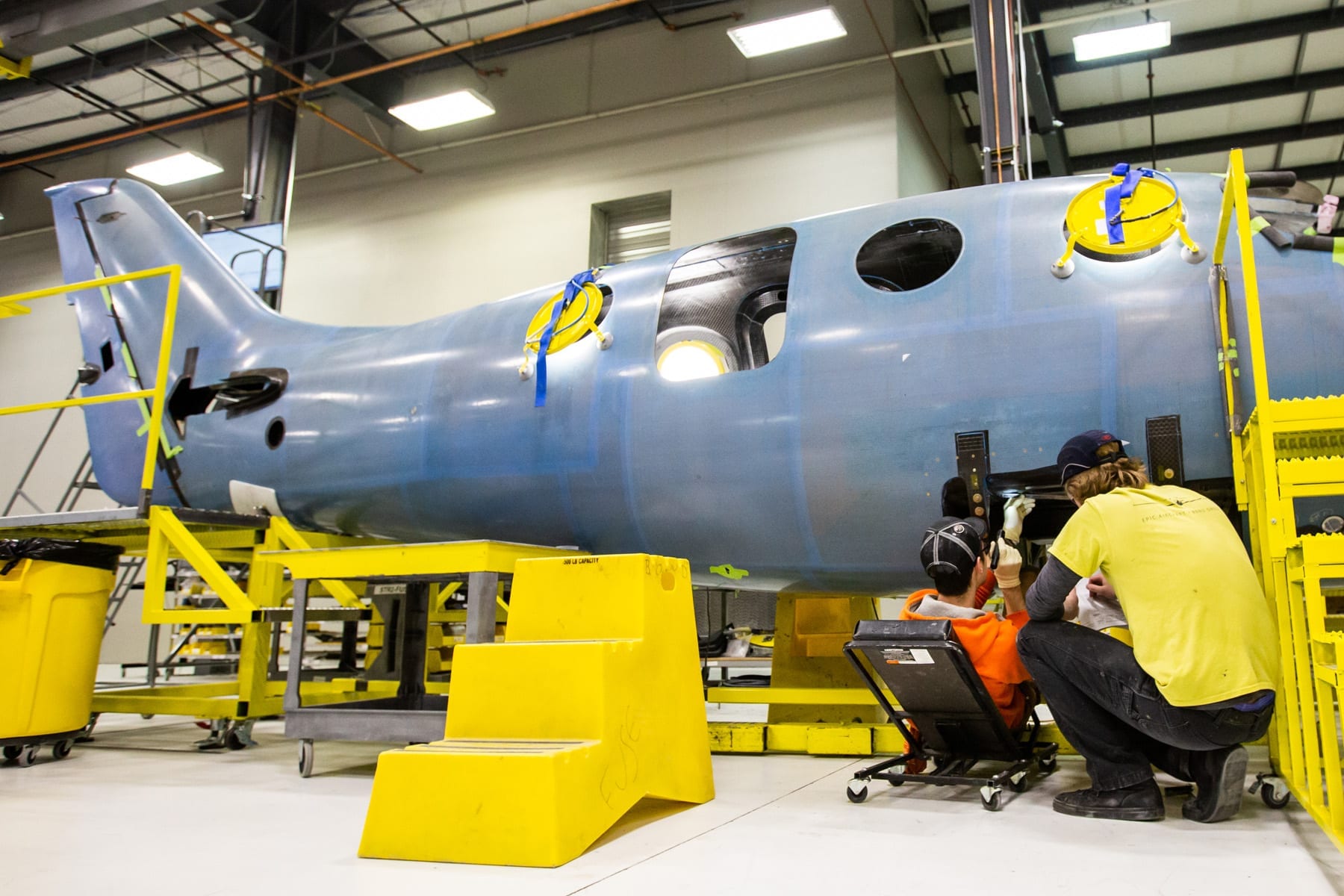 The coveted FAA certification is “a done deal,” said Gale Evans, Epic’s marketing manager. “The only question is exactly when it will be a done deal.”

The experimental kit plane process Epic gained national recognition for involved the company designing and manufacturing the aircraft, but the FAA required customers to build 51 percent of the plane. The process often took several years to complete with customers spending weeks at a time at Epic putting together the planes under close supervision.

The new FAA certificate, expected this summer, allows Epic to design and build the plane from start to finish and ramp up production considerably. Since 2004, just fifty-two planes were sold and built. Epic now expects to build more than fifty planes a year and already has orders from customers in the U.S., Australia, Europe and Russia.

“We’re expanding our market from 10 percent [of the general aviation market] to all of it,” King said. “And instead of requiring a deep personal commitment to the kit-plane process, now all a potential customer has to determine is whether it’s capable enough for them and whether they can afford it.”

King said his customers are folks who run small to mid-sized businesses—construction contractors, developers, doctors or entertainers. They are people who have money and who need to move around quickly. Because of its smaller size, the E1000 is able to land and take off from some of the hundreds of smaller airports situated around the country, an intriguing benefit for many potential customers.

Epic touts the E1000 as cheaper and faster than its competitors. The six-seater can fly from San Francisco to the Mississippi River on a single tank of gas, cruising at 375 miles per hour fully loaded.

“It expands their ability to get around at near airliner speeds at relatively low costs,” King said.

Pia Bergqvist, executive editor at Flying Magazine, has been monitoring Epic and the certification process for years. She flew in one of the test E1000s a few years ago and said, “The performance truly is spectacular” and seconds Epic’s claims that the new plane is much more capable than its rivals.

“Airplanes not only have to perform really well, but they have to be sexy for people to want to buy them,” she said. “It’s a cool looking plane and it has terrific performance. I think it’s going to be a winner once it’s out.” 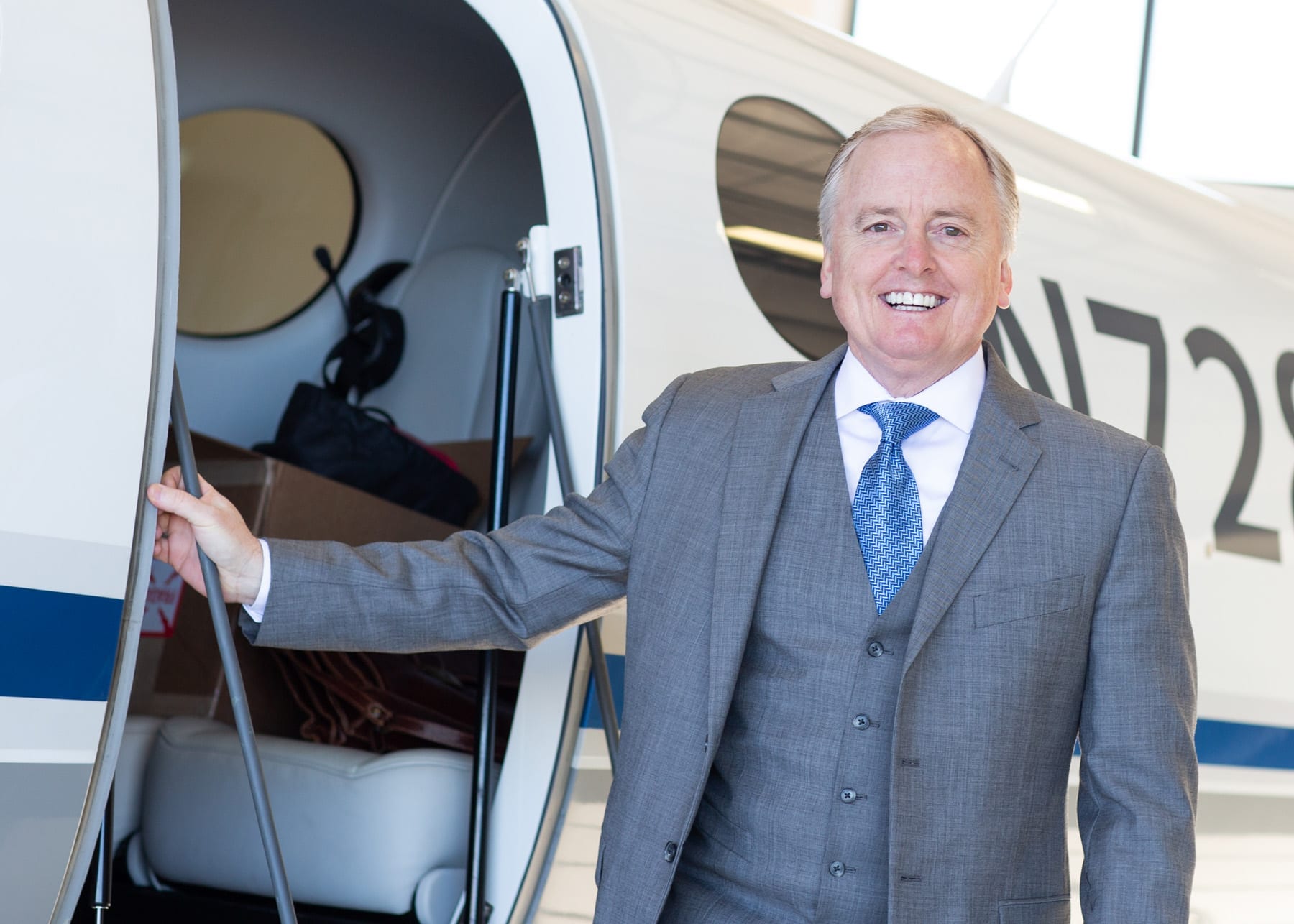 It’s definitely been a long trip for Epic and King. Just ten years ago, King was an Epic customer and in the middle of building his own kit plane when the company went bankrupt, mothballing his project for a while.

A year later, he formed an investment group of kit-plane owners who bought and rescued the company. In 2012 King sold to a private Russian investor, solidifying the company’s financial future and ensuring funding would be in place for FAA certication. King stayed on board as the CEO.

“That was an interesting time and the decision I had to make was, do I walk away from it or do I go all in,” King said. “A lot of people thought I was nuts investing in an airplane company in 2010 [in the midst of the recession]…but the airplane is really a star. I had a chance to do it and it turned one dream into a different dream.”

Epic has reason to be optimistic about the future market for its new plane. There were close to 400 turboprop deliveries through the third quarter of 2018—up nearly six percent from 2017 according to the General Aviation Manufacturers Association. Officials there are bullish about the $12.7 billion industry’s future performance, in part, due to new products set to be introduced.

“The industry is very excited,” Evans said. “The FAA has been supportive of us too. Aviation needs more innovation and we’re offering the market something new, something that will redefine expectations in the industry.”

The projected increase in production means they’ll also need to increase the current workforce at Epic, which already hovers around 250 people. King said Epic could hire as many as 100 new employees in the coming year, to do everything from fabrication to final inspection.

“We’re always hiring here,” King said. “And it’s a good job that someone with or even without a degree can begin a good career in Bend. That’s the biggest reason for our outreach in the area. We’re not trying to find customers here, but we are trying to find employees.”

Epic discontinued its kit plane program in 2013, preparing for the FAA certification. When the final experimental plane is ready, they’ll bring it to the showroom hangar— complete with a giant bow. Evans said they will probably involve the entire Epic staff and give the plane a special send-off, effectively turning the page for the company.

“It’s closing one chapter,” Evans said, “and starting a very exciting next chapter that everyone has their eyes focused on.”