You are here: Home / Business / Epoch Ascent is Bend’s gym for elite athletes

Dewayne Hornbeak launched Epoch Ascent in 2015, bringing his background as a U.S. Marine and his work with the State Department in high-threat protection to creating a sport-specific training facility. Today, Hornbeak trains competitive athletes, tactical athletes such as firefighters and law enforcement professionals and “everyday folks” who just like to push hard. Bend Magazine sat down with him to learn more about elite training, adaptation in the COVID-era and the “mad scientist” part of his work. 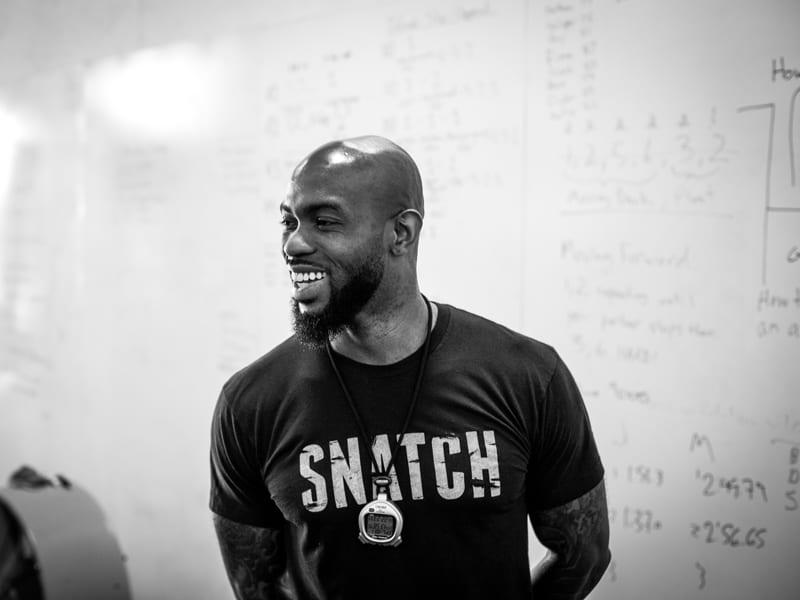 What led you to create Epoch Ascent?

My biggest inspiration has been Gym Jones out of Salt Lake City, Utah, founded by former alpinist Mark Twight, who trained the actors for the 2007 movie “300”. After reading about Twight’s climbing exploits, I developed my own interest in starting a gym with the understanding that it’s not just for people who want to go and do aimless workouts. I wanted to build a facility and training model that was purposeful, planned and sport-specific minus anything that was accidental, random or unnecessary. I set out to develop a training methodology where preparation for outside performance was paramount and closely mirrored various aspects of real life (hardship, integrity, courage, adaptation, failure and perseverance).

Who is your typical client athlete?

The common thread binding my clients is a want; they all want to be immersed in a “no social hour” culture of hard work, calculated stress and consistent adaptation. One of my main wheelhouses is mountain athletics which includes local and visiting climbers, skiers, downhill riders, backcountry hunters and endurance athletes. Another is “tactical athletes,” which includes fire/rescue, law enforcement, mountain/ski rescue, and individuals wanting to prepare for military special operations. Not everyone who wants to train here has to be an accomplished mountain sports or tactical athlete. They do have to be willing to commit, to go the distance and push hard alongside their peers who have a similar understanding.

What are your strengths as a trainer and as a motivator?

I feel that I’m good at being an enabler that understands there are many different paths for each individual to reach that next level. One thing I’ve learned in twenty years as a coach, mentor and team-builder is the significance of helping others progress and with that I constantly strive to offer the greatest training to each member I take on. I accomplish this through teaching, succeeding (and sometimes falling short), experimentation, listening, being restlessly ambitious, leading by example and by constantly expanding my base of knowledge.

What do you love about the work you do?

I love the “mad scientist” aspect of what I do. Similar to my experiences as a father, I’m afforded opportunities to be a motivator, myth buster, educator and a psychic mind reader all in the same day, and sometimes even within the same hour-long training session. Every time someone walks into my gym I know they are going to present me with another puzzle that we get to work through, whether I have four weeks to get them ready, or a year. It’s not like we can adjust one piece of that puzzle and all is well, oh no. We not only have to work on the physiological aspect of training, but also their foundational nutrition, their post workout recovery and their mental toughness.

What is the biggest challenge you face in your work?

I often meet athletes (mainly on the mountain and field sports side of the house) that make the mistake of training for their sport by only doing their sport. This works to some degree for a while, and then things like injuries, boredom and an overall lack of “adequate stimuli” leads to stagnation in their progress. The challenge I face is altering the preconceived notion that training in the gym space only leads to being heavier and as a result, less capable. On the contrary, appropriate programming and training in the gym increases an athlete’s power output, resistance to fatigue, and a durability making them far less likely to get injured and reduces down time if they are.

Can you share a recent satisfying success story or two?

One of my athletes that I’d consider a “success story” is Janessa Bork, a local Mt. Bachelor athlete and owner of ViVi Designs Co. She’s been training with me for a couple of years now and placed first at the Gerry Lopez Big Wave Challenge against some very tough competition. She also won the Women’s Masters Division, and has won a number of the local banked slalom contests. Another of my athletes is Aaron Tiegs, one of the head instructors at Clarks University here in Bend and an up and coming top competitor on the Brazilian Jiu Jitsu scene. He won his last two UFC fight pass fights quickly and confidently.

How have you had to adapt to COVID-19?

It’s been an endurance challenge for the mind, and I’d be lying if I didn’t say that the impact has been anything less than significant. We saw a drop of about 50 percent of the members within the first couple of months alone. The shutdowns had me moving quickly to implement new plans in order to stay afloat despite not receiving a loan, a grant or having any of my business expenses like rent waived.

I turned to remote programming in order to keep the members I still had supplied with training they could do from home. Everyone was caught off guard, so very few had any chance to stock up on home training equipment before everything started selling out. As a solution, much of the remote programming was written so that members could train with items on-hand or no equipment at all.

When we were able to return to in-gym training not much changed as far as 1-to-1 training goes. I already maintain “social distance” as a professional courtesy, even before COVID, and the need to go hands-on with a client or athlete is pretty rare.

As a part of Epoch’s post-COVID contingency plan, we now have an online library with just over fifty programs with the intention of adding a few hundred more. This library covers training for those interested in mountain sports, tactical and general fitness preparation. Epoch’s programs are also purpose built for a whole spectrum of individuals from those with access to a commercial gym to those that have little to no training equipment.

Why is Bend, Oregon your choice location?

It’s beautiful here with plenty of mountains to climb and backcountry to get lost in. I’ve lived in big complex cities like Vancouver, Canada, Osaka, Japan, and more recently Seattle, and found the simplicity of Bend to be good change of pace and safe place to start a family. No frills here, just plenty of trails, mountains and desert for outside activities.