Gary O’Connell of Summit Bank on banking local, working with small businesses, and why he keeps beer and kombucha on tap at work. 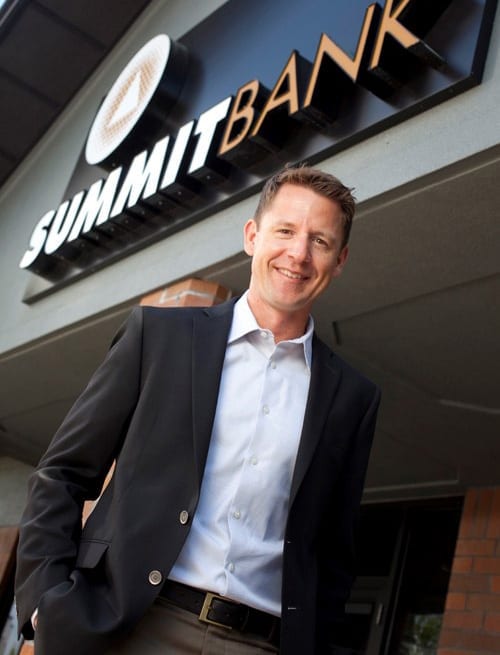 Summit Bank has been recognized in the Top 100 places to work in Oregon two years running. Gary O’Connell, the Senior Vice President and Central Oregon Market President of Summit Bank, is here to tell us why Summit has such high employee retention rates and how it works with local businesses to provide jobs in the community.

Summit has been recognized in the Top 100 places to work in Oregon for the last two years. Obviously your employees are happy here. What are you doing to create that environment?

We feel the best workplace environment is where our colleagues want to be here and nobody feels like they have to be here. There’s a great deal of empowerment. We’re smaller than most banks in this industry, so we are able to be a little bit more flexible in our workplace, in our benefits and in our hours. The financial success has been attractive, but the way that works is we have colleagues who want to be here who are driving that success.

Summit Bank was conceived and launched in Eugene in 2004. What attracted Summit to the Central Oregon market?

A few years ago we started looking at the Central Oregon market and [during the recession] there were eight or more banks that were bought or left the market. So, we thought the community banking market was really underserved in Central Oregon and we thought there was a great opening for us to come in and expand our business model that we had started in Eugene. That means being local, being accessable, not having 1-800 numbers and making people feel welcome when they come in. The next largest bank is over thirty times bigger than we are. So, we feel like there’s a lot of runway to grow because we are relatively smaller.

Our lending philosophy is focused on lending to companies that provide jobs. Small businesses provide seven out of ten jobs in America and that’s roughly the same here in Central Oregon. It’s really fun to help businesses and get to understand them, so we can help them grow and provide more jobs. We’ve heard time and time again from business owners that they want a bank where the bankers understand their business and they can go talk to them when they need to discuss something important.

You just completed a remodel/addition of your headquarters off Colorado Avenue. Is this an indication that Summit is growing locally?

Yes. When we opened in 2015, we did not imagine that, by the end of 2017, we would outgrow our building and need to expand. We doubled our staff from last summer from six to twelve, so it has allowed us to provide more colleagues to provide better and faster service to clients. Unfortunately, it looks like we’re going to outgrow even this expansion by the end of this year. We’ll have to look again for the next expansion. We are looking at all options. It could include expanding this building or it could include another standalone location.

Congress recently acted to soften some of the Dodd-Frank rules that were enacted post-financial crisis a decade ago. How is that decision going to impact your business?

Probably, only marginally. The reason the impact won’t be as great is because as a smaller bank, we think very carefully about not trying to be everything to everybody. We also don’t engage in some of the most heavily regulated lines of business in banking that Dodd-Frank regulates. We stick to core banking services that really aren’t impacted by the Dodd-Frank revisions. What we are really looking at more than the Dodd-Frank would be changes to the regulations calling for increased capital requirements, which is the amount of funding and equity a bank needs to put into its operation that’s required by the regulators.

You have eighteen years of banking experience in Central Oregon. What’s the most rewarding part about your work and Summit’s role?

The most rewarding part is being empowered to make decisions in a way that allows us to be more responsive to clients. I love the work and I love the industry, but I don’t want to be part of an organization that sends clients to 1-800 phone numbers or call centers and sends their credit applications to areas outside of the market. It’s very important for us to be accessible and transparent to our clients and it’s very rewarding that our business model allows us to do that. We don’t think of ourselves as a bank. We think of ourselves as a medium-sized business that just happens to be a bank.

Make a bold prediction about Central Oregon’s economy that will come true in the next ten years.

Over the next ten years, we do anticipate long-term growth in the community, like we have had in the last ten years. I would say that the population could exceed 150,000 by 2030. Bend could become connected to Redmond. I would also say that we will have a vibrant, fully-operational four year university that has grown and flourished and helped the community become more successful too.

Anything else you would like to include that you think is relevant or important to our readers?

Well, I think what’s important to readers is that we appreciate the opportunity to be in this market. It’s very important to know your bank and to understand the value of a local banking institution and its importance to the community. We try and tell people to bank smart and bank local. We hope that message can get out further into the community because we are happy to grow with the community.