Vacancy rates for office, retail and industrial spaces have all fallen below 5% in 2017. 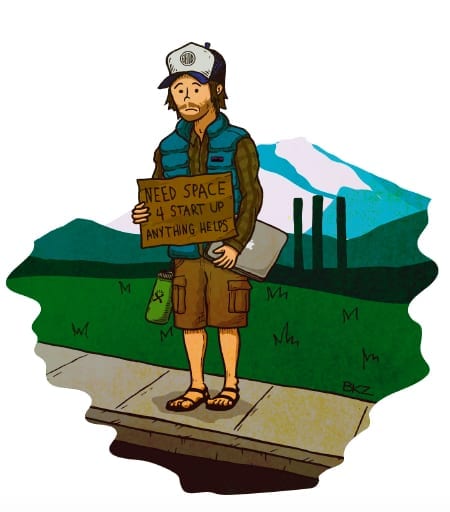 The housing shortage may be the most talked about issue stemming from Central Oregon’s population growth, but renters aren’t the only ones feeling the pinch. With historic low vacancy rates for office, retail and industrial spaces, businesses are also facing a shortage of leasable space that, in some cases, has hampered plans for growth and stymied relocation efforts that are key to the region’s economic growth.

Bend’s vacancy rates for office, retail and industrial spaces all fell to below five percent in 2016 and continued to drop in the first quarter of 2017, according to reports produced by Compass Commercial. In comparison, Portland’s vacancy rate was reported in the eight percent range in 2016. Boise and the surrounding area had a 10 percent vacancy rate.

Though some businesses may have a hard time finding space, the high occupancy is indicative of a strong local economy, according to Howard Friedman, partner and principal broker at Compass Commercial in Bend. “It’s an incredibly healthy market right now,” said Friedman, “which bodes well for owners and sellers, but not for tenants and buyers.” Friedman predicts that these numbers won’t be changing anytime soon. “We don’t see vacancy rates going up for at least the next couple of years, at least not unless something changes with the economy that’s bigger than our little bubble here,” he said.

He described the market as a bell curve, but where the peak is—where both landlords and tenants are happy—is hard to quantify. “It’s hard to predict,” he said. “I don’t know if there is a way to figure out the middle ground.”

Jon Davis, CEO of the software company Shape, started his hunt for office space around Christmas last year. Davis, 33, founded Shape in 2014. The company specializes in managing paid internet search campaigns, known as pay per click, or PPC. With venture seed funding, it’s grown from “me in my kitchen with a couple part-time developers” to a full time staff of seven, he said. With that growth came the need for office space.

“We are in software, and people could get their jobs done remotely, but there’s still a lot of power to people being in the same room,” said Davis.

The search took him months, and he came up against a range of hurdles. “The risk factor on a software startup kind of scares landlords,” he said, citing the possibility of not having enough positive cash flow for an extended period. Another factor, Davis believes, is his age. “You get enough of those red flags working against you, it gives people that own buildings enough cause for concern.”

From his side, Davis was sorting through low inventory, expensive square footage and long lease terms. “Eventually, we found a spot we were super happy with, and got really lucky,” he said. “But we didn’t go through any traditional means.”

Four months into his search, Davis was in Bond Street Market buying beer. The cashier, a friend, asked him if he was still looking for an office. As it turns out, the office space above the market had just become available. Davis jumped. “The paperwork was done in three days without any agents involved,” said Davis. “For us, it was serendipitous.”

Stories such as Davis’ concern Roger Lee, the executive director at the nonprofit organization Economic Development of Central Oregon (EDCO). It is Lee’s job to attract companies to the region and help grow the businesses that are already here. Lee’s team works to ensure that there are enough jobs, especially good paying jobs, for all the people moving to Central Oregon. Lee said that space is one of the top three challenges facing new businesses in Bend, and points to problems that began with the Great Recession in 2008.

“We’ve had consistent population growth, consistent job growth, GDP growth, and hardly any construction on the commercial and industrial side,” said Lee. “It was pretty easy to see that this was coming.” He explained that the problem seemingly created itself. “Some of the reasons we’ve been able to grow so quickly and be at the top of growth charts is that we’ve had existing space to occupy,” said Lee, but that inventory is almost gone.

He explained that it’s not just low vacancy rates for business buildings that will cause some economic uncertainty. “That in combination with housing [low vacancy rates] is creating pressures we’ve never seen in Bend before.”

Lee does see some relief on the horizon. The City of Bend’s recent Urban Growth Boundary expansion will add 815 acres of buildable plots that can accommodate more commercial and office space—but that may take years, as infrastructure such as sewage systems and roads need to fill in first. In the meantime, Bend’s population base, already among the fastest growing metro areas in the United States, will continue to mushroom. (Long-term estimates put Bend’s population at more than 135,000 by 2035.)

“We kind of look at it as a short-term imbalance that will get resolved in the intermediate term,” said Lee. He acknowledged that throughout this “intermediate term,” Bend and Central Oregon could be affected more by any economic recession that occurs during that timeframe.

“It could definitely put the brakes on job growth and economic growth, as well,” he said. “That talent and that workforce will migrate somewhere else, where they don’t have that constraint of space.”