You are here: Home / Adventure / Going the Extra Mile(s) with Bend’s Ultrarunners

Mount Ashland, 4:40 a.m.—With the sun still hiding behind the evergreens, nearby speakers sparked to life as music blasted to shatter the calm. Rolling out of bed, Nic Feldkamp rose to find dozens of people milling about before the start of the 100-kilometer Siskiyou Out Back Trail Run. For many, the idea would be a nightmare. Yet this breed of runners appeared happy. The group would soon set off to run for almost seventeen hours starting at 5 a.m. Feldkamp’s 50-kilometer (31-mile) race would begin an hour later. 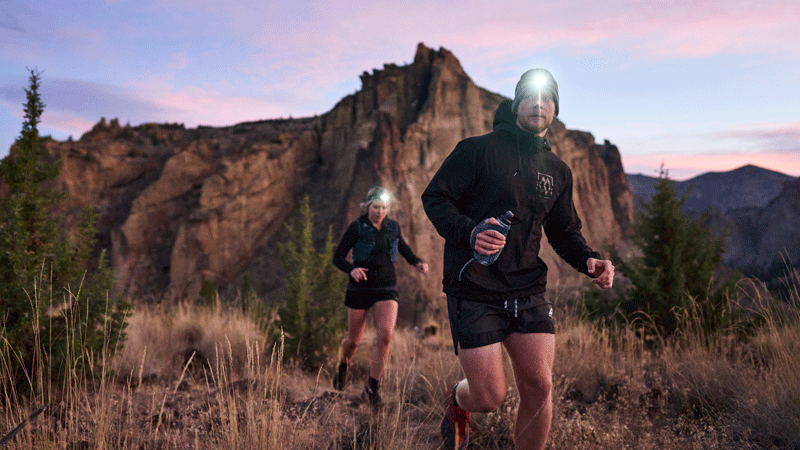 Training runs for Ashley Sharpe and Brandon Stutzman may begin before sunrise.

Ultramarathon participation has boomed across the country and globe—the largest study on ultrarunning done by Run Repeat in conjunction with the International Association of Ultrarunning showed participation in ultramarathons had increased 345 percent in the decade leading up to 2018. Oregon’s mountains and trails are a hotspot for ultrarunners and those interested in pushing their bodies to the limit with early wake-up times, late nights and hundreds of miles of dirt caked on their soles. Running 31 miles, 50 or 100 may seem insurmountable, but ultrarunners say it’s not much different from a marathon except for a change in perception and a few key things.

For those who have the itch of desire to run ultra distances, much of the battle is already won. “If you want to do it, I honestly believe you’re already ninety-percent of the way there,” said Feldkamp, who works at FootZone in downtown Bend and who has completed five ultramarathons—a run of any distance beyond a marathon at 26.2 miles.

“I think there’s a lot of merit to that,” said Dr. Lindsay Ross-Stewart, a sports psychologist and director of mental performance for Southern Illinois University Edwardsville, Illinois. Ross-Stewart acted as thesis advisor in 2022 to ultrarunner (and master’s student at the time) Megan Meckfessel. The study compared the difference in psychological skills between ultra-endurance athletes (those who had completed at least one ultramarathon, Ironman triathlon or a competitive cycling or swimming event lasting longer than five hours) and endurance athletes (those who competed in events such as marathons, triathlons, road races and cycling events) and was published in The Sport Journal. The study found the psychology between the two groups largely similar, but there were several differences. Ross-Stewart said, “When it came to motivation related to drive, ultra-athletes had a higher drive and then also persistence.” She added, “It’s not about being fit. It’s really about the psychological excellence.” The psychology behind running an ultramarathon, and the dedication to pushing human limits, is one of the main lures for many runners like for ultrarunner and clinical sports psychologist Cory Nyamora, who holds a doctorate in clinical sports psychology. “One of the draws is just seeing what your mind can do,” he said. “Training your mind to deal with the ups and downs and just keep going.” 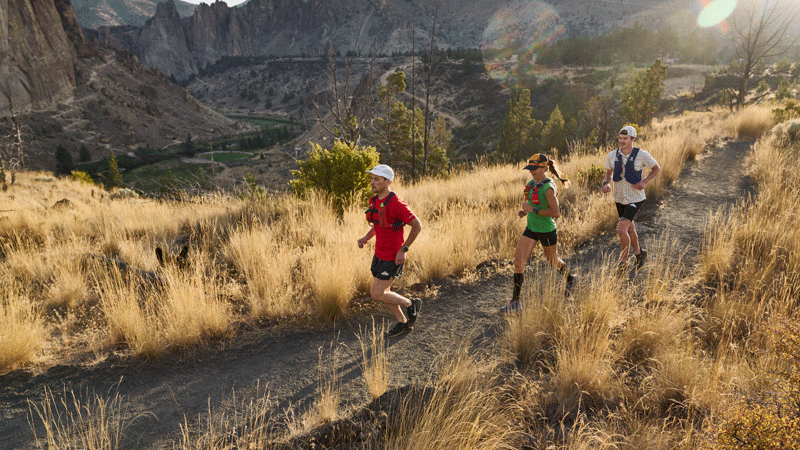 The resilience and dedication needed to finish an ultra often boils down to finding your “why.”

In his first 100-mile ultramarathon—the Fire Fest Ultra in Nevada—Brandon Stutzman, an ultrarunner from Bend, made it 59 miles before calling it quits. Much of his inability to finish, he said, was because he didn’t have a clear reason for running the race. Before signing up for another, he found his “why”: To raise money for the Bethlehem Inn, a homeless shelter in Bend and Redmond where he’d lived with his family for a few months in 2011. In April, 2022, he successfully ran 100 miles on the Dry Canyon Trail in Redmond and completed 1,000 pushups and 1,000 pull ups in thirty-three hours to raise $14,500 for the shelter. For him, the running challenge was relative. “It’s not hard to run a 100-miler,” he said. “It’s hard to be homeless.” 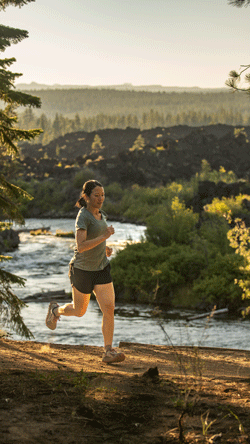 The trajectory to the start line of an ultra-endurance race is similar for many athletes. Many begin with 5k and 10k races before moving up to half marathons and marathons. Michelle Abbey, an ultrarunner in Bend, picked up running in her thirties. She started with a 10k mud run with a friend, then tried a half marathon and a full marathon. From there, she spent some time on triathlons before deciding to focus on running, where she began with a 50k, then a 50-miler and a 120-mile stage race. “I am that person who’s always in the back of the pack. It takes me forever. I’m chasing cutoff times,” she said. “But I do it. I think the reason it appealed to me in the first place is [because] I’m not very fast.”

It isn’t always the fastest who wins, it’s simply the one who can keep going the longest, which is the concept behind the Lastest Not Fastest—a last-person-standing trail race in Tumalo organized by Renee and Todd Janssen of Go Beyond Running and taking place in October. The rules are simple: Finish one 4.5-mile loop every hour, on the hour, as many times as possible. If you finish the loop in thirty minutes, you then have thirty minutes to relax before starting the next loop. If you finish in fifty-nine minutes, you then have one minute to rest. The race continues until there’s a single runner left. “It’s an unusual format,” Renee Janssen said. “But the thing about it is that it’s a good event for people who are looking to do their first ultra distance.”

It’s not just mileage numbers that are high. When it comes to nutrition, the rules are pretty straightforward: eat more than you think you should. “More often than not,” Abbey, who is also a registered dietitian nutritionist in Bend, said, “people just don’t eat enough.”

Much of this is due to the physical stress of training, which can reduce hunger. Claire Shorenstein, a board-certified sports dietitian and host of the Eat for Endurance podcast, emphasized how important personalized nutrition is, especially for longer distances like ultra-marathons. “We have very limited stores of energy in our body in the form of carbohydrates,” she said. When your body runs out of fuel, it will result in the infamous “hitting the wall” or “bonking” where runners do not have enough in their system to continue running.

Most people, she said, struggle to consume a recommended sixty to ninety grams of carbohydrates per hour, and it can take a lot of preparation to train the gut to handle such amounts during a long race. Nutrition training takes place along with mileage training. Additionally, dehydration “is a big deal,” Shorenstein said. If runners don’t replenish the sodium, electrolytes and water they lose through sweat, it can dramatically affect a race. This becomes even more pronounced at altitude, where many ultras are held, when hydration needs can be twenty percent higher.

With all the different nutritional variables at play during an ultra-endurance race, aid stations look different from those found along a marathon route: “There’s a whole buffet of food,” Shorenstein said. Abbey agreed, “It’s like a picnic…potato chips, peanut butter jelly sandwiches, bacon sometimes, potstickers. There’s all kinds of weird stuff out there,” Abbey said. Plus, it’s important to find food for the individual that won’t mess up their stomach. This can be an important factor in whether someone finishes a race. “There [are] about as many different strategies to nutrition for ultrarunners as there are phone numbers,” said Brandon Mader, a competitor and race director for the Timberjack Ultramarathon held in the Deschutes National Forest each September. “Sometimes it just really takes a while to dial in what works for your body.” 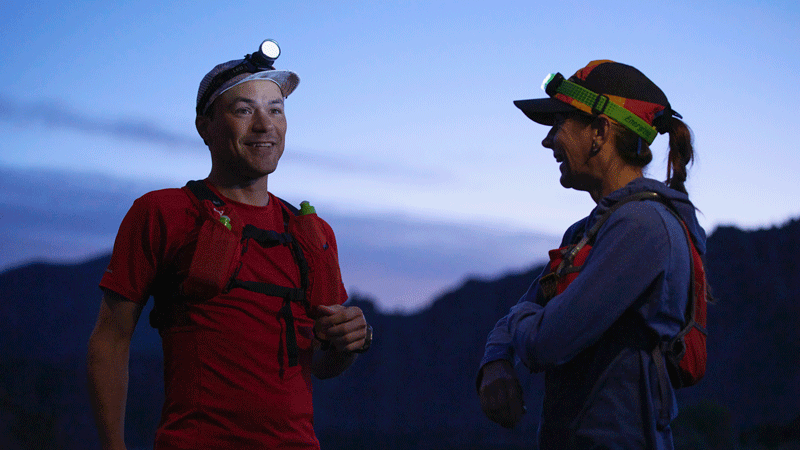 Running such a high number of miles can be a solitary activity, but the unique sport of ultrarunning creates a community of like-minded athletes. “The first day you went out there and decided to start to run, did you ever think that you’d be running marathons?” Ross-Stewart said. For support, she suggests leaning on the ultrarunning community—the same people that woke up with smiles on their faces at 4:40 a.m. along with Nic Feldkamp. It takes focus, persistence, and being thoughtful with training to compete at this level. “It’s just amazing,” Feldkamp said, “what the human body can do.”