You are here: Home / Home / Jacob Riggle Showcases His Work on the International Stage 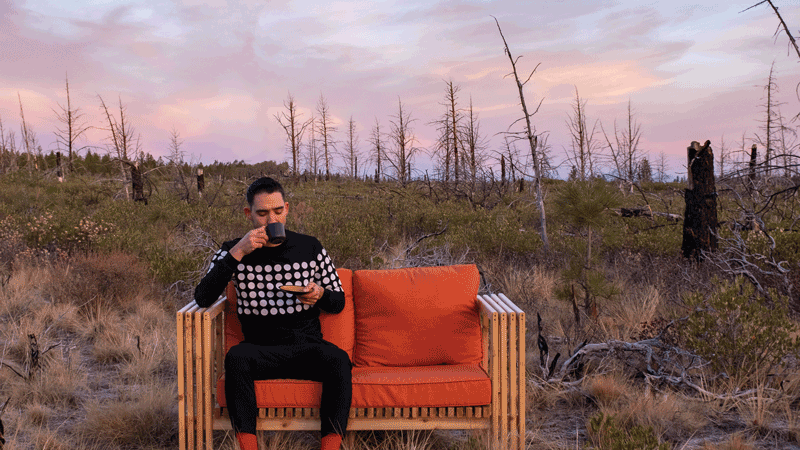 Traveling to Milan, Italy and displaying his work at SaloneSatellite 2022, a showcase for designers under the age of thirty-five, helped emerging Bend furniture designer Jacob Riggle take his work from a home studio to the international stage. Riggle, a professional graphic designer by trade, made his first piece of furniture in 2010 as part of a 3D design class. The geometry of his work was informed by his explorations of engineering as an original career path. In his current work, Riggle combines sculptural elements with functional form using clean lines and angles. Riggle’s first design prototype was for the “Piixel” [sic]—a shelving unit with stair steps, in an interpretation of shape in the same way images are seen on a computer screen. “I wanted to take it out of a digital context into a furniture form using stairs,” Riggle said.  His most current prototype “Sllat” [sic] is a patio loveseat that emphasizes form with a repeat of a design element—in this case, slats of wood. A self-taught furniture maker, Riggle said the international showcase was an opportunity to get out of his comfort zone and have both the exposure to potential manufacturers and the education from the company of other designers. The showcase was part of Salone del Mobile di Milano, one of the world’s largest furniture fairs. Now back in Central Oregon, Riggle plans to continue to update and refine his work. See jacobriggle.com.