You are here: Home / Culture / Jamie Brown Is One of the World’s Best Paratriathletes

Jamie Brown, a sprint paratriathlete, is climbing the ranks of the sport and aiming for the 2020 Olympics. 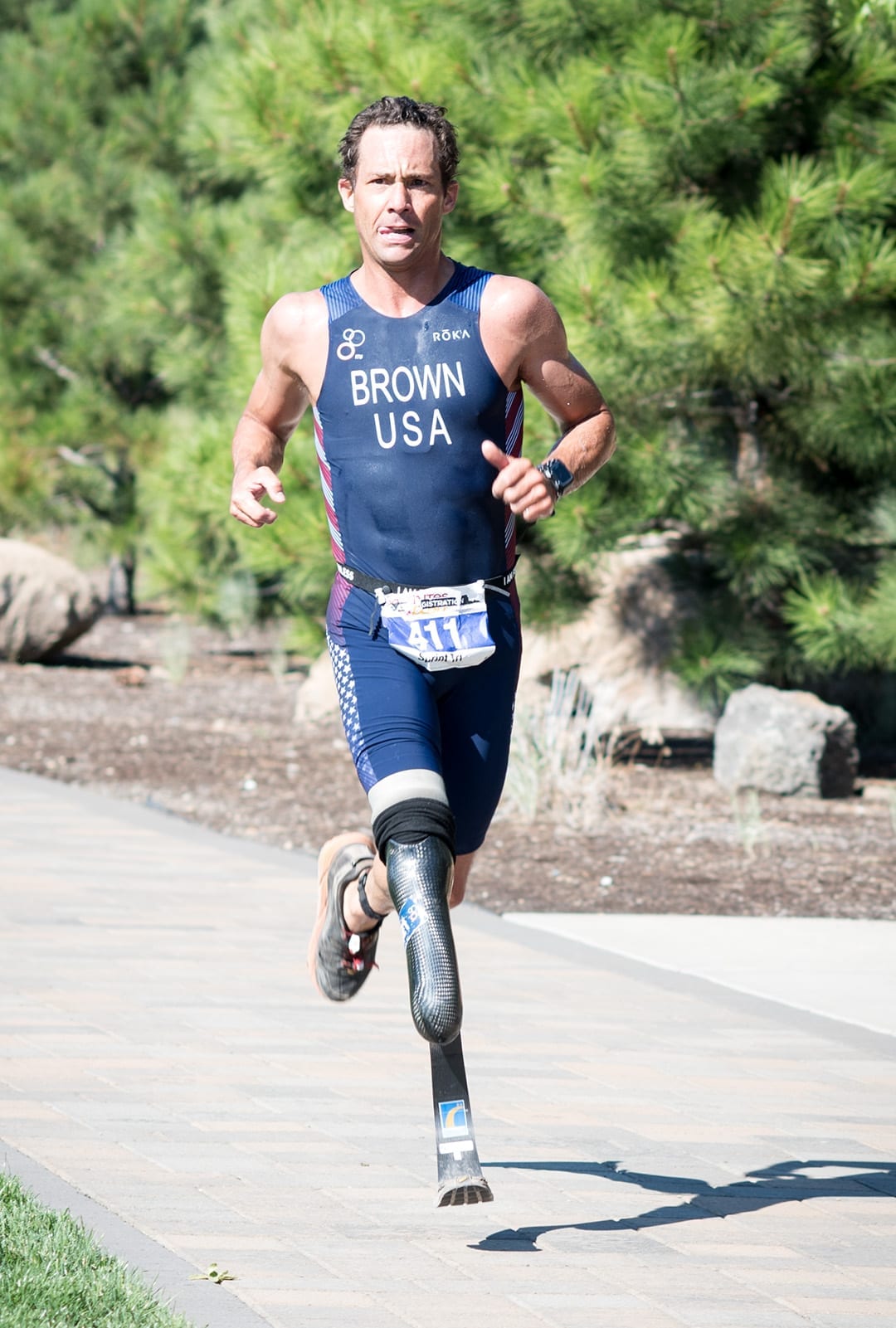 Run, cycle, swim—every day. That’s what it takes to stay faster than almost everyone in the world. Just ask Bend’s Jamie Brown, who has been doing it for the past eight years while climbing the ranks of the world’s best sprint triathletes.

Sprint triathletes race a truncated triathlon that includes a 20k bike leg and 5k run. A multisport event, the sprint triathlon is to the Ironman what the 100-yard dash is to the mile race in track and field. It takes a special kind of athlete and a certain mindset to succeed in a race that is part endurance race and part mad dash.

“I guess I have always just liked pushing myself and my limits,” said Brown. In March, he won the continental championships, and he’s currently training for the New York City Marathon. He’s done it all without the benefit of a right leg. Brown was born without a right fibula, but he’s never allowed it to slow him down. An early surgery set him up for a prosthetic lower leg. He started playing sports like everybody else, always competing against able-bodied athletes. Eventually, he was pitching in the Division III College World Series for Chapman University in California. “It never registered as ‘I’m the disabled kid,’” said Brown.

That kind of can-do mindset has served him well throughout his life. When he turned his focus to paratriathlon races roughly eight years ago, it didn’t take long for the results to follow. Since then he’s amassed an impressive list of achievements at the national and international level, including gold medals on the world championship level. Athletic ability and a fiercely competitive spirit have brought him success, but Brown credits his wife, also named Jamie, for her unwavering support. “I most likely would not be able to compete at this level without her motivating and pushing me to go swim every morning.”

With each season comes another set of obstacles and another set of opportunities. Later this year he’ll be in the Escape from Alcatraz triathlon, plus racing in Japan and on Australia’s Gold Coast. The ultimate goal is the Olympics. Brown narrowly missed qualifying for the last summer games in Rio de Janeiro in 2016. His recent successes have only added to his determination to qualify for the Tokyo 2020 Paralympics.

Talent and a loving spouse propel him far, but Brown’s essential strength originates in positive thought. “The further you go in sports, the more challenges and adversity you are going to have to encounter,” said Brown, who until a recent rule change, found himself racing alongside para-athletes who had both legs.

“It doesn’t matter how many parts you’re missing,” he said. “Mind state is critical.”

“I’m pretty big on practicing sports psych and visualization. With endurance sports, you’re consistently going, and, sure, when you’re hurting, negative things start to fill your head,” he added. So, as part of his training, Jamie imagines himself in those scenarios. “It allows me to create ways to resolve these feelings.”

Brown isn’t the type of competitor who hoards his knowledge as a competitive advantage. He coaches other para-athletes, like the nation’s best (and world number two) above-the-knee amputee, Mark Barr. Jamie also works with local youth triathlon camps and is creating a team of young triathletes alongside Ironman coach Jaime Dispenza. Meanwhile, Brown and his wife lead adult fitness classes in Bend, including family-specific group workouts.

Advice from one of Bend’s top athletes? “Eat right, get sleep and allow your body to recover.”