You are here: Home / Business / Jim Schell is 83 and still building a better Bend

At age 83, serial entrepreneur is still building a better Bend. 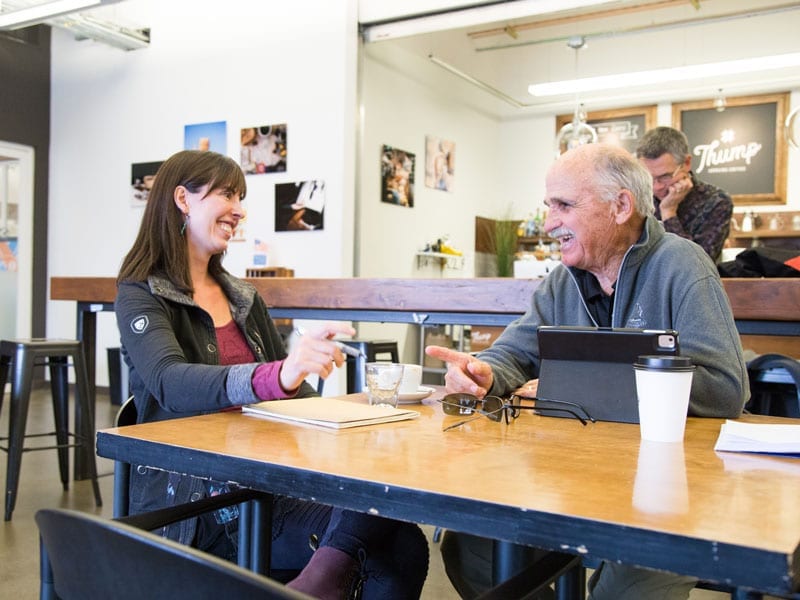 Thump cafe at BendTECH’s coworking space buzzes with the caffeinated energy of tech, collaboration, networking and entrepreneurial growth. It’s not where you’d expect to find the average octogenarian. But it’s the place where Jim Schell feels most at home. At age 83, Schell continues to be a driving force in shaping Bend’s growth as a premier place to live and work, fostering the success of the startup community as well as guiding nonprofits that boost the area’s quality of life.

It began three decades ago after Schell moved to Bend, having built up sporting goods and screen-printing businesses in Minneapolis. He’d already gone through the agonies and ecstasies of becoming an entrepreneur, and had benefited from Vistage International, a peer mentoring organization for CEOs, business owners and executives of small- to mid-sized businesses. But it was expensive.

“I loved the business model of peer-to-peer groups, but I knew it was out of the price range of 95 percent of Bend’s entrepreneurial community,” he said. So he created Opportunity Knocks, a nonprofit that helps Central Oregon businesses leaders succeed by pairing them with a local peer-mentoring team.

“Entrepreneurship is a lonely, lonely profession,” said Schell. “Your spouse doesn’t understand what you’re doing, employees react and can’t give guidance, but by putting entrepreneurs together in a room, in essence as an advisory board, they can be held accountable.”

Since Schell founded O.K. in 1996, it has served nearly 500 organizations, he said, which has improved the work lives of about 10,000 employees. That’s Schell’s measure of a successful nonprofit.

He used O.K.’s success as a springboard to launch a series of local nonprofits, including the City Club of Central Oregon and Volunteer Connect. He served as executive director and director of development of the Partnership to End Poverty for five years, until 2012, and as board chair of Boys & Girls Clubs of Bend in 2014.

He’s written eleven books, such as: Small Business for Dummies and launched an online publishing company. He continues to offer guidance to uber successful Humm Kombucha, where he has been board chair since 2014. Since 2016, he’s served as advisory board chair for Sudara, a loungewear company launched from Bend which supports living-wage jobs and training for women in India.

Preston Callicott, chief executive officer of Five Talent Software, has gotten to know Schell through O.K, and community endeavors such as Looking Forward.

“At 83, he makes me feel like I’m standing still,” said Callicott. “He’s one of the busiest retirees I’ve ever met. He’s extremely wise about business and the undercurrents of what makes a community good, fostering that good and rallying not just support, but also energy for that support.”