You are here: Home / Food & Drink / Beer & Libations / May The Abyss Be With You

The annual release of The Abyss, Deschutes Brewery’s barrel-aged Imperial Stout, is practically a holiday for dark beer lovers. At both the Bend and Portland pubs, special menus were created with entrees and desserts to complement this complex and decadent beer. It was so popular that the wait at the pub prevented me from getting a taste on release day. 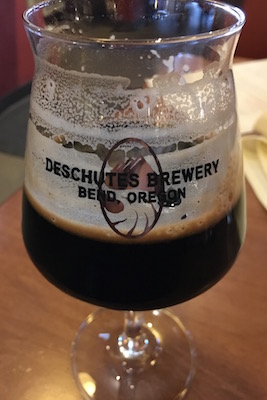 The following afternoon, my luck was a little better. I think it worked in my favor, as it was the day the new Star Wars movie was released and the pub was embracing the power of The Force. Core beers were renamed based on the Star Wars theme, and special menu items were offered as well. The dark chocolate Stormtrooper Tiramisu paired exceptionally well with the young, but already delicious, 2015 vintage. Served in a snifter, The Abyss is a roasty blend of flavors including chocolate, bourbon, and tobacco.

For the truly dedicated, a flight of several vintages of The Abyss is also available. Last year I made a solo attempt to enjoy the six-sample flight. It took hours, and I enjoyed every sip, but it was just too much of a commitment for me this year. Next time I will plan ahead better, and invite another dark beer loving friend to join me. The smaller, three-sample vertical tasting offered at the brewery was a more do-able feat. Comparing the vintages is an interesting undertaking, and itís a great way to see how the aging process changes the flavors over time.

Wax sealed, 22-ounce bottles of The Abyss are also available for a limited time. In Central Oregon you can find them at most grocery stores and bottle shops in addition to the Deschutes Brewery Tasting Room and Pub. I highly recommending buying two: one for now, and one to save. Be sure to save room in your cabinet for two other bombers since there will be Rye Whiskey and Cognac versions available soon to celebrate the tenth release of The Abyss.

Share This Article
« Day Trip to Sunriver
How Should Troy Field Be Used? »