You are here: Home / Home / A Family-Centric Mid-Century Home in Bend

A remodel brings this mid-century home back to its prime and offers more function for this Bend family. 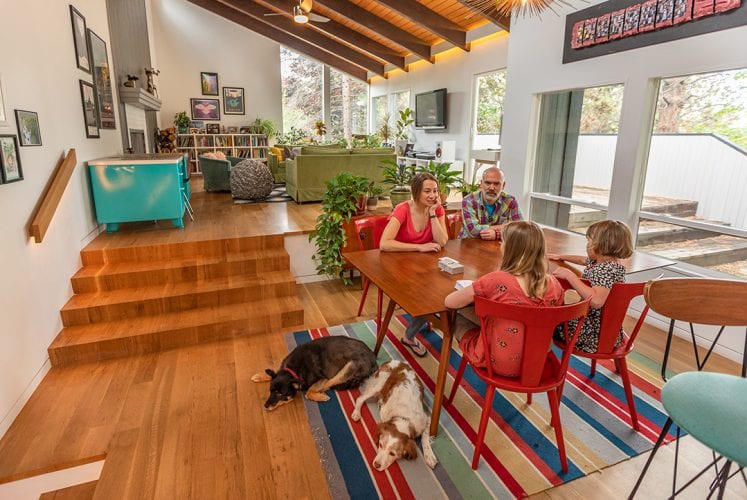 When Abby and Bill Caram bought their mid-century home in Bend’s Orchard District in 2015, they knew a remodel was in their future.

“The house was beautiful when we bought it, but it had undergone many non-professional remodels,” Abby said.

The Carams loved the neighborhood, which grew up around St. Charles Hospital after it moved to the east side in the 1970s. They believe the house was custom built for a physician who needed to be near work.

For advice on the remodel, they turned to their close friend, Erich Hohengarten, described by Abby as “a great mix of engineer, artist, designer and contractor.” Hohengarten dismisses those credits, saying he’s foremost an artist with experience in the building trades. The trio worked out a collaboration—Bill and Abby would serve as the general contractors, pulling permits and other functions of a builder, and Hohengarten would be the consultant and interior designer. The couple who juggle careers and family (Bill works for Deschutes River Conservancy and Abby is the operations manager at BendFilm) spent almost a year discussing the project, which gave the Carams time to try on ideas and modify the scope as their needs and wants evolved. 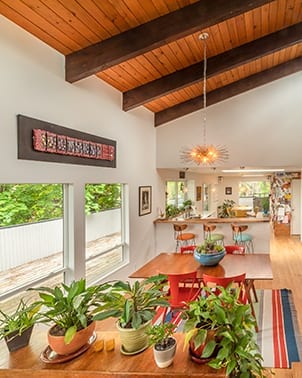 The first thing they did was examine the floor plan and how spaces were used. “I’d ask myself, ‘What is it that’s missing to help it flow and function better?’ ” Abby said. The group decided to leave the layout alone, including bedrooms and baths, but they would add a mudroom. The windows had been updated, and the structure was solid. But multiple remodels had left the interior with mismatched doors, poorly laid tile, multiple flooring materials and a mix of wall textures and patches.

“One of the primary goals was to bring all the finishes to a much higher standard, something we all felt the original layout of the house was worthy of,” Hohengarten said.

An overarching theme was to design around the family’s active lifestyle which includes two daughters, two dogs and a cat, as well as keep their aesthetics in mind, which lean toward clean and cohesive contemporary lines with a nod to the home’s mid-century roots. 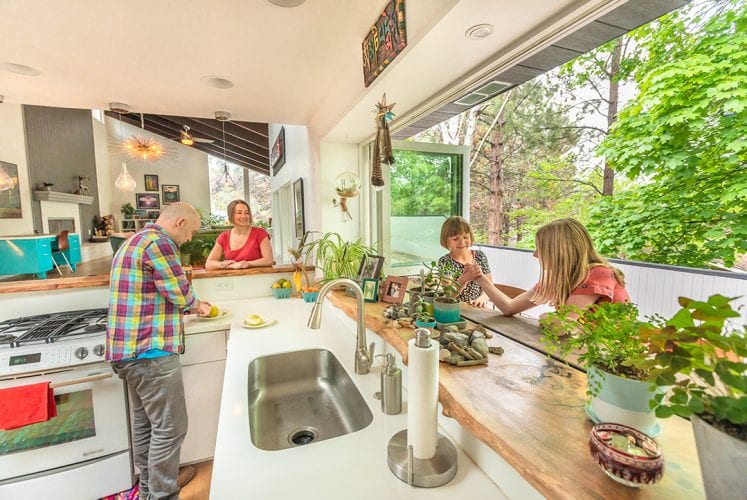 In the kitchen, the couple chose to replace a small vinyl window above the sink that overlooked the deck. They selected a much larger and screenless accordion window to create an expansive feeling of indoor-outdoor living. The girls, Adele and Margot, often eat breakfast outside on the deck while mom and dad pass food back and forth. The new windowsill is made of live-edge Northern California oak.

“If you stop by in the summer months, this beautiful window is open all the time,” Hohengarten said.

The accordion window also meant that wall cabinets had to be torn out, precipitating a cascade of other changes. The family sacrificed part of the two-car garage to add a mudroom and kitchen pantry to make up for the lost cabinets and to increase storage. They refaced all the remaining kitchen cabinets, even encasing the refrigerator to create an entirely white wall. A unique feature of the kitchen is the floor-to-ceiling wall of cork. 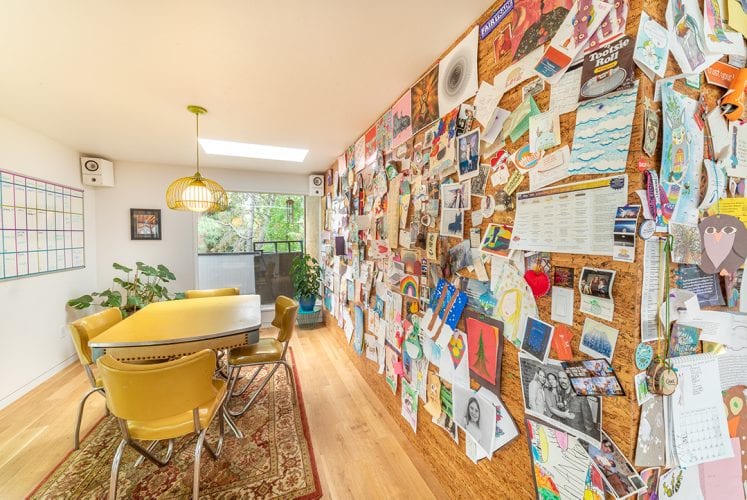 “Bill had purchased a quantity of cork flooring that he really liked for the downstairs master bath and bedroom,” Hohengarten said. “Once we decided to install white oak floors in the whole house, we repurposed the cork as a wall cladding in the kitchen.”

This now serves as a large cork board for the girls’ art, adding color and a playful feel to the space.

A favorite feature of the new floor is the “wood waterfall” pattern on five steps leading from the dining room into the living room. The wood grain flows in a vertical pattern instead of across the steps in a typical horizontal configuration. Other unifying elements involved painting all the walls but one white, removing all the trim and recessing the baseboard so that it is flush with the wall.

“To the untrained eye, this small detail is what gives your sixth sense the feeling that the space is very svelte and streamlined,” Hohengarten explained. 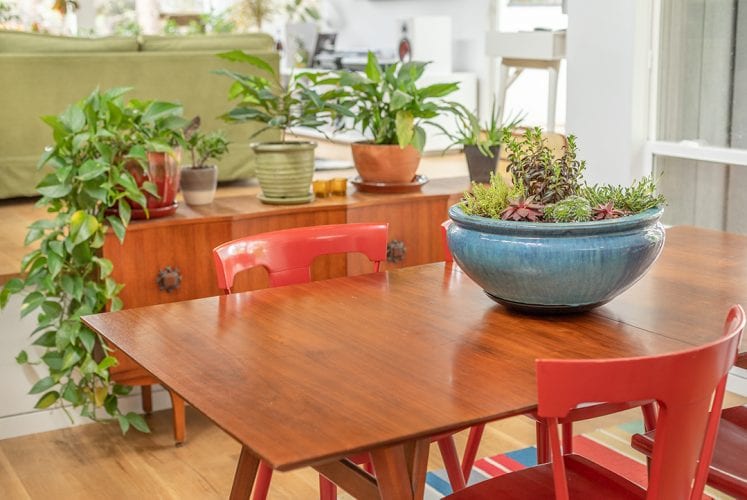 The spacious living room is filled with natural light from two large angled windows and several clerestory windows on either side of the wood-burning fireplace with a gray wall and an old-fashioned metal mesh screen. Even though the house has nearby neighbors, large trees provide a natural privacy screen and the feeling of being in the woods. Abby took full advantage of the natural light to grow numerous house plants, which she says do well because of the light and not any green thumb on her part.

The room has all the comforts of a family gathering space, including a special desk Abby bought for a new pastime, jigsaw puzzles. Light fixtures, furniture, and art add pop and color. A Sputnik-style chandelier that came with the house is a focal point in the dining room, and another retro light pendant adorns the informal kitchen nook above a ’50s-era yellow Formica metal table and chairs.

The house is filled with original artwork the couple has been given by their many friends in the art community. A nice touch includes new square glass doorknobs throughout the home. Entrance to the multi-level dwelling is over a driveway where the family parks its RV, their temporary home during remodeling. They replaced the former front door with two contemporary clear-glass window-pane doors that let light into the foyer. A favorite wood carving by Sisters artist Dayton Lanphear greets visitors as they enter this uniquely Caram home.

In the end, the couple achieved its goal of striking a balance between form and function. Bill’s advice to others?

“Have a vision for the whole house, and if you can, do it all at once, especially the floors,” he said. “It’s lovely to live in a home that matches one’s personality.”